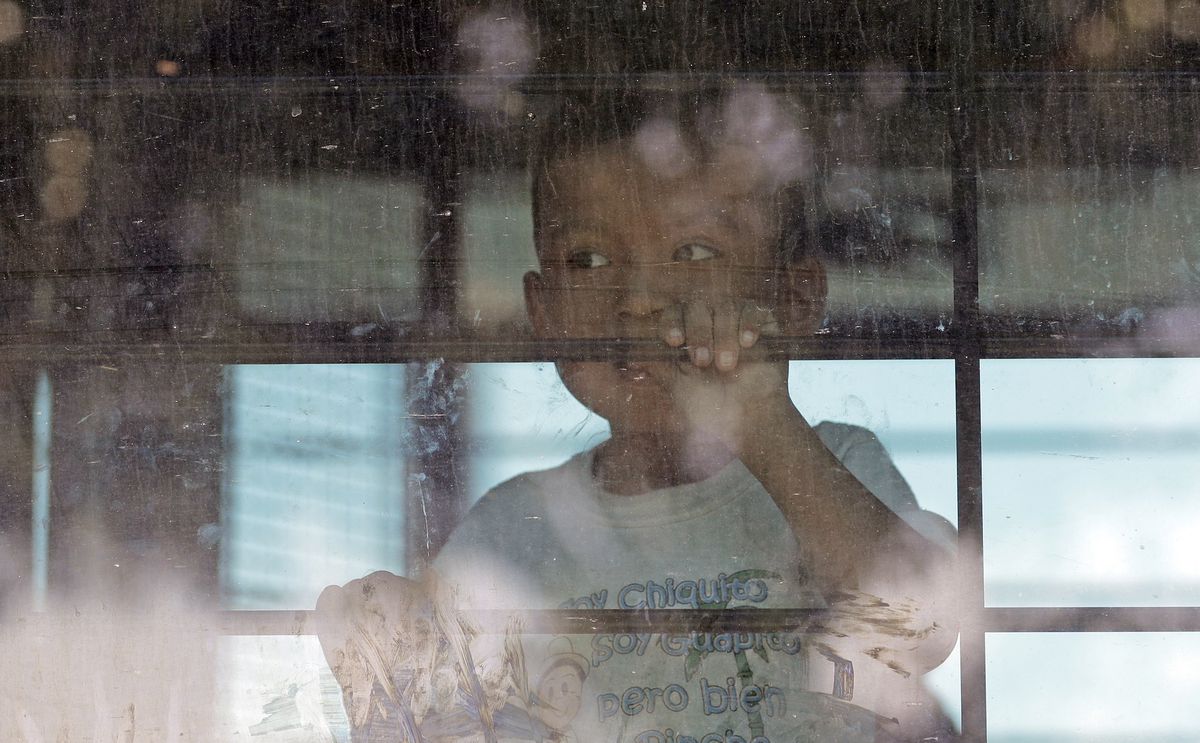 File - In this June 23, 2018, file photo, an immigrant child looks out from a U.S. Border Patrol bus leaving as protesters block the street outside the U.S. Border Patrol Central Processing Center in McAllen, Texas. Immigrant children described hunger, cold and fear in a voluminous court filing about the facilities where they were held in the days after crossing the border. . (AP Photo/David J. Phillip, File)

File - In this June 23, 2018, file photo, an immigrant child looks out from a U.S. Border Patrol bus leaving as protesters block the street outside the U.S. Border Patrol Central Processing Center in McAllen, Texas. Immigrant children described hunger, cold and fear in a voluminous court filing about the facilities where they were held in the days after crossing the border. . (AP Photo/David J. Phillip, File)

“Imagine all the people, sharing all the world.” -- John Lennon

It is, of course, the baseline division of human existence, probably dating from when the first person sparked the first fire. It’s a division that has been painful, bloody -- and useful. Particularly in American politics.

"Vote for me," goes the ageless, implicit appeal, "and I will protect us from them" -- whoever "them" may be at any given time. Right now, "them" is, among others, anyone from south of the border who shows up on America's doorstep seeking sanctuary.

And it might be good to spare a thought for "them" as the nation -- or at least, the three-quarters of it that identifies as Christian -- makes the turn into that faith's season of light, compassion and hope. As the halls are decked and the joy bells chime, as songs of fellowship ring in the air, it seems an apt time to ponder a tweet from a few days back by one Larry L. Sandigo.

He's an immigration lawyer in Arizona who works pro bono for a nonprofit legal services organization, the Florence Immigrant & Refugee Rights Project. And his tweet, retweeted over 47,000 times as of this writing, went as follows: "In court this morning, I asked the judge if my client could wait outside. She was being fussy. He said yes, and she was carried out. Even then, I could hear her whimpers and cries. She's 2 years old. She had on a pink coat. Today was her deportation hearing."

And here, someone is piping up in protest with harsh platitudes about limited resources and all the evil that immigrants bring. By these rhetorical means, that someone will try -- and fail -- to shout down those things we know.

It's an old dance. We've done it many times before. But it feels especially poignant to do it now, as Thanksgiving recedes and people begin to string their houses with light. We prepare ourselves for Christmas, a season celebrated as the birth of a divine baby who grew up to warn that, "Whatever you do unto the least of these, you have done it also unto me."

Meantime, babies go to court. And is that irony one smells? Or just the faint reek of hypocrisy?

Here's what we've never quite understood about "us" and "them": Race does not define it. Neither does religion, sexuality, geography, gender, education or money.

No, the only "us" worth talking about is the "us" of people striving for the courage to see community in difference, their own humanity staring out from the eyes of the Other. And the only "them" worth striving against is the "them" of people who lack that courage, who find it easier and safer to live within division.

This is the sermon Martin preached. It is the song John sang. And it is the life that divine baby lived. "Love your neighbor as yourself," He said. Yet, it remains a lesson learned imperfectly at best, as evidenced by the very fact of a court hearing to turn a baby away from America's gates.

As the halls are decked.

And the joy bells chime.

And fellowship songs ring in the air.