Notre Dame and tankers of water 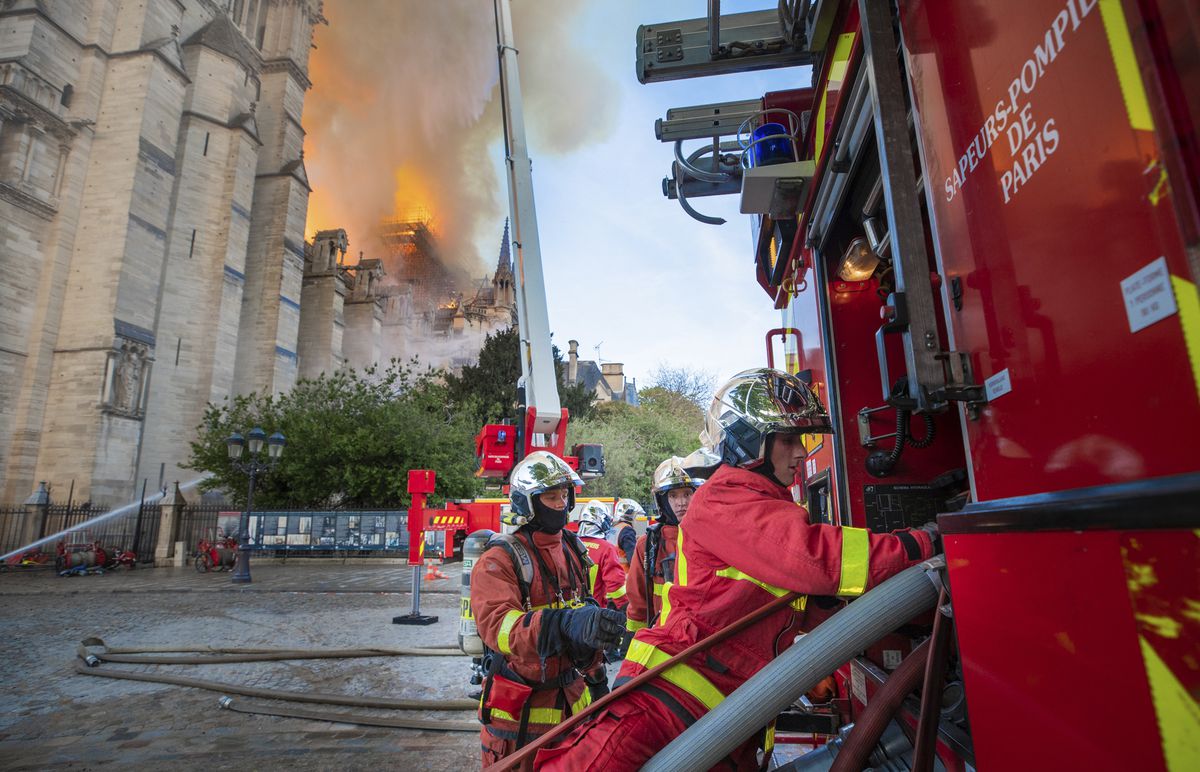 WASHINGTON -- At least he recognized the urgency.

As the world gasped in horror on Monday at the sight of Paris’s Notre Dame Cathedral burning in a cataclysmic moment, the president of the United States imparted these words of wisdom: “Perhaps flying water tankers could be used to put it out. Must act quickly!”

Well, Jesus, Mary and Joseph. Could we possibly be more banal?

Ever too-soon to the tweet, Donald Trump didn't think before typing -- or worse, he did. Mightn't a clever president -- or one of his staffers -- suffer through a brief Google search before launching? Or, better, skip the Quick-Fix-It blurb and say something normal? How about: America's heart breaks for Notre Dame. Instead, the French civil defense agency tweeted back that "water-bombing" the 850-year-old cathedral could "lead to the collapse of the entire structure."

Pope Francis, whose words the Catholic world especially wanted to hear, waited several hours before offering his considered remarks in a public letter to the archbishop of Paris. Appropriately, Francis expressed sadness and offered prayers. No mention of a squadron of angels dragging tidal waves to Paris to extinguish the flames.

Meanwhile, the rest of the world watched in silence, muted by the horror of the unthinkable -- the disintegration of one of the world's greatest monuments. The fire consumed much of the roof's wooden latticework, which was called "the forest" because it took 52 acres of oak trees to build it. Begun in 1163 during the reign of King Louis VII, the cathedral took nearly 200 years to construct. It only took 12 hours of blistering flames to reduce its core to ashes.

The weight of the symbolism -- layers upon layers -- is almost too much to bear. Millions of words by now have been spilled as writers and mourners seek the right ones to express the enormity of this loss, not just to Paris, the French and Catholics, but also to humankind. The destruction of so much history and beauty is overwhelmingly sad.

Of course, Parisians and the French feel the loss most acutely. Notre Dame has always been part of daily life and is, as so many have said, the heart of a city that has survived revolution and wars. But, just as Notre Dame has been a place of transcendence for those who have entered there, its splendor and meaning transcended boundaries of nationality and religion. When the 300-foot oak spire toppled, the audible gasps of nearby onlookers were echoed in offices and homes in London, Moscow and Oklahoma City. Also, in Charleston, South Carolina.

The image of Notre Dame burning took my breath away. And, yes, I was speechless. A series of thoughts raced through my mind, some fairly apocalyptic. It wasn’t just Notre Dame -- “Our Lady” -- that was being destroyed. To my mind, I was witnessing the immolation of Western Civilization. The words that kept repeating themselves as I tried to make sense of what I was seeing were simpler: This is so wrong.

Notre Dame isn't supposed to burn. It is immortal in the hearts and minds of men and women who have lived and died for generations in its shadow. Airplanes aren't supposed to crash into buildings, either. One couldn't help connecting the burning of Notre Dame to the destruction of the World Trade Center Towers. Even though very different, one a monument to money and the other to God, both instances felt wrong in the way of civilization unraveling.

There's no evidence that the fire was anything but accidental -- just one of those things, despite fire monitors that checked the framework under the roof three times daily and an on-site firefighter. But monuments of this kind are few and we cling to them as a connection to historical continuity as we face contemporary calamities. Ah, yes, wars and revolutions come and go, but Notre Dame stands.

This, perhaps, is why we stand aghast. Fire, alternately nature's most ruthless element and also a most-efficient purgator, released its fury upon one of humanity's greatest monuments to the holy trinity -- God the father almighty, maker of heaven and earth; Jesus Christ, his only son; and the Holy Ghost, forever and ever. The layers upon layers of symbolism in the devastation of art, beauty, faith, history and our ultimate vulnerability are almost too much to bear.

Which reminds us that when the twin towers collapsed on Sept. 11, 2001, the man who would become president of the United States 15 years later boasted that one of his buildings had become the tallest in Lower Manhattan.

Kathleen Parker writes a twice-weekly column on politics and culture for the Washington Post. In 2010, she received the Pulitzer Prize for Commentary for “her perceptive, often witty columns on an array of political and moral issues, gracefully sharing the experiences and values that lead her to unpredictable conclusions.”