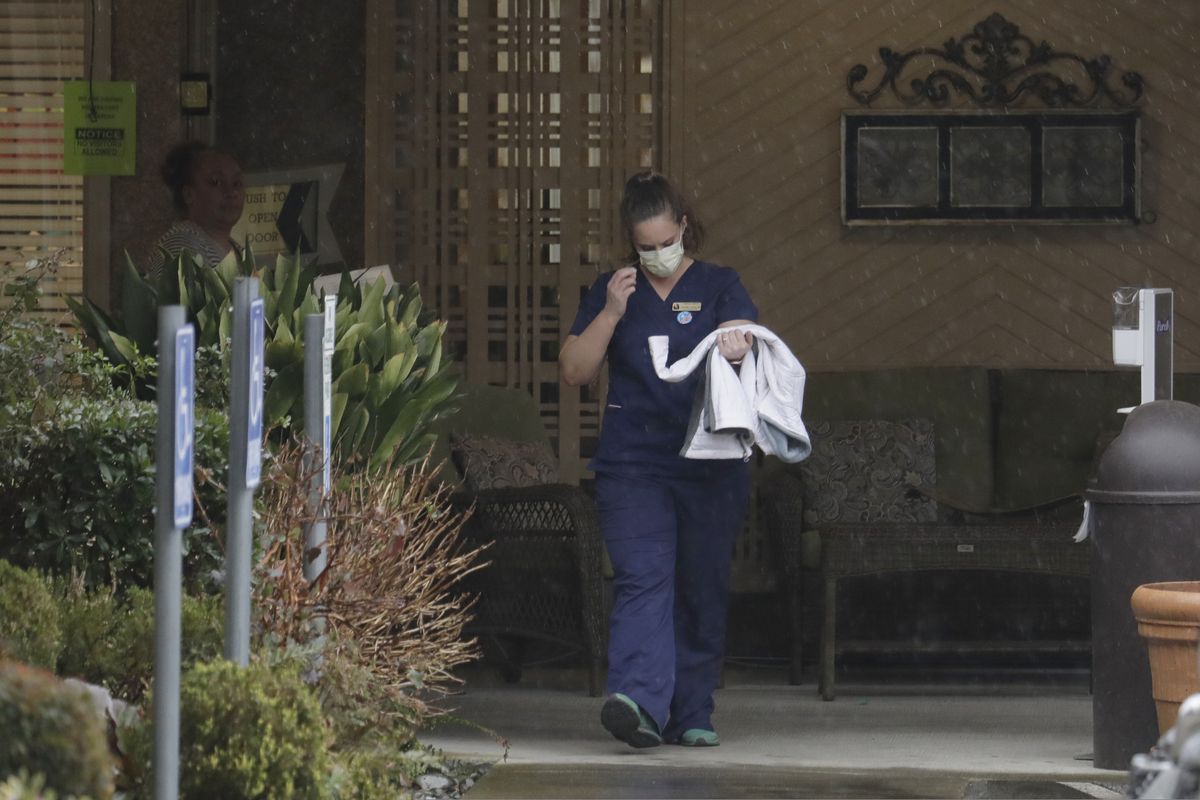 A worker at the Life Care Center in Kirkland, Wash., near Seattle, wears a mask as she leaves the building, Monday, March 2, 2020. Several of the people who have died in Washington state from the COVID-19 coronavirus were tied to the long-term care facility, where dozens of residents were sick. (AP Photo/Ted S. Warren)

A worker at the Life Care Center in Kirkland, Wash., near Seattle, wears a mask as she leaves the building, Monday, March 2, 2020. Several of the people who have died in Washington state from the COVID-19 coronavirus were tied to the long-term care facility, where dozens of residents were sick. (AP Photo/Ted S. Warren)

Just how bad will the new coronavirus be? I can't answer that question, but I have observed the debate splitting into two broad camps: Call them the "growthers" and the "base-raters."

The term “growthers” refers to the notion of exponential growth, and indeed the number of Covid-19 cases appears (by some accounts) to be following an exponential pattern. Some scientists have estimated that the number of cases doubles about every seven days. If you play that logic out, it is easy enough to see how people might be complacent at first, then in a few months there is a public health crisis.

Of course, that process of doubling won't go on forever. At some point, the number of people who have already been exposed to Covid-19 would become so large that their immunity could lower the subsequent rate of spread. Furthermore, society would adjust by having fewer large gatherings — many conferences already are being canceled — and by taking other precautions.

Still, the growthers find it easy to imagine that the number of cases might overwhelm the capacity of the U.S. health care system. Even if you think a speedy American (or more likely Singaporean) response argues against this scenario, it is harder to be equally sanguine about all the world's nations, most of which are much poorer and have lower-quality public health systems than the U.S.

The growther approach seems most common among people trained in mathematics, finance, and those who work in technology. Finance is centered on the idea of exponentially compounding returns, where small initial gains turn into something quite large. So financial professionals understand the growther perspective.

In tech, the major companies have grown from nothing to very large fairly quickly, often by taking advantage of a (positive) network or contagion effect for their products. Tech people are also familiar with Moore's Law, which says that computing power increases exponentially as its cost decreases dramatically. It is no surprise that Bill Gates recently suggested that Covid-19 may be the once-in-a-century pathogen the world has been worried about.

Overall, the growthers tend to be analytical people who work a lot with numbers and are used to modeling the problems they face. The mindset in Washington, by contrast — and indeed much of America — is much closer to the base-raters.

The base-raters, when assessing the likelihood of a particular scenario, start by asking how often it has happened before. That is, they estimate its base-rate likelihood. And history shows that major pandemics have lately been rare. The SARS and Ebola outbreaks largely petered out, HIV-AIDS was of a very different nature, and the 1957 and 1968 flu epidemics are now distant memories.

Base-raters acknowledge the exponential growth curves for the number of Covid-19 cases but still think that the very bad scenarios are not so likely — even if they cannot exactly say why. They view the world as hard to model, and think that parameters do not remain stable for very long. They are less convinced by analytical and mathematical arguments, and more persuaded by what they have seen in their own experience. They tend to be pragmatic and rooted in the moment.

Political scientist Philip Tetlock, in his work on superforecasters, has shown that base-rate thinking is often more reliable than the supposed wisdom of experts. Most of the world, most of the time, does not change very quickly. So there is an advantage to considering broadly common historical probabilities and simply refusing to impose too much structure on a problem.

As for the health-care establishment, epidemiologists understand exponential growth rates very well. But many medical professionals think in terms of what are called "normal" statistical distributions. If someone visits your office with what appears to be a typical flu case, it is usually exactly that. The result is that there is not much surge capacity in America's hospitals and public-health institutions.

I still don't know which of the two perspectives on Covid-19 is the wiser. But as someone who has studied exponential growth rates for economies, I confess that my concerns are rising.

Tyler Cowen is a Bloomberg Opinion columnist. He is a professor of economics at George Mason University and writes for the blog Marginal Revolution. His books include “Big Business: A Love Letter to an American Anti-Hero.” This column does not necessarily reflect the opinion of Bloomberg LP and its owners.