Why the Atlanta killings aren’t just about one thing 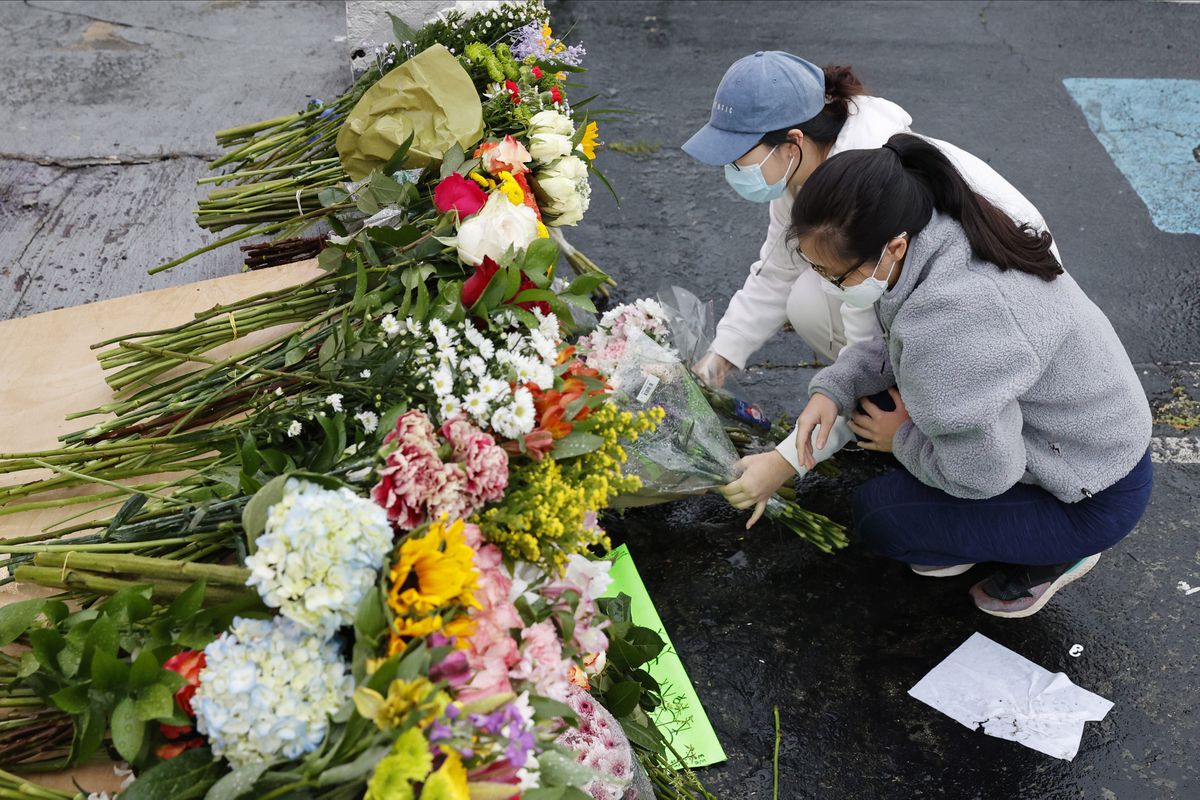 Jenny Choi, left, and Kristi You place flowers at the entrance of Gold Spa, one of three Atlanta-area locations where deadly shootings happened this week. Six of the eight people killed were Asian women. (Photo by Chris Aluka Berry for The Washington Post)

Jenny Choi, left, and Kristi You place flowers at the entrance of Gold Spa, one of three Atlanta-area locations where deadly shootings happened this week. Six of the eight people killed were Asian women. (Photo by Chris Aluka Berry for The Washington Post)

Here is how local law enforcement on Tuesday bafflingly explained its thinking about the Atlanta-area shooting suspect who had confessed to killing eight people, including six Asian women, at three local spas: “He apparently has an issue, what he considers a sex addiction,” a captain from Cherokee County said at a Wednesday news conference. It was too early to tell, officers said, if the incident was a “hate crime.”

Here is what Christine Liwag Dixon, a Filipino American writer and musician, thought about after she heard that clip. She thought about how she was once offered money for a “happy-ending massage,” even though she is not a massage therapist and never has been. She thought about all the men who have told her they’re “into Asian women” and expected her to take it as a compliment. She thought about the time she went outside to call an Uber while her husband paid a restaurant bill and a group of men cornered her, one of them chanting “Me love you long time” while standing so close she could feel his breath on her neck.

She thought about how most Asian American women probably have a similar library of terrifying experiences. “To be hypersexualized,” she said in an interview. “To be treated as an object of sexual desire.”

Of course the shootings were racially motivated, she thought. Of course they were motivated by gender. They were both.

“Imagine - a world in which it could be both,” sighed Sung Yeon Choimorrow, the executive director of the National Asian Pacific American Women’s Forum. “I’m frankly floored by how difficult this is for people to understand.”

Of course the Atlanta shootings represented gender-based violence. Asian Americans of all genders reported an increase in harassment in 2020 - racist responses to coronavirus misinformation, which was amplified by the previous White House. But in new research from Stop AAPI Hate, Asian American women reported harassment incidents 2.3 times as often as male counterparts.

And as for race-based violence: A law enforcement official said the shooter was attempting to remove the “temptation” that “these places” presented him - a victim-blaming notion on its face.

But the shooter’s route between Young’s Asian Massage - where Xiaojie Tan, Daoyou Feng, Delaina Ashley Yaun and Paul Andre Michels were killed - and his second destination took him past several adult businesses.

He could have stopped at strip clubs, pornographic video stores or multiple shops lined with wall-to-wall dildoes. But he didn’t. He drove 27 miles to Gold Spa, where he allegedly killed three Asian women, and then crossed the street to Aromatherapy Spa, where he allegedly killed one more (the names of the victims at the final two establishments have not been released).

“Even the explanation of a sex addiction - that is already racially layered,” said Rachel Kuo, co-founder of the Asian American Feminist Collective. “The ‘temptation’ is tied to the assumption of Asian woman being docile and submissive and at the same time being exoticized,” Kuo said.

“The law and the media demand a singular narrative: Is it this or that?” Kuo said. “When really it’s all of those things. It’s race, gender and class, together.”

Or, as law student Nina Lea Oishi encapsulated it on Twitter: “It’s not ‘sex addiction.’ It’s the entirety of American culture that says it’s OK to treat Asian woman as objects to be disposed of. ... The through-line is an arrow that points straight to killing us.”

But that narrative lets non-Asian Americans ignore their own cultural and historic complicity: decades and centuries of “Miss Saigon,” “90 Day Fiance,” the Page Act of 1875 that sought to prevent immigration by presuming East Asian women would become prostitutes, the havoc wreaked by wars fought in Japan, Vietnam, Korea and the Philippines.

The singular narrative of racism or misogyny also denies Asian women their full personhood. “At the core of it, what it’s doing is trying to minimize us into two-dimensional people,” Choimorrow said. “Either we’re sex workers-slash-women or we’re Asian Americans. And I want the conversation to be about both.”

When Choimorrow immigrated to the United States to attend college several decades ago, she was stunned by the combination of racialized and sexualized attention she received. “Some guy would go on and on about how they loved Korean women and they’d had a Korean girlfriend in the military,” she remembered. “It is astounding to me that our society is willing to accept this very dangerous sexualization. By trying to minimize the story, you’re minimizing what has happened to us. But it feels so personal to us.”

It was this feeling of personal connection that prompted Liwag Dixon, the writer, to not only reflect on her own life experiences but to share them on Twitter, where hundreds of Asian American women joined in.

“These were women,” Liwag Dixon said. “With friends, with families, and jobs, and hopes, and traumas and goals. And then their lives get summed up as ‘several of the victims were women of Asian descent.’ "