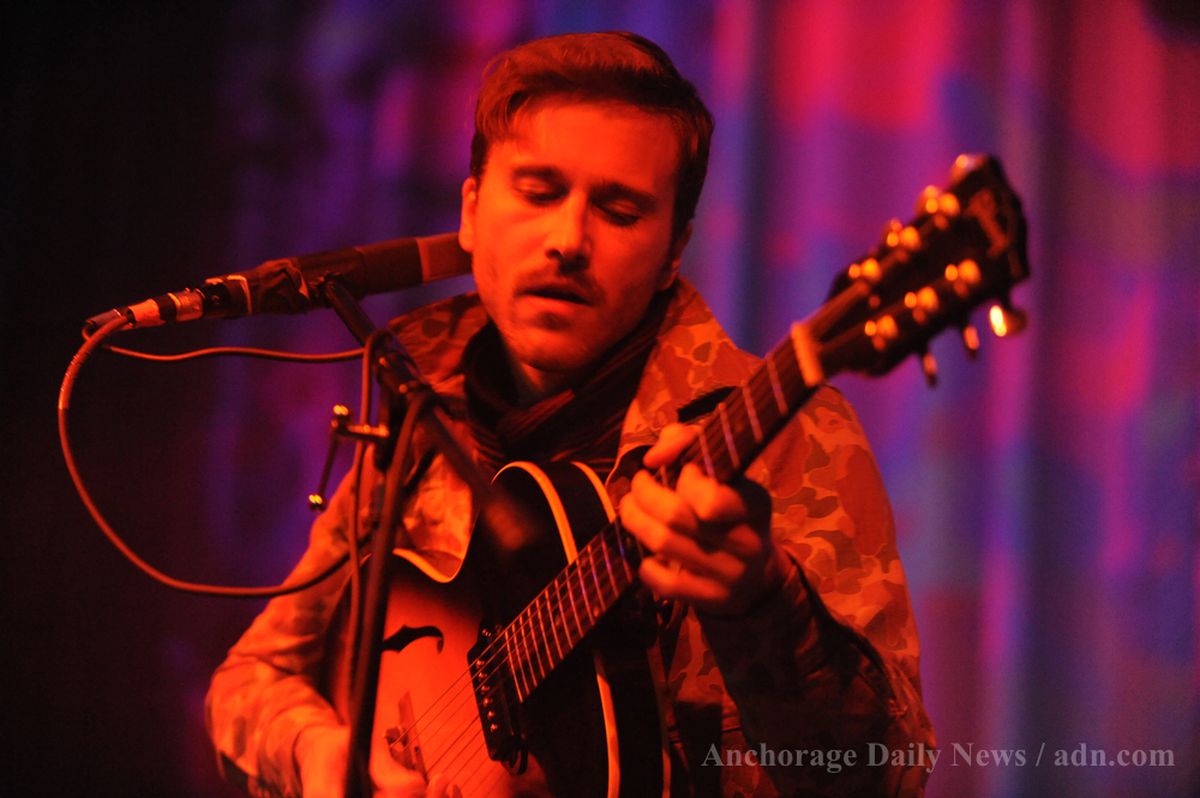 Marc Lester / Anchorage Daily News Portugal. The Man performed a sold-out show at the Bear Tooth Theatrepub on Thursday, December 21, 2012. The band is based in Portland. Two members, Zachary Carothers and John Gourley, are from Wasilla.

Marc Lester / Anchorage Daily News Portugal. The Man performed a sold-out show at the Bear Tooth Theatrepub on Thursday, December 21, 2012. The band is based in Portland. Two members, Zachary Carothers and John Gourley, are from Wasilla.

WASILLA -- John Gourley, 30, is standing in the lobby of Wasilla High School. Back for the first time since he dropped out.Wrestling practice has ended and boys with backpacks linger outside the gym, staring at the thin, delicately handsome singer-guitarist of the rock band Portugal. The Man and the video camera trailing his tour of the school. If the students walking to the parking lot full of snowy pickups recognize the man in the scarf and newsboy cap, they make no sign of it.

"This is where Zach's cover band used to play," Gourley said of his bandmate, bassist Zach Carothers. "They would cover Cannibal Corpse and Slayer. Rage Against the Machine.

Yes, they could. Gourley, Carothers and three other Mat-Su musicians released an album as Anatomy of a Ghost in 2003, splitting the next year to launch Portugal with a new, Portland, Ore.-based lineup. By 2011, signed to Atlantic Records, the group had become darlings of college radio with their "In the Mountain in the Cloud" landing on many critics' best-of-the-year lists.

MTV ranked the record No. 9, just ahead of Lady Gaga's "Born This Way" and just behind Jay-Z and Kanye West's "Watch the Throne." Others praised the album -- the title is a nod, according to Gourley, to the many peaks of Alaska -- for bridging the band's precarious jump to a major record label with a cohesive batch of lush, retro-minded rock.

Maybe you've never heard of Portugal. While they play alongside the big names at the big festivals -- Coachella in California,Lollapalooza in Chicago, Bonnaroo in Tennessee -- there has been no blockbuster record, no hit single. "In the Mountain" peaked at No. 42 on the Billboard 200.

But for fans of a certain flavor of Beatles and David Bowie-influenced indie-rock, these Alaska exports are rebranding what it means to be from Wasilla.

While the band members live in Portland, touring much of the year, they returned to Alaska inDecember for two performances and a holiday break before hitting the road again in January. (After shows in New York last week, they're touring in Europe, opening a string of shows for the Black Keys.) Such homecomings have become a ritual for Gourley, vacations of music-writing and hibernation.

This trip, however, took him to a corner of the state he's never seen before and, growing up in the Valley, he said, never quite understood.

"Who?" Gourley asked, when I mentioned Sarah Palin during a quiet morning at his parent's home in Willow.

Gourley clicked off a TV tuned to the Iowa caucuses, his plaid shirt revealing a sleeve of tattoos.

The Gourley family home stands hidden at the end of a snowy driveway along the Parks Highway. Sled dog racing bibs decorate the garage.

Inside, rifles are collected in an antique milk jug like so many umbrellas. A 1989 sportsmanship award from the Kobuk 440, a late-season race that winds through Northwest Alaska villages, sits above the fireplace.

Gourley's parents, John and Jennifer, are both Iditarod veterans, with John finishing as high as 18th place.

"I was in Unalakleet, still, when (Susan Butcher) won," Jennifer said.

The pair are originally from Morrisville, N.Y., but met by accident after arriving separately in Alaska in the 1970s. The elder Gourley owned a contracting business and supervised the construction of Princess hotels across the state as the family moved from town to town. Healy. Cooper Landing. Fairbanks. Gourley's dad and brother still build houses.

For much of his childhood, Gourley lived along Knik-Goose Bay Road near the home of Iditarod founder Joe Redington, and mementos of the race dot his parents' home.

Gourley sipped a mug of black coffee as girlfriend Zoe Manville watched their baby, Frances. The little girl chattered on a blanket as Gourley's mom, a captain for the Willow Fire Department, talked on the phone. This was his first trip home, Gourley said, during which his brother didn't wake him at five in the morning to go build houses.

"(My dad) was still mushing dogs when I was in high school," Gourley said. "That would be after '96. He'd show up in his parka. His dog mushing stuff. All his gear on and dog truck parked just right out in front of the school."

Portugal spends much of the year on the road. The band performed about 175 shows in 2011 and roughly 250 the year before, Gourley said.

The most recent tour ended in Alaska. A Dec. 14 performance outside Fairbanks at the Blue Loon was likely the smallest show Portugal has played in two years, Gourley said, followed two days later by a performance at the Egan Center in downtown Anchorage.

Gourley's parents watched the Egan show from the sidelines. The band's live show transforms the polished and pretty songs of Portugal's recent albums to muscle-bound, chest-rattling anthems. And the Anchorage show had the added element of a homecoming, with repeated shout-outs from Gourley and Carothers to friends, family, Alaskans, Alaska.

"I probably went to high school with a third of you," Carothers told the crowd.

He saw his first concert, a Primus show, on the very same stage 17 years before, the bassist later said in an interview.

"We really wanted to make it known that we love Alaska. And we care about Alaska," said Carothers, who haunts the Mug-Shot Saloon and Mat-Su Resort when he comes back to the Valley.

After the concerts, Carothers returned to Oregon to spend Christmas with family. Gourley went to Willow with Manville and Frances.

Then, in late December, Gourley made a surprise detour to Bush Alaska.

"It feels like getting into our own backyard is harder than getting to anywhere else," said Gourley, who flew to the Northwest Alaska village of Shishmaref with photographer Nikolas Zografos.

Dennis Davis, a former village police officer who has been looking for ways to draw more attention to conditions in rural Alaska, hosted the visit.

"I'm still kind of freaked out how he's taken the time, all this effort, to come out and do something like this," Davis said.

(Disclosure: Davis and Gourley connected when I asked the singer if I could pass his email along to Davis, whom I'd been talking with about damage caused by recent Bering Sea storms.)

A coastal village of about 560 people, Shishmaref is best known as one of several Alaska communities threatened by coastal erosion as permafrost thaws along the village shore. It was also the home of Iditarod legend Herbie Nayokpuk, known as the "Shishmaref Cannonball," and Gourley's Iditarod pedigree smoothed the path for a visit to Nayokpuk's family.

In Shishmaref, "nobody really knows who Portugal. The Man is," Davis said. "But they know who John's dad is, John, and his mom, because it's a mushing community."

Nayokpuk's kennel provided one of his father's first lead dogs, said Gourley, who filmed interviews with Nayokpuk's nephew as well as a village artist and a counselor. "I wanted to hear stories about him because I knew it was someone my dad always respected."

Gourley is considering follow-up visits to rural Alaska later this year and said he's trying to raise money for a video project that would document life in villages.

If Gourley's fondest memories of Wasilla High are Carothers' lunchtime concerts, one of the worst was the day he decided to leave school and study at home.

It was the end of the school year and he had finished a geometry final without showing any of his calculations and a teacher accused him of cheating, he recalled. Achingly shy, Gourley had struggled to explain.

That's just how his mind works, he wanted to say.

"I'm trying to find the words, and I didn't really know how to tell him, 'This is really hard for me to talk to you about,' " Gourley said. He stayed after school to take the test again.

Gourley says he still suffers from sometimes-paralyzing social anxiety. Simultaneously shy and confessional, he tweeted several times about experiencing panic attacks during the most recent tour.

The singer is like no one else he's ever met, Carothers said.

"He's got a very abstract way of thinking. That is pretty obvious when somebody sits down and reads lyrics. When you know the guy, it's actually incredibly simple," he said.

On the day he revisited his old high school, Gourley spent nearly an hour at a local strip mall, talking to a financial advisor. The topic was music, not money.

Gourley had agreed to meet the man's son, 17-year-old Wasilla High student Jordan Smith. The boy plays guitar too, his father said, and recently performed a Portugal. The Man song called "So American" for his final exam in a guitar class at the school.

WHAT'S WITH THAT NAME?

Trying to figure out Portugal. The Man's awkwardly punctuated name?

"The name is an alter ego ... We all love David Bowie and James Brown and Elvis. Things like that. And we wanted to create this alter ego much like Ziggy Stardust or Sgt. Pepper. And in doing that, we wanted to find something that was representative of our band, and our group. And I think ... We just were talking about it at the time, we just said, 'A country is an individual within the world that is a group of people, with it's own voice.' And I think it just came down to Portugal being the guy's name.

The period is there so you know that, that's the name. And 'The Man,' just lets you know, he'sthe man. Keeps it cool."