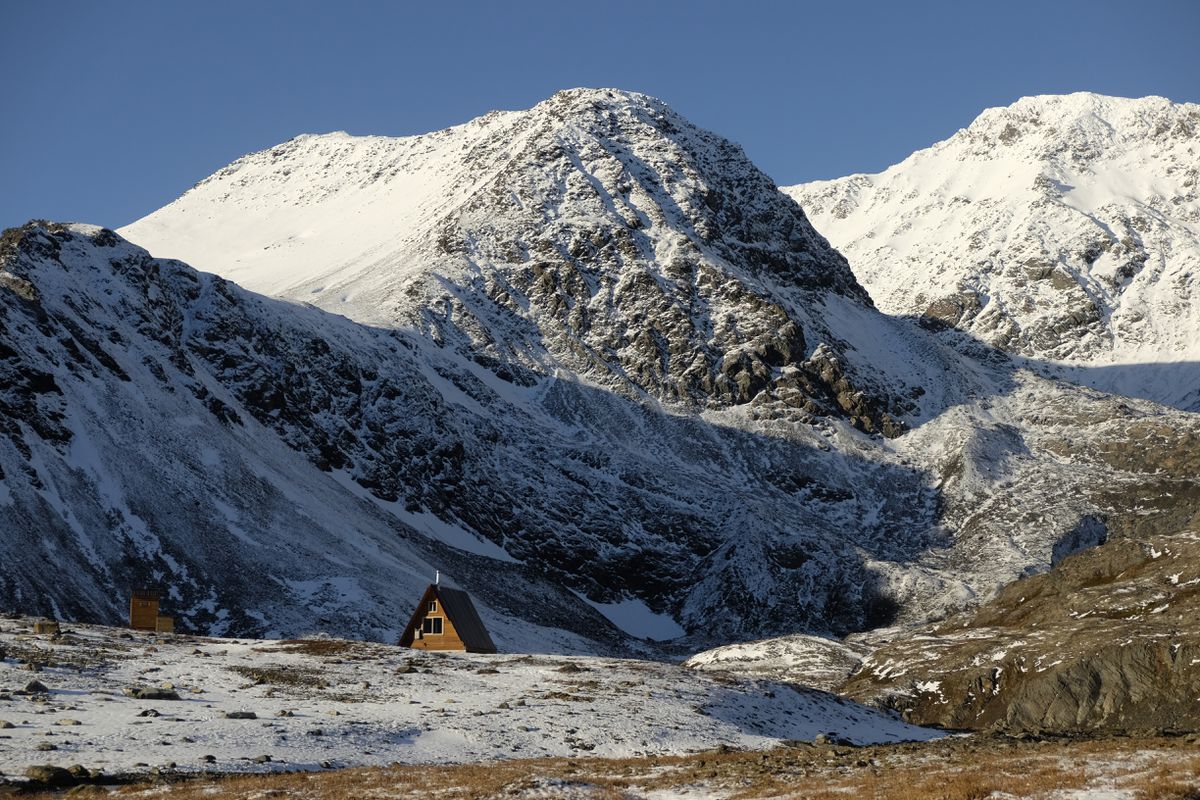 It's thrilling to actually have winter in Southcentral again, but don't get so caught up playing in the snow that you miss the chance to reserve one of Alaska's spectacular public-use cabins for a summer outing. Now is the time to think about booking them if you want to get away during the long summer days of June, July and August.

With that in mind, I spoke with officials in Southcentral's Chugach National Forest and Alaska State Parks districts about which cabins always book up first, which underutilized gems they wish more people would take advantage of, and a few shoulder season escapes that you still might be able to snag for the spring.

The state park closest to Anchorage isn't exactly spilling over with public use cabins, but officials are working to keep up with demand. Kurt Hensel, chief ranger for Chugach State Park, says the park has added three new cabins in the last three years — two in the Bird Creek campground at mile 101.2 of the Seward Highway and one off Eklutna Lake — with two more Eklutna-area cabins in the planning and construction stages.

The third new cabin, Kokanee ($60, wood heat, sleeps eight) is set back in the trees on the southwest shore of Eklutna Lake, accessible only by a 4-mile paddle in the summer or crossing the frozen lake in the winter. This is a classic example of an Alaska outing where, even though it's close to a popular, crowded area, you're still largely at the mercy of the weather and your own good judgment: The often-choppy waters of Eklutna Lake can be too much for inexperienced paddlers, and broken or thin ice can make it dangerous to cross the frozen lake in late fall or spring.

Cabins to the north of Anchorage also book up quickly, especially when they're close to roads. Some of the most popular cabins sport the easiest access: the Bald Lake cabin in Nancy Lake State Recreation Area ($70, wood heat, sleeps six) and the three Byers Lake cabins in Denali State Park ($70, wood heat, each cabin sleeps six).

Finally, there are three new public-use cabins in the K'esugi Ken campground (mile 135.4 Parks Hwy), which itself is new. The cabins won't be available until the campground's grand opening in May 2017, but you can reserve them online now. The Hunter and Tokosha cabins each sleep up to eight, use wood heat, offer full handicapped access and cost $75/night. The larger Denali cabin sleeps 10 and will rent for $100/night, but only in winter months. During the summer, it'll serve as the residence for the summer campground host. All of the K'esugi Ken cabins — and most of the campsites — will boast amazing views of the Alaska Range, weather permitting.

Moving south, Jack Blackwell, superintendent of the Kenai and Prince William Sound region of Alaska State Parks, says that the most popular cabins in his region are near road-accessible communities like Seward, Homer, Whittier and Valdez. In fact, demand for cabins across Kachemak Bay is so high that Alaska State Parks partnered with a private business, Alaskan Yurt Rentals, to build and rent yurts in that region.

On Resurrection Bay near Seward, the Derby Cove and Callisto Canyon cabins — both a short walk from the Caines Head State Recreation Area — are very popular during the summer but fairly easy to reserve during the shoulder season. Each cabin rents for $70, uses wood heat, sleeps up to eight, and is accessed by water taxi (summer only) or a 5-mile beach walk that is completely covered during high tides. Read the state parks website carefully for information about timing your walk with the tides. The boat-access-only Spruce and Porcupine cabins in Thumb Cove ($70, wood heat, each sleeps up to eight), just across the bay, will get you away from the summer crowds that haunt Caines Head.

For a true underutilized gem in this area, visit one of Superintendent Blackwell's favorite places: The beautiful fly-in Midtimber cabin ($70, kerosene heat, sleeps eight) near Cape Yakataga on the northern shore of the wild, stormy Gulf of Alaska. Blackwell says this is some of the nicest country he's seen — high praise coming from someone who's spent most of his working life sampling the prettiest places Alaska has to offer.

You'll have the place to yourself, as the other cabin nearby — the Vitus cabin — is closed indefinitely until the maintenance budget allows for repairs to the foundation.

Unsurprisingly, the Crow Pass cabin ($65, kerosene heat, sleeps six; summer access only due to avalanche hazard) — three miles from the Girdwood trailhead, where the popular 23-mile Crow Pass Trail begins — is by far the most popular cabin in Chugach National Forest's Glacier Ranger District. If you want to sleep here you'll need to be poised at your computer right at 6 a.m. when reservations open, six months before your planned visit.

You'll find similar competition for the new Spencer Bench cabin ($85, kerosene heat, sleeps up to eight; book through alaskarailroad.com during the summer and recreation.gov for the winter). Summer access is by train to the Spencer Glacier whistle stop. Winter access is by snowmachine up the Placer River drainage; check the Chugach National Forest Avalanche Information Center website (cnfaic.org) for updates about motorized use openings, which depend on snow cover.

Graham Predeger, recreation operations supervisor for the Glacier Ranger District of Chugach National Forest, pointed out that all the cabins in western Prince William Sound are popular, too, and visitors often forget that in addition to water taxis, you can also hire a small plane to take you out. One of Predeger's favorites, and perhaps the least utilized cabin in the Glacier Ranger District, is Paulson Bay ($65, propane heat, sleeps six), just a 45-minute boat ride out of Whittier. It's an excellent base camp for fishing, shrimping, sea kayaking, or backcountry skiing during March and April, when the days are longer and the snowpack has stabilized.

If you're serious about fishing, you may already be familiar with some of the top cabins in the Seward Ranger District of Chugach National Forest. The Barber Cabin ($65, wood heat, sleeps up to eight) is more than three miles in on the mostly gravel Lower Russian Lakes trail, but that didn't keep it from being booked 288 nights last year, according to Chugach National Forest recreation staff officer Jesse Labenski.

The cabins along the 39-mile Resurrection Pass trail are also enormously popular, especially toward the south end near Cooper Landing; and the Dale Clemens cabin ($65, propane heat, sleeps up to eight), three miles in on the winter trail from the Lost Lake trailhead near Seward, was rented almost 300 days last year.

Perhaps the most underappreciated cabins in this region, Labenski said, are the Upper and Lower Paradise Lake cabins ($60, wood heat, each sleeps up to eight), which offer great grayling fishing and stunning scenery, accessible only by small plane.

And there's much more south of Anchorage. The Kenai National Wildlife Refuge also offers 16 cabins, all available at recreation.gov.

Basics for any cabin

No matter which cabin you use, there are a few things you should always do. First and foremost is making a reservation: If you try to squat in an empty cabin you can be fined by rangers and, because this is Alaska, you also the risk of annoying someone who is quite literally loaded for bear. So play nice and follow the rules.

Next, check the cabin's online info sheet to find out whether there is a nearby fresh water source you can treat/filter, or if you'll have to pack in all your water. Also, check what sort of fuel the cabin's heater uses.

Park officials try to make sure helpful gear — sometimes an ax or maul for splitting firewood — is available at cabins, but they don't provide fuel, and occasional theft means you should plan to be completely self-sufficient in terms of gear, too.

Finally, make sure you always have a light source for the cabin, whether it's a lantern, headlamp or button-style LED light. Most cabins will get some sort of usable light during the summer, but that light source still comes in handy during shoulder seasons or if the cabin is set back in the trees.

Got a favorite?  Let us know in the comment section.

Anchorage freelance writer Lisa Maloney can be reached at lisa@maloneywrites.com.