Frozen Portage Lake seems to be getting more visitors. Is it safe? 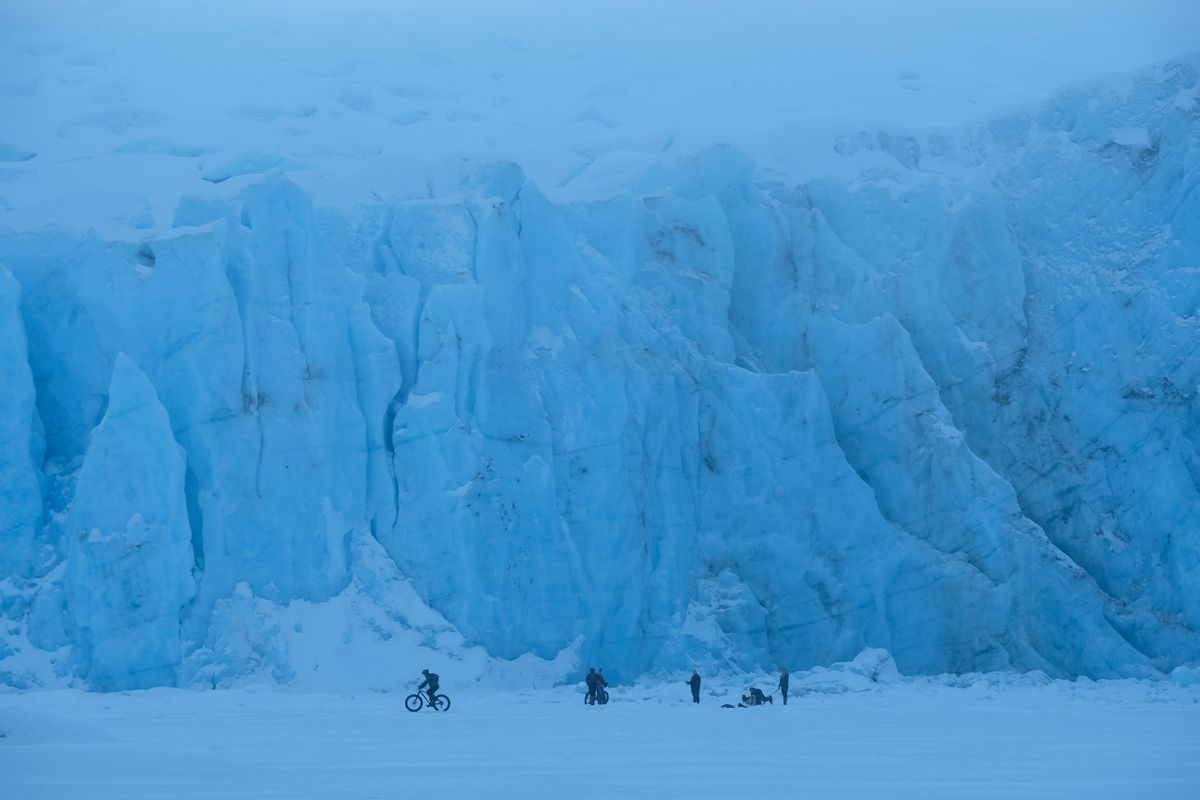 It was a clear, cold Sunday afternoon when Jenny Jones and her boyfriend decided to hike out on frozen Portage Lake to the glacier. It was not their first visit, and they were not alone.

The parking lot was full, even though the temperature had dipped into single digits. Jones thinks there were 80 to 100 people on the lake. Jones, 32, and her boyfriend, Nathan Frerichs, went there the weekend before — also when it was cold and clear — and built a bonfire near the face of Portage Glacier.

The pictures were stunning and other friends wanted to go, so they decided to make another trip.

But on Jan. 7, things were different. As the couple approached the glacier, a massive piece of ice — about 100 feet wide by 100 feet long — calved into the lake, shooting out big chunks of lake ice and water. Jones estimates the event lasted about 10 seconds.

For a moment, she thought it was beautiful. Then she heard a loud crack and watched the ice begin to splinter all around her.

The couple stayed still as cracks several inches wide opened up around them, spitting water onto the ice. People closer to the glacier began to run. An underwater wave pushed up the ice and dislodged parts of it from shore.

"It was insane," she said in an interview Wednesday afternoon.

The lake in winter has long been popular with skaters, skiers and fat-tire bikers, but according to some people who recreate there, it seems to be getting more activity this winter. With sustained cold weather, it's been consistently frozen for the first time in years.

Only a one-hour drive south of Anchorage, Portage is one of the most accessible glaciers in the area.

Chugach National Forest Public Affairs Officer Alicia King said the U.S. Forest Service does not monitor the lake in winter and there's no data on whether use is up. Rangers don't regularly patrol the lake.

"There's no lifeguard," she said.

Both the glacier and the lake are on public land and there's no restriction on access. But the lake has a complex dynamic, influenced by both the thickness of the ice and the unpredictable glacier.

Glaciers move, even in the winter, according to Shad O'Neel, glaciologist for the U.S. Geological Survey in Anchorage. While lake ice can create some stability at the base of a glacier, it won't stop it from calving.

"Calving is thought to be random," he wrote in an email last month. "We think of calving a bit like earthquakes, where we can say which glaciers are susceptible to large events, but a predictive capacity of when or how large the next event will be is impossible."

King said people should be cautious and aware that Portage Glacier can calve at any time. If a chunk of ice is large enough, it can cause a ripple effect on the lake ice.

King said she's received no reports of people falling through the ice this year.

But the lake can be dangerous, even in the summertime. Year-round water temperatures in the lake, which has an average depth of 600 feet, hover between 34 and 36 degrees. In fall 2012, a man died when he tried to retrieve a canoe that had floated away.

In 1964, a group of scientists were on Portage Lake ice during the Good Friday earthquake. The 9.2-magnitude quake caused ice on the lake to ripple and crack, and avalanches crashed down in the surrounding mountains. Despite the fragmented ice, the group made it to shore safely.

[Prominent Alaska geologist dies at 97; was at work on Portage Lake ice during 1964 earthquake]

Girdwood Volunteer Fire Chief Will Day said the department, which would respond to a water rescue at the lake, has no record of having to rescue anyone in the winter since at least 2000, which is as far back the department's records go.

He said the fire department does respond to incidents at the lake but they are usually minor, like car accidents on the road leading to the visitor center or to check on people who report falling on the ice and hurting themselves.

Day said he was at the lake a few weeks ago. He found the parking lot full, with approximately 40 to 60 people on the ice.

He uses it himself and said the lake can be safe if you're prepared for weather and possible rescue if you fall through the ice.

"It's like most outdoor activities in Alaska: There's always an inherent risk there," he said. "And if you're smart about it and mitigate the risk the best you can, it can be a fun and safe activity."

On that frightening Sunday afternoon, Jones said, she and Frerichs were about 300 feet from the glacier when it calved. Frerichs knew that in the cold, the cracks would freeze quickly, and the two decided to stay on stable ice.

After a few minutes, they carefully made their way to land, navigating choppy ice that had dislodged nearshore.

Jones said they took the firewood they hauled out and started another bonfire onshore before hiking back to the parking lot.

Jones said she would still go back on the frozen lake. She'll just keep her distance from the face of the glacier.

"I do feel lucky," she said. "Had our winter had more freeze-thaws, like the last few winters, it could have been a different story for 80 different people."