On an Alaska adventure, a good dog can make all the difference 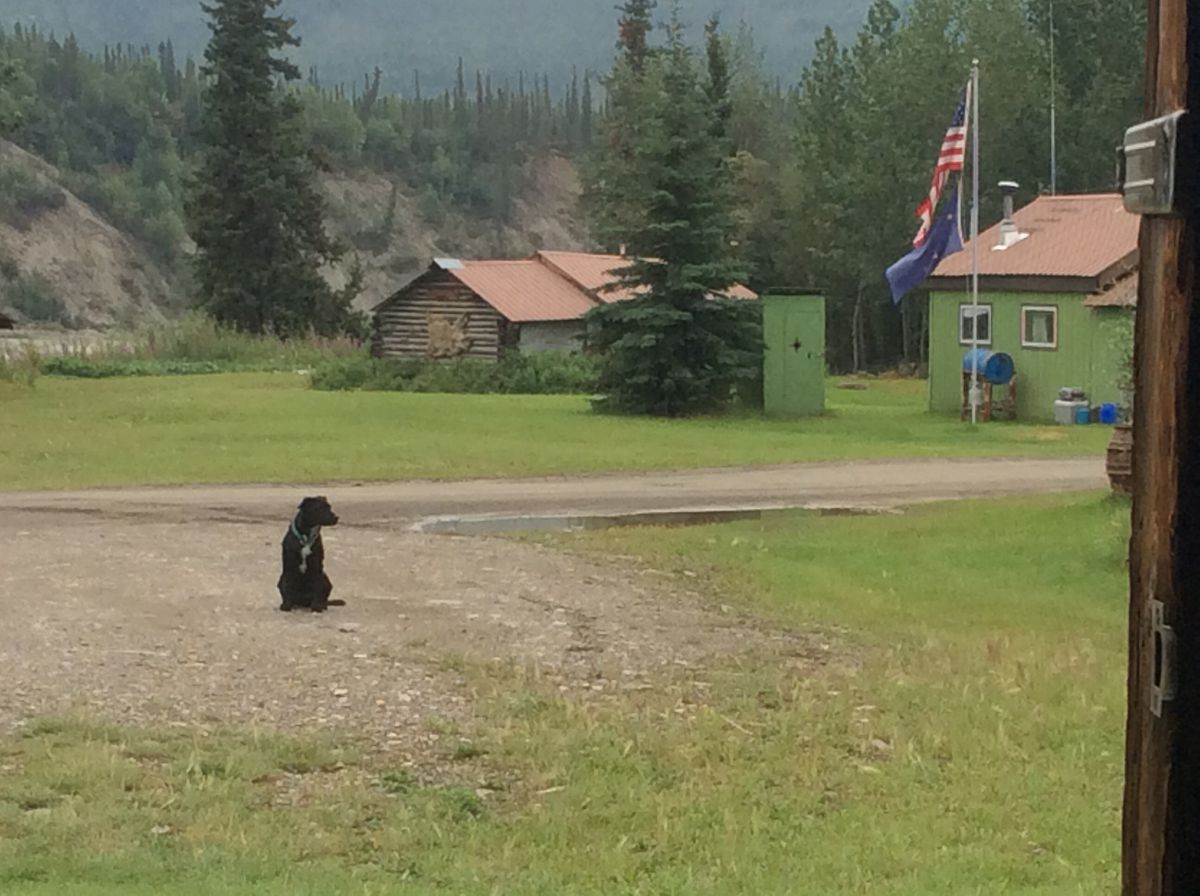 Cora, a Lab-blue heeler mix, walking the path of the trans-Alaska pipeline with Ned Rozell this summer. (Ned Rozell)

Cora, a Lab-blue heeler mix, walking the path of the trans-Alaska pipeline with Ned Rozell this summer. (Ned Rozell)

I suspected my brief dogless period was coming to an end when my wife and daughter began looking at puppies on the internet.

We had a few months earlier lost Poops, a Labrador retriever mix, to a tumor on a front paw. Though it was strange not to have a creature greeting you with socks in its mouth, I was enjoying the break from responsibility.

But Kristen and Anna found a crop of puppies being given away to a good home. One day we surprised Anna by taking her to the home of John Eichelberger. There was a floor full of wriggling black bodies. Some of them were hovering over the pee pads at the right moment.

Anna chose the smallest dog and identified her by tying blue yarn around her collar. Cora first showed us her big voice as John carried her from her siblings and handed her to Anna in the car.

I wasn't sure what I thought about the puppy. Her nose was stubby, like a boxer's, even though she was the product of a Lab mom and a neighborhood blue heeler who was there when opportunity called.

And she remained the runt, not topping 40 pounds even after a year of growth. Plus, she was remarkably loud, especially when she saw another dog through the window or heard a knock on the door. She has cost us a few measures in our range of hearing with that piercing bark.

But those traits are nice in some situations. And she is small enough to sleep with Anna without crowding her. I found her to be a great canoe dog — her weight shifts on the boat are easy to compensate for. She clings to the gunnels like a housefly, even when I try to instill a lesson by rocking her off.

I have had a good number of human partners on this summer's walk along the path of the trans-Alaska pipeline. But only Cora has been there for every step. I can't imagine the trip without her.

She is now pressing against my lower back as I type while sitting next to a mountain stream. She prefers to be on your lap. Some nights, when it's chilly, she will wake me up. I open the sleeping bag flap and she crawls in, somehow turning around at my feet.

That is not the protective position in which I prefer her. I like to turn off my radar and depend on her nose and ears to alert me to gravel scuffs outside the tent. But sometimes she's in the bag, or just too tired from a day of chasing hares and squirrels.

And that's what she gets out of the deal. Total freedom, every day, except when we're close to trucks or groups of people, or we have to walk the highway. Then, she gets on the leash.

But she's a leader who will pull Anna skijoring, so she keeps the line tight as we walk down the road. We cover those miles fast.

And she minds. When I see a bull moose ahead and she does too, she comes toward me when I give her that command. Some dogs, like one that joined us early in the trip, cannot resist the call, and sprint after caribou or bring angry mama moose back to the people. Cora seems to know these big creatures are not to mess with.

We have not seen a porcupine in a few hundred miles. But the last one she saw, she barked at but did not chase. She got pets and a "good girl" after that one. Good decision you made.

Cora has short hair and loves the water. This keeps her clean and cool on the hot days. She suffers in the bugs, but when it's real bad I'll squirt Deet on the back of my hand and apply it to the bridge of her nose. She takes it with stoicism.

She has been dinged up a few times: a red chest from a maladjusted pack and a thorn in her foot pad. I carried her pack in my hand for a few weeks as she healed from the first. I pulled the thorn with tweezers.

She is just 3, at the peak of life. I see an energy contrast between she and Jane, the chocolate Lab who accompanied me on this trip 20 years ago. Jane was 10 then. Cora recovers faster, it seems, never shying from the dog pack and mauling sticks when it's time to go.

Since this 800-mile summer was not her choice, I've been prepared to let her take a break and let her go back to Fairbanks for a summer of playing with her best friend, the neighbor dog. But so far she seems to be enjoying the untethered life, chasing hares and red squirrels all day. And I would not want to go on without her.

Since the late 1970s, the University of Alaska Fairbanks' Geophysical Institute has provided this column free in cooperation with the UAF research community. Ned Rozell is a science writer for the Geophysical Institute. This summer, he is hiking the path of the trans-Alaska pipeline from Valdez to Prudhoe Bay, a trip he first took 20 years ago. You can follow along here.