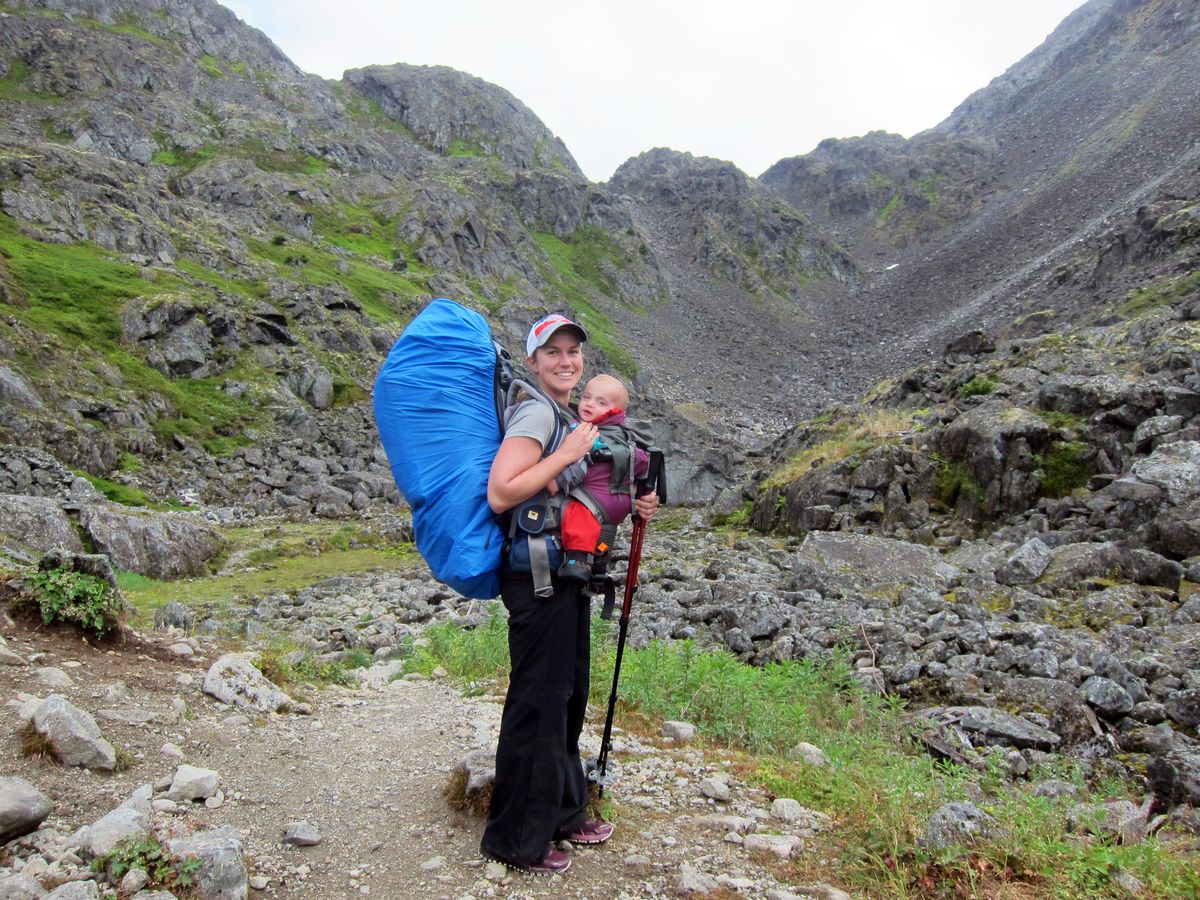 Heather Helzer and her son, Finch, 10 months, pause for a photo along the Chilkoot Trail in mid-August. (Courtesy Heather Helzer)

Heather Helzer and her son, Finch, 10 months, pause for a photo along the Chilkoot Trail in mid-August. (Courtesy Heather Helzer)

Helzer, 31, and her son Finch, 10 months, hiked the Chilkoot Trail last month for no particular reason other than Helzer loves backpacking and her husband, Lee, had already committed to another trip.

"I've always wanted to hike this trail," she said as we sat in a local coffee shop. Finch, in his car seat, was at our feet. "Lee had a climb scheduled, so I put out on Facebook that I was interested in the Chilkoot, hoping that other friends with babies would want to go, too."

The Chilkoot Trail stretches from Dyea near Skagway up and over steep, rocky Chilkoot Pass on the way to Lake Bennett, British Columbia. Managed by the National Park Service on the U.S. side, and Parks Canada (the agency issuing permits) on the Canadian side, only 50 people per day are allowed to be overnighting at one of the nine campgrounds available to backpackers. It's incredibly popular for a boots-on-the-ground look at the trials of miners and entrepreneurs looking to strike it rich during the 1890s Gold Rush years, so if Helzer was serious about going, she told herself, she'd better get her permit, which she did, calling the Parks Canada 800-number on Jan. 1, 2017.

When it turned out no friends were unable to accompany her for the dates she'd chosen, Helzer decided to go anyway.

"I was sure I'd be able to find other people hiking at the same time," she reflected, "And 50 people on a 33-mile trail sounded like a lot."

So she started preparing herself and her small son for what she hoped would be a trip to remember.

Heather Helzer is like many of us who want our children to grow up with opportunities to explore the outdoors, even if they themselves did not. Helzer was lucky; her parents subscribed to this philosophy, so she and her family camped a lot during her growing up years, albeit in a shell camper.

"It was part of our family's lifestyle," she told me, "But I didn't start backpacking until my freshman year of college when a physical education course required us to do one thing outside our comfort zone. So I went backpacking."

This college challenge translated into Helzer young adult years, spending countless nights in tents before meeting Lee and embarking on perhaps the greatest adventure of all — parenthood.

And Helzer's journey is not all that unusual, thanks to a growing worldwide trend of raising nature-loving children. Here in Alaska it's easier than ever before to find playgroups, hiking clubs, and outdoor preschools that focus on nurturing little ones to the value of outside spaces from day one. In Anchorage alone, there are several groups that meet on a rolling basis, babies on backs or fronts and siblings in tow, to do everything from walk around University Lake or hike Wolverine Peak from Glen Alps. Local mother Jennifer Aist, author of "Babes in the Woods," has taught a class by the same name at Providence Alaska Medical Center for years. The resources, once slim, are now plentiful.

But backpacking is a different sort of outdoor exploring. While parents may be adept, even skillful, at navigating day hikes with a baby, the concept of continuous hiking while carrying everything one needs for an infant and the parent is sometimes too overwhelming to think about.

I put out a question to parents belonging to an Anchorage chapter of Hike It Baby, an organization based out of Portland, Oregon, that encourages parents to begin outdoor walks and hikes almost from day one. What I wanted to know was the tipping point, the barriers that prevented them from giving backpacking with a baby a fair shot. Responses were immediate and similar.

"The biggest challenge is knowing how to carry all the weight of the gear and my 22-pound baby and still enjoy the hike," said Sara Dykstra, mother to 17-month-old Ben, who hiked to the Spencer Bench Cabin in Chugach National Forest this summer. "I'm not a super athlete, and it was really hard to know how to fit everything in the backpack."

Dykstra and her little one hike regularly, but hiking up a steep trail like Spencer Bench made it clear that backpacking is a different sort of adventuring.

In full disclosure, Helzer is an athlete, so she didn't need to change her personal lifestyle that much to physically prepare for a marathon hike in Alaska's wilderness. What she did need to do, however, was figure out a way to carry both her son and gear without overpacking or straining her own physical limits.

A planner by nature, Helzer calculated carefully for weeks before hitting the trail. Everything from diapers (she took 10 disposables and crossed her fingers, and packed them all out) to clothing for Finch and her was evaluated and then chosen or discarded. Heather is nursing her baby, so fortunately there was no need to carry formula or extra water, but with Finch nibbling on solids, she did need to find backpacking meals that appealed to both of them.

Gear-wise, Helzer packed an ultralight backpacking tent, one sleeping bag and a pad for herself, adding a down quilt and packable camp chair that doubled as a pad for Finch. Both wore lightweight, non-cotton layers, and Finch spent most of the trip in his sleepers with a baby rain suit over the top. Helzer added puffy coats when the temperature dropped, but all in all, she said, "I think I did it right."

In the end, Helzer said, she figures the backpack weighed about 50 pounds. Finch weighs 20. She bought a new pack that fit her body type and allowed for comfort with the cross straps of her front carrier.

"Definitely find a pack that fits you and your carrier," she said, noting that she took both Finch and the carrier with her when she shopped.

Another crucial element of preparing for a multiday hike, Helzer emphasized, was practicing. A lot.

"We camped every weekend for the six weeks prior to the Chilkoot," she said, noting that it allowed her to work out the bugs and get her back and shoulders ready for the 70 pounds of packing.

Finch Helzer is by nature a pretty easygoing kid, and while his mom and I talked for hours at a coffee shop he alternated between smiling at every passing grownup and chattering for more snacks. Not every baby is like this, and Helzer freely admits she chose the pre-walking age to tackle Chilkoot Trail because she knows once Finch tastes his freedom, the ease of carrying a placid baby might be over.

Helzer took frequent breaks during her hike, pulling Finch out of the carrier and letting him crawl around the warming huts scattered throughout the Chilkoot Trail. She didn't bring any toys along because the naturally-occurring toys were more fun.

"He'd find pinecones and sticks, or nurse for a while then crawl around; it was really nice to just let him explore his surroundings," she said.

The breaks also allowed Helzer to rehydrate herself, load up with calories, and relax. It also allowed her time to become acquainted with "trail friends" she met along the way.

While she originally thought there would be lines of hikers strung out between campgrounds, Helzer says, it didn't turn out like that in the beginning. She ended up hiking most of the first day completely alone, which unnerved her and made her question the whole solo idea.

"Oh, man, there were huge bear tracks in the mud, and fish carcasses along the creek, and I was really, really nervous," she said. "I literally said 'Hey bear!' about 7,000 times and I'm sure that's going to be Finch's first sentence."

She carried bear spray loaned from a fellow Hike It Baby member from the Juneau chapter, and intellectually she knew what to do, but, she said, "I burst into tears when we reached camp that first day."

Things smoothed out quickly after that, though. The daily routine became one of hike for about two hours, break, hike, break, until they reached camp, where Helzer would quickly set up the tent then allow Finch to play with all the gear while she finished her chores. At night they would cuddle up together in Helzer's sleeping bag, Finch bundled up and warm, and fall asleep to the sounds of an Alaska summer.

Helzer and her son reached Bennett Lake on the afternoon of the fourth day after a leisurely start and many stops to chat with trail friends.

Was she glad to see the While Pass Yukon Route train parked at the station, waiting to return her to Skagway?

Here are Heather Helzer's recommendations for parents looking to backpack with infants:

Gain experience without a baby in tow. If you're not an avid backpacker now, it is advisable to familiarize yourself with the skills and tools necessary before you tackle an overnight with an infant. REI offers backpacking classes for those new to the activity, and advice about gear, local trails, and other resources.

Read some books. Having tools at your fingertips are a valuable resource, so I recommend "Babes In the Woods" by Jennifer Aist and "Hiking Alaska" by Mollie Foster (a Falcon Guides book). Both provide practical information that can be used in tandem for successful Alaska backpacking. Everything from a packing list to ideas for nutritious meals can be found in Aist's book, and Foster's has a great lineup of short and longer-distance hikes.

Know your body and limits. Starting with short backpack outings is something Helzer is glad she did. It takes time to acclimate both you and your baby to the idea of hiking in segments all day. Know that everyone needs time to adjust, and you don't want to do it on the trail with two days of hiking ahead of you. Test your body in variable weather conditions and learn what level of activity causes you to sweat, your feet to hurt, and when your back or shoulders become fatigued, all signs that adjustments of clothing or gear may be necessary.

Have a plan. Helzer carried a first-aid kit, has training in adult/child first aid and CPR, and connected multiple times a day with her husband via a satellite communication device called InReach. She also made sure she left a trip plan at home, plus one with rangers upon securing her permit.

Just go. Helzer's strongest message for other parents is not to let fear of what "might happen" overtake the joy of a backpacking experience. Yes, things will go awry; with kids of any age this is a given. But band together with other parents and find your tribe of likeminded moms and dads and kids, and work through the challenges together. Hike It Baby and Anchorage-MatSu Tiny Trekkers are two options for Alaska families to become comfortable in the outdoors with infants and toddlers.

Erin Kirkland is author of the Alaska On the Go guidebook series and publisher of AKontheGO.com, Alaska's only family travel resource.