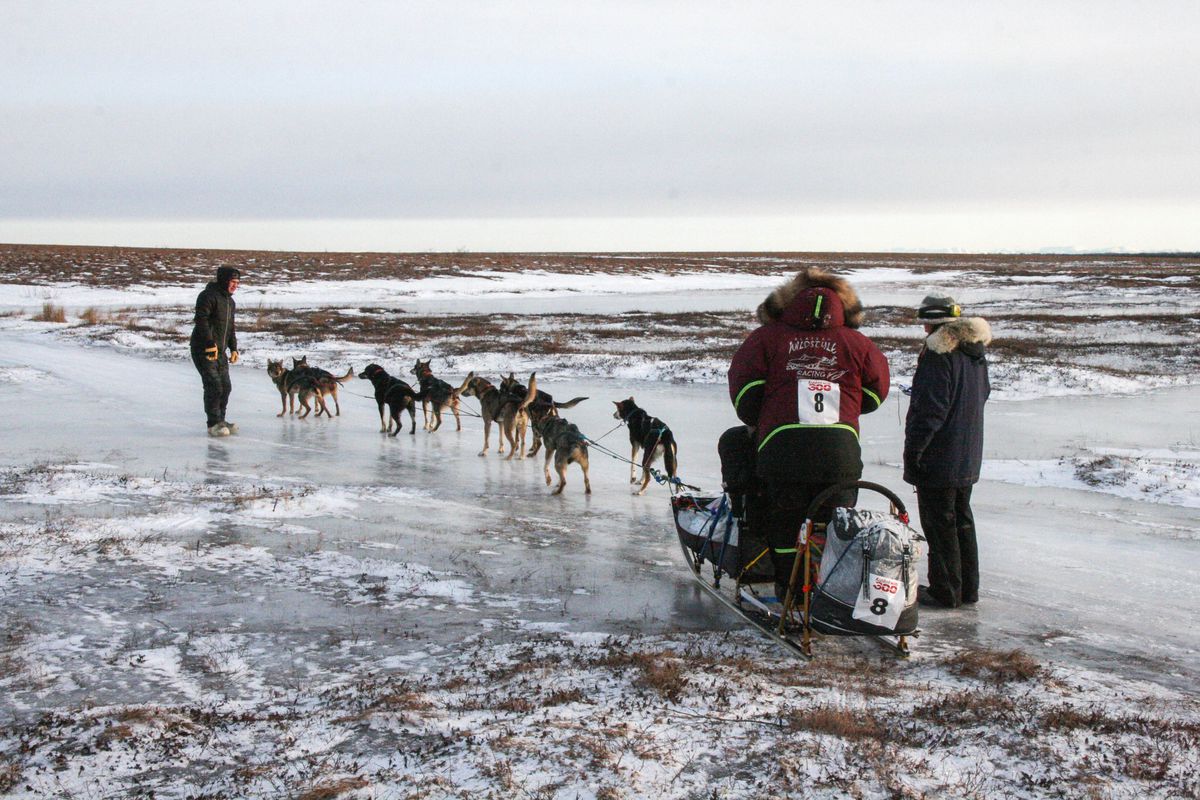 BETHEL — Defending champion Pete Kaiser and contender Joar Leifseth Ulsom traded the lead spot through the night but as the finish line closed in, Kaiser was taking command of the Kuskokwim 300 sled dog race.

The hard ice trail for much of the course was wearing on dogs, and two additional teams scratched overnight, bringing the total who ended early to six.

Kaiser, 30 and a Bethel native who got into competitive mushing as a teen, has won the last three Kusko 300s. Ulsom, 30, is now based in Willow but is originally from Mo i Rana, Norway, by the Arctic Circle. He placed third in 2016. Running in third was Jeff King, 61, of Denali Park, a nine-time Kusko 300 winner and four-time Iditarod champ.

At the back of the pack almost 100 miles behind the leaders was Victoria Hardwick, 32 of  Bethel. She is trying to complete her first Kusko 300. Last year, in temperatures of minus 45, she scratched. Kaiser passed her head on early Sunday. She was still racing to the turnaround at Bogus Creek and he was aiming for home.

Scratched so far in 2018 are Brent Sass, Cim Smyth, Aaron Burmeister, Jessie Holmes, Hugh Neff and Olivia Shank Neff, a rookie who has been racing for only four months.

As of 8 p.m. Saturday, four mushers had scratched because of the icy conditions and others were struggling to make it to the Bethel halfway point.

Veteran musher Jeff King, who has won the Kusko 300 a record nine times and the Iditarod four times, called the trail "brutal rough."

The first musher — defending champion Pete Kaiser — reached the Bethel turnaround at 10:40 a.m. Saturday and teams kept coming all day and into the night. But as Kaiser noted, he wasn't really in the lead at that point once required rest was factored in.

Kaiser, a 30-year-old from Bethel who has won the last three Kusko 300 races, remained in the hunt. By 8 p.m., he had taken the lead in an intensely competitive race. He running just ahead of Joar Leifseth Ulsom, 30, who trains out of Willow. Also in that top group: King, 61 of Denali Park, Ray Redington Jr., 42 of Wasilla, Richie Diehl, 32 of Aniak, Mike Williams Jr., 32 of Akiak, and Matthew Failor, 35, whose hometown is in Ohio but who trains out of Willow.

King, running in a close third and hungry for a 10th win, cost himself a few minutes when he left the Bethel checkpoint only to return moments later. He had forgotten his overboots inside, essential gear for icy trails with temperatures below zero.

The Kusko 300 is the flagship in a suite of races intended to support and promote mushing in Western Alaska. It is known for rich prizes and tough competition, wild weather and welcoming villages. At stake: $150,000 in prizes including $25,000 to the winner plus a bonus to be determined.

This 39th year is bringing its own surprises and challenges.

"The trail was there," Failor said. "It was more like an Olympic luge. I felt like Bob but with no sled."

Dogs not used to running on glare ice struggled to get traction. Sleds slid suddenly this way and that.

"You just pinball off these bumps," Failor said, describing the course as he fed his dogs at the Bethel checkpoint. Among their treats: Yukon River salmon. Failor was rookie of the year in 2011 but none of his dogs had been on the course before. He dropped two in Bethel.

For the first time, the race course was a double loop over tundra, two 140-milers between Bethel and Bogus Creek north of the hub community. Organizers decided to avoid the Kuskokwim River. It was freezing up slowly and dotted with dangerous open holes because of a warmer-than-average winter.

Teams started in Bethel and will finish there, like normal for the race that dates back to 1980. But they also are returning to Bethel at the halfway mark, then doing the whole thing over again.

The community of Bethel hasn't done a checkpoint before and scrambled to set one up at Mikelnguut Elitnaurviat, a local school. Dave Cannon, who runs the usual turnaround checkpoint in Aniak, flew to Bethel to help Jen Peeks and other locals.

"We were scared last night and early this morning" about getting everything in order, said Cannon, who was at the checkpoint until 1:30 a.m. Saturday and returned about five hours later.

As it turned out, lots of volunteers showed up. People came loaded with food for mushers and volunteers too: stews and pasta, cakes and muffins, fresh fruit and coffee. The Alaska National Guard hauled water, moved hay and dog food, and roughed up the ice where teams come in so it wasn't quite so slick.

Kaiser helped maintain the icy part of the trail and trained on ice most of the winter. But some mushers including those from Southcentral and Interior have been mainly running dogs in snowy conditions.

"There's a slight bit of unknown coming up," Kaiser said during his break at the Bethel halfway mark.

At that point Jessie Holmes, 35 of Nenana, was the race leader.

Things changed fast. Holmes left the Bethel checkpoint just after 1 p.m. then headed back to declare his race over. Aaron Burmeister, 42 of Nome, also returned to Bethel to end his race early. Brent Sass, 38 of Manley Hot Springs, and Cim Smyth, 41 of Big Lake, scratched before leaving the Bethel checkpoint.

"It's the same thing for all of them," Kuskokwim 300 race director Madelene Reichard said Saturday evening. "The dogs aren't used to running on the ice, and people were wanting to keep their dogs healthy."

Mike Williams Jr., who was running with the leaders as of Saturday evening, is well familiar with the terrain and training on ice. Racing on it is another matter.

"I think they are as tired of the ice as much as I am," he said of his dogs at the halfway mark.

From the village of Tuluksak to Bogus Creek, the trail was much better, he said.

Kaiser was looking forward to the turn at Bogus Creek.

"I just want to get back here," said fellow musher and friend Richie Diehl. The lure and relief of the finish line is always on his mind, Diehl said. "I was thinking that on Mile 2. Or Mile 1."

Mushers are doing their best on a rough trail, Kaiser said.

The alternative would have been postponing the race indefinitely and organizers didn't want to do that.

As Kaiser left the Bethel checkpoint, his sled slid sideways. He stayed on it.

Bev Hoffman, a Bethel resident, race volunteer and musher, said she would have crashed at that point.

"That's awesome," she said as Kaiser's team grew tiny on the trail over the tundra.

The race is expected to wrap up midmorning Sunday.