There’s plenty of fuel, food and beer. But people trapped by Hatcher Pass avalanche are getting antsy. 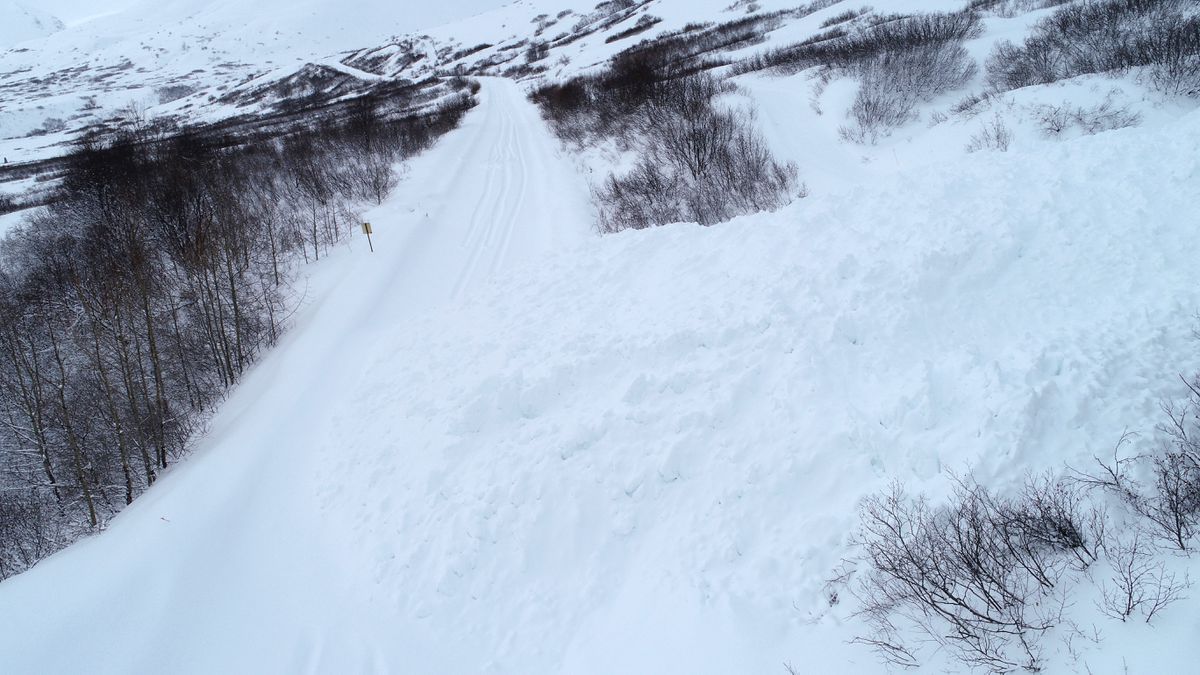 An avalanche closed the road to Hatcher Pass between the Gold Mint trailhead and Archangel Road, Mile 15.1, on Monday. (Photo provided by AK DOT)

An avalanche closed the road to Hatcher Pass between the Gold Mint trailhead and Archangel Road, Mile 15.1, on Monday. (Photo provided by AK DOT)

PALMER — The road up to Hatcher Pass remained closed by avalanche danger Tuesday as the state started mitigation work and people on the wrong side of the slide got a little antsy.

The Alaska Department of Transportation hoped to reopen the road by Wednesday. The road, which starts at the Glenn Highway near Palmer, was closed at Mile 8.5, at a gate just past the bridge across the Little Susitna River.

The only activity planned Tuesday was triggering smaller slides to stabilize the area so road-clearing could begin, state officials said.

The Hatcher Pass Avalanche Center warned of high avalanche danger Monday into Tuesday. Two slides — each an estimated 4 to 6 feet deep and 100 feet wide — crossed the pavement near Archangel Road, according to an observation posted by center.

As of midday Tuesday, 10 people were still trapped above the slide: eight at Hatcher Pass Lodge at 3,000 feet altitude, and another two at Gold Cord Mine. The historic private inholding sits in a high alpine bowl above Independence Mine.

People at the lodge were getting restless.

Four more guests from Anchorage hoped to ski out via the closed road later in the day, Wurlitzer said.

That's not to say the lodge is in any kind of trouble.

"We've got plenty of diesel to keep the generator going. Stuff like that," Wurlitzer said.

There's also plenty of food, but his guests may not even be there by evening.

Wurlitzer worked on summer reservations Tuesday morning. Does he get in and out much? "Seldom," he said, unfazed by the closed road. "I don't care. I'm here anyway."

The state will assess the avalanche danger Wednesday morning before reopening the road, officials say.

A state avalanche technician planned to drop explosives from a helicopter Tuesday to trigger smaller avalanches, Alaska Department of Transportation and Public Facilities spokeswoman Shannon McCarthy said. That's in hopes of reducing the pressure on the snowpack and avoiding large, naturally caused slides.

The two men up at Gold Cord Mine said they hadn't seen much avalanche activity — except for one "really spectacular" one, to hear Dan Renshaw tell it.

"Fred's A-frame is not far from where it came down," Renshaw said by phone Tuesday. He lives at the mine, bought by his father in the 1930s.

Fred Trimble, who built the A-frame at the mine 10 years ago, provided a report of the big slide that let loose at about 4,400 feet on a 35-degree slope. He estimated it measured 1,000 feet long and 700 feet wide, according to his observation with the Hatcher Pass Avalanche Center.

Otherwise, and except for a biting north wind, the men were doing "really fine" on a sunny day Tuesday, Renshaw said.

"We're on the right side of the snow slide," he joked.

Trimble hoped to get out by Thursday, when he and his wife are to watch their grandchildren in Anchorage.

Renshaw made the short trip Tuesday morning to the A-frame from his cabin, built the winter of 1939-40.

"When it's snowing, he always wins," Renshaw said. "So I broke trail up here since it was sunshining."