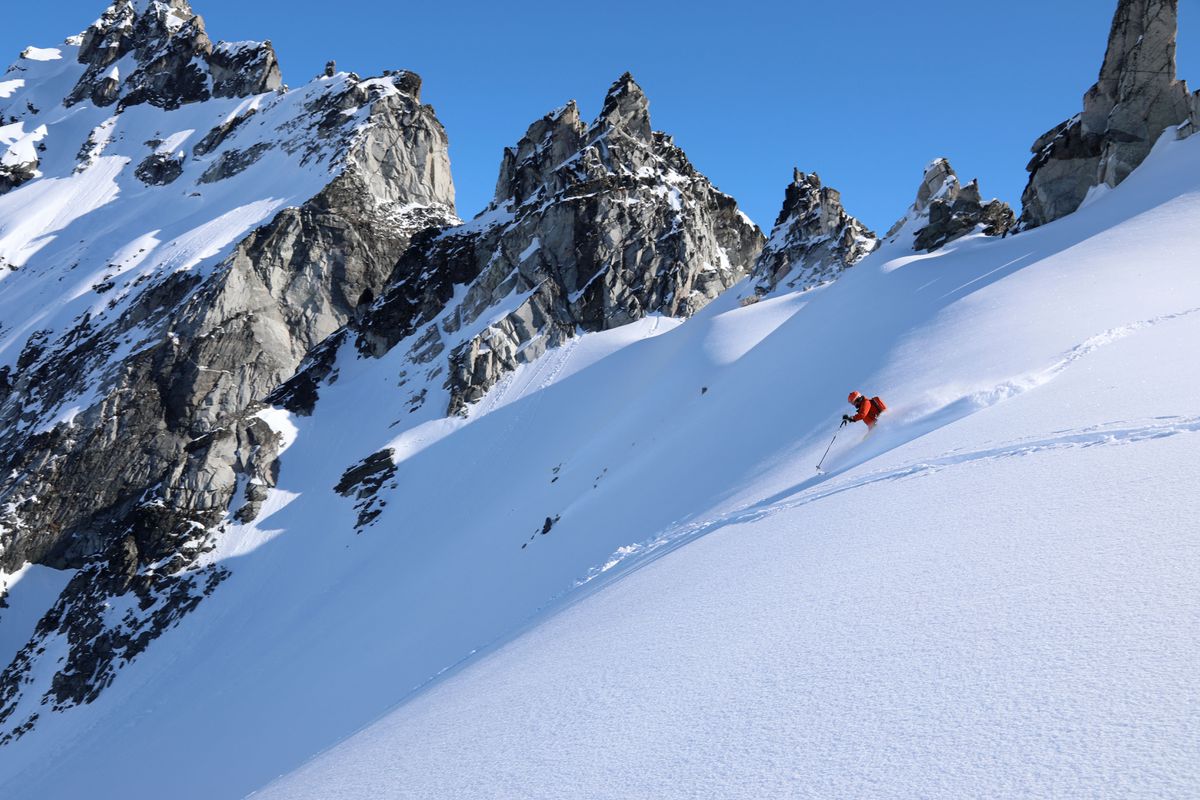 A remote stretch of Alaska mountains across Cook Inlet from Anchorage has become the center of a court fight between a heli-skiing company and the Trump administration.

The company, Tordrillo Mountain Lodge, is accusing federal land managers of jeopardizing clients' safety by issuing a permit to a competitor without proper review.

At issue are the peaks, ridges and valleys of the Tordrillo and Neacola mountains, which have long doubled as playgrounds for some of Alaska's most daring adventurers.

Until recently, the area attracted little traffic — mostly experienced skiers and climbers who would fly the 90 or so miles from Anchorage in single-engine planes equipped with skis or floats.

But the mountains have become increasingly popular with Alaska's growing heli-skiing industry, in which helicopter pilots drop customers at the top of untouched slopes, then pick them up at the bottom.

The lodge, owned by a group that includes Olympic gold medal-winning downhill skier Tommy Moe, says the arrival of new users has increased risks of avalanches and helicopter collisions.

The suit also alleges that the action by the federal Bureau of Land Management has undermined the company's business. In its legal filings, it says the government has allowed more skiers to access a "finite resource" — fresh powder.

"My fear is that there will be a fourth, a fifth and a sixth permit and it's just going to ruin it all," said Mike Overcast, one of the lodge's founders and a veteran of Alaska's heli-skiing industry. "There's no other place that this kind of growth would be allowed in the U.S."

Overcast's company sued the federal government in March with the help of a Colorado-based law firm that specializes in ski-related litigation. It asserted that the Bureau of Land Management, an agency of the Interior Department, violated the National Environmental Policy Act and the Federal Land Policy and Management Act.

The lodge hired a second law firm, WilmerHale, to help press its case with the Interior Department, Overcast said.

The lawsuit, according to observers, underscores the value of the state's few remaining pristine areas for heli-skiing, which in other places — such as Thompson Pass, outside Valdez — have become increasingly crowded.

Officials at the U.S. Department of Justice, which is defending the BLM, declined to comment on the lawsuit. In its written response in court, government attorneys accused Tordrillo Mountain Lodge of using federal environmental laws in an attempt to "bludgeon a competitor from the market."

"There can be no reasonable argument that in enacting NEPA, Congress intended to benefit the business interests of heli-skiing operators," the attorneys wrote.

In early May, a federal judge, H. Russel Holland, dismissed part of the lodge's complaint, saying the company lacked standing to sue under NEPA.

But he said another part of the challenge — the alleged violation of the Federal Land Policy and Management Act — could proceed. In his order, Holland wrote that the BLM's decision to grant the new heli-skiing permit "creates a credible threat of harm to human health and safety."

The subject of the dispute is two blocks of federal land totaling 670 square miles, split between the northeast end of the Neacolas and the western side of the Tordrillos.

There's no road access to the mountains, and the BLM estimates that fewer than 100 people visited the permitted area in all of 2013. But both ranges are visible across Cook Inlet from Anchorage, and a small number of climbers and skiers have been staging expeditions to the area, particularly the Tordrillos, since the 1950s.

The Tordrillos boast several peaks above 11,000 feet and include Mount Spurr, a volcano that erupted in 1992, as well as glaciers that stretch as long as 30 miles.

The Neacolas are stark, with dark granite cliffs and spires, and they're relatively unexplored. Only two of the range's major peaks had been scaled by the early 1990s, according to the American Alpine Journal.

The part of the Neacolas used for heli-skiing is a federally designated "area of critical environmental concern," with "hanging valleys and ice and snowfields [that] dominate the landscape, interspersed with razor-sharp ridgelines," according to a BLM description.

"Anywhere else in the country it would be a national park," Overcast said.

For decades, skiers and climbers accessed the area with single-engine planes.

But that's shifted as it's become increasingly popular for heli-skiing. In 2004, a group led by Overcast and Moe bought the building they turned into their lodge, which sits on Judd Lake in the Tordrillos' eastern foothills.

The dilapidated, converted building has been extensively renovated, and there are now two other lodges on the lake. The company can guide up to 30 guests a week, and it operates for two to three months of skiing each spring, Overcast said.

Visitors pay $14,000 a week, he added. They can enjoy a sauna, massage therapist, groomed cross-country ski trails, high-speed Wi-Fi, a 500-bottle wine cellar and a gourmet kitchen that features white king salmon and Kachemak Bay oysters, according to the lodge's website.

From the lodge, small planes fly skiers to a staging area in the mountains, where helicopters pick them up and drop them off atop powder slopes.

For its first 10 years, the lodge did its skiing on the eastern side of the Tordrillos. That's state land, which is only lightly regulated for heli-skiing.

Then, the lodge moved to expand into the rest of the Tordrillos, and into the Neacolas, by applying to the BLM for a "special recreation permit." It was issued in early 2014, after the government did an environmental assessment and found there would be "no significant impact" from heli-skiing.

For the next three winters, Tordrillo Mountain Lodge was the only commercial heli-ski guiding company permitted to operate on those 650 square miles of federal land.

But the area was becoming better known as a destination for professional skiers and wealthy vacationers from around the world.

"It's probably just starting. It's nowhere near Valdez, but it's coming," said Doug Brewer, a pilot who flies skiers and climbers to the Neacolas and who helped pioneer Valdez's heli-skiing industry.

Starting in 2013, the popular ski movie company Teton Gravity Research filmed segments in the Neacolas. One highlight video featured by Powder magazine refers to "steep lines, minty fresh snow and jaw-dropping views" that will "send a cool breeze right down your spine."

In 2017, the BLM issued a second permit for guided heli-skiing to Silverton Mountain Guides, which is based in Seward. Aaron Brill, the chief executive, said his company flies in the Tordrillos and Neacolas only occasionally, when weather and conditions are best there.

Then, in January, the BLM issued a permit to a third heli-ski guiding company, Alaska Snowboard Guides, run by Dave Geis.

That company, which also works in Valdez, set up a base near Blockade Glacier, right at the base of the Neacolas. The operation sits on property rented from Ron Eagley, who owns Gwennie's Old Alaska Restaurant on Spenard Road in Anchorage.

Eagley's father-in-law claimed the land at statehood and planned to escape there, by plane, in the event of nuclear war between the Soviet Union and the U.S., Eagley said. The site is just outside of what could be a 50-mile blast radius from Anchorage, and it's in the opposite direction from the prevailing winds, he added.

"He planned on taking one of his kids and his wife and they would go out there and live out the nuclear blast," Eagley said.

The arrival of Geis' company meant there would be another helicopter operating in the Neacolas regularly during winter. And Overcast, the Tordrillo lodge co-owner, said Alaska Snowboard Guides never shared information about where it would be skiing each day.

That has dramatically increased the risk that Tordrillo Mountain Lodge's guides, pilots and clients must assume to use the same area, the company argues in its lawsuit, citing the potential for midair collisions and avalanches.

"It looks like a huge amount of area," Overcast said. But, he added: "Maybe 5 percent of what you see when you look on a map is actually skiable terrain. Everything else is cliffs and ice and glaciers."

While the BLM did a formal environmental assessment before issuing the initial heli-ski guiding permit to Tordrillo Mountain Lodge in 2014, it used a less rigorous process to issue the next two permits, saying a new assessment wasn't needed because the other companies' plans for the area were nearly identical.

Overcast said the lawsuit is all about the environmental review process, and how the BLM, allegedly, bypassed requirements for public notice and public comment.

"It has nothing to do with competitive interest, or issues that arise between operators," he said.

"They're willing to go to any length to try to keep us out of what is public land," he said. "It's them trying to be the only ones that are there."

Geis said Alaska Snowboard Guides' base, so close to the Neacolas, actually makes it safer for all the heli-ski companies operating in that area. In his operations plan submitted to the BLM, Geis said his company could share avalanche forecasts with other companies and give assistance or shelter if another operator gets stranded by weather or mechanical problems.

Geis said he shared his guides' radio frequencies with Tordrillo Mountain Lodge to allow for better communication. But he said it was Overcast's responsibility to check in with Alaska Snowboard Guides on days his lodge flew clients to the Neacolas, since that range is farther from the lodge's home base.

The BLM, in its own legal filings, said it accounted for safety when considering Alaska Snowboard Guides' application. It required the company to submit a safety plan, meet federal requirements for flying its helicopters and communicate with the two other operators in the area, Justice Department lawyers wrote.

Geis said he wants to keep his operations "small and tight"; he had six clients a week this winter. But that's not to say he won't expand, he added.

"It's a special place, and we're happy to share it with people," he said.

The company's permit means there are more opportunities for skiing in the remote Neacolas. But the addition of Alaska Snowboard Guides, and its daily use of the area, has also fundamentally changed it, said Brill, who runs Silverton Mountain Guides.