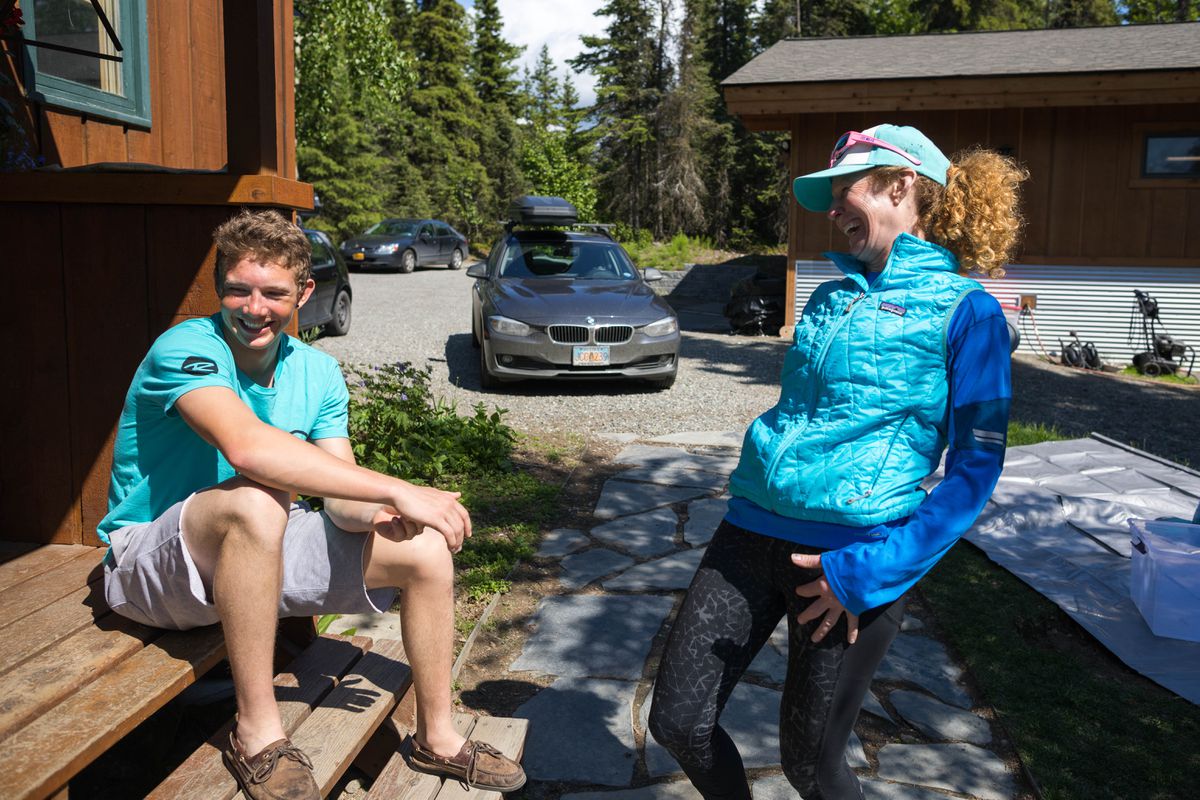 Canyon Tobin, 19, and his mom, Nora Miller, tell the story of how they summited Denali together. (Loren Holmes / ADN)

Canyon Tobin, 19, and his mom, Nora Miller, tell the story of how they summited Denali together. (Loren Holmes / ADN)

When Canyon Tobin begins college this fall at Dartmouth, he'll have a how-I-spent-my-summer story not many teens can match – and might not want to match.

He spent nearly two weeks roped to his mother.

Tobin, 19, and his mom, Nora Miller, 50, are back in Anchorage after reaching the summit of North America's highest peak last week.

The pair climbed to the top of 20,310-foot Denali without the help of a guide. Though no records are kept on such matters, spokeswoman Maureen Gualtieri of the National Park Service said an unguided mother-child climb is rare.

Tobin is a Service High graduate and an elite-level cross-country skier who was the state high school Skimeister in 2016. He's nearing the end of a gap year between high school and college, which he used to train with Alaska Pacific University's ski team.

Miller is an accomplished athlete and adventurer who has reached Denali's summit twice and made a third trip to the mountain to ski the West Rib. She and her ex-husband, Carl Tobin, named their son after Utah's Canyonlands National Park, where the couple went on their second date — Miller fell 110 feet, and Tobin saved her life.

Mother and son flew to Kahiltna Glacier on May 28. They reached their destination 11 days later on Friday, June 8, after a summit push that lasted 13 hours. They descended quickly on skis and were back in Anchorage by Sunday.

Miller and Tobin were roped together nearly the entire time they were moving on the mountain. The only exception, Miller said, was on their descent when they reached 7,000 feet and the snow underfoot was firm.

They shared a small tent and spent very little time apart, and they lived to tell about it.

"There was never any big tension between us," Tobin said.

They dubbed their expedition "Family Fun," and the closest they came to a family feud was on their way down, shortly after they reached 17,000 feet where they had cached their skis and other supplies.

"We had these 80-pound packs on, and I'd get up and almost fall down," Miller said. "That's when we started getting snippy."

"That's when you started getting snippy," contradicted Tobin.

"I was snippy," Miller admitted.

They exchanged a few sharp words during that interlude, when both were on the edge due to sleeplessness and physical exertion.

Both were carrying big packs of gear and garbage. Tobin toted the pair's Clean Mountain Cans, which climbers on the West Buttress are required to carry this year to alleviate the amount of human waste and toilet paper left on the mountain. Miller carried the rest of the trash.

And so when his mother started to get snippy, Tobin gave her a reality check, which Miller returned in kind.

"Mom, I am literally carrying your s— down," Tobin told her.

"Canyon, I am literally carrying your trash down," Miller replied.

And soon enough, the moment passed.

The hardest part of the climb came early last week when Miller and Tobin made their first summit attempt. They left their camp at 17,000 feet and by the time they reached 19,000 feet, Tobin was sick from the high altitude. He said it felt like his head might explode.

"I wasn't drinking as much water as I should have," he said. "I started the day with a headache and it got worse and worse. Your brain is literally expanding."

They turned around and made a long and sometimes scary descent back to 17,000 feet.

"I kept asking, 'How are you doing? Do I need to call SOS? Let's sit here for a second or two.'

At one point, Tobin told his mom to stop thinking about signaling for help. "We'll lose all our gear," he reasoned, knowing that rescue teams save people but don't save their gear.

As they climbed back to their camp at 17,000, Miller kept the rope between them short so she could steady her son if he got too wobbly.

"He did great, though," she said. "He clipped every single piece of gear he needed to. I'm really proud of him."

They spent three days in their tent at 17,000 feet so Tobin could recover. Then Friday dawned with ideal conditions for a summit attempt.

They left camp early and broke trail as they climbed upward, the silence broken every few minutes by Miller: "How's your head?" she would ask her son.

At 5 p.m., they stood at the top of North America.

"It was an amazing experience for me, for sure," Tobin said.

"You said you teared up," Miller said.

"I did, I totally did. It was exhilarating," Tobin said.

After 10 or 15 minutes, they began their descent, with Tobin in the lead. It was a crowded day on the mountain, and at one point several other climbers heard Miller call out to ask Tobin if he wanted to stop and rest for minute.

"Did he just call you mom?" asked a nearby climber.

That was the general response from people on the mountain when they learned Miller and Tobin were mother and son, Tobin said.

At home in Anchorage, however, they encountered some doubt as they prepared for their climb. Even people who know Miller and are familiar with her extensive climbing experience expressed concern: Just the two of you are going? Shouldn't you be worried it's just two of you?

Tobin, who has hiked most of the Chugach front range but had never done any mountaineering prior to the Denali climb, said his mother prepared him well. She taught him how to travel on glaciers, and they rigged a rope in their garage so they could take turns pretending to pull each other out of a crevasse.

Gualtieri, the Denali National Park spokeswoman, said it would be difficult to determine how often a lone woman has led a son or daughter on a Denali climb.

"I suspect it's rare to see a mother-son team," she said by email. "… I suspect it's happened before, but our database does not include relationships between team members. … I did bounce it off a couple rangers, and they have the same thought."

Gualtieri recalled two notable parent-child climbs: In 1995, 12-year-old Merrick Johnston of Anchorage became the youngest climber to summit Mount McKinley during a climb with her mom, Jennifer Johnston, although the pair were accompanied by a guide. And in 2001, Galen Johnston of Talkeetna lowered the youngest-ever record by summiting at age 11, along with both of his parents, Cari Sayre and Dave Johnston.

Miller and Tobin weren't trying to make history or set any records. They just wanted to climb Denali with each other.

"I wanted to do something kind of big in Alaska before going back east where there are no mountains at all," Tobin said. "I thought it might be kinda special to do a mother-son trip."