Shooting from your hind legs — aka offhand shooting — isn’t easy, but it can be useful 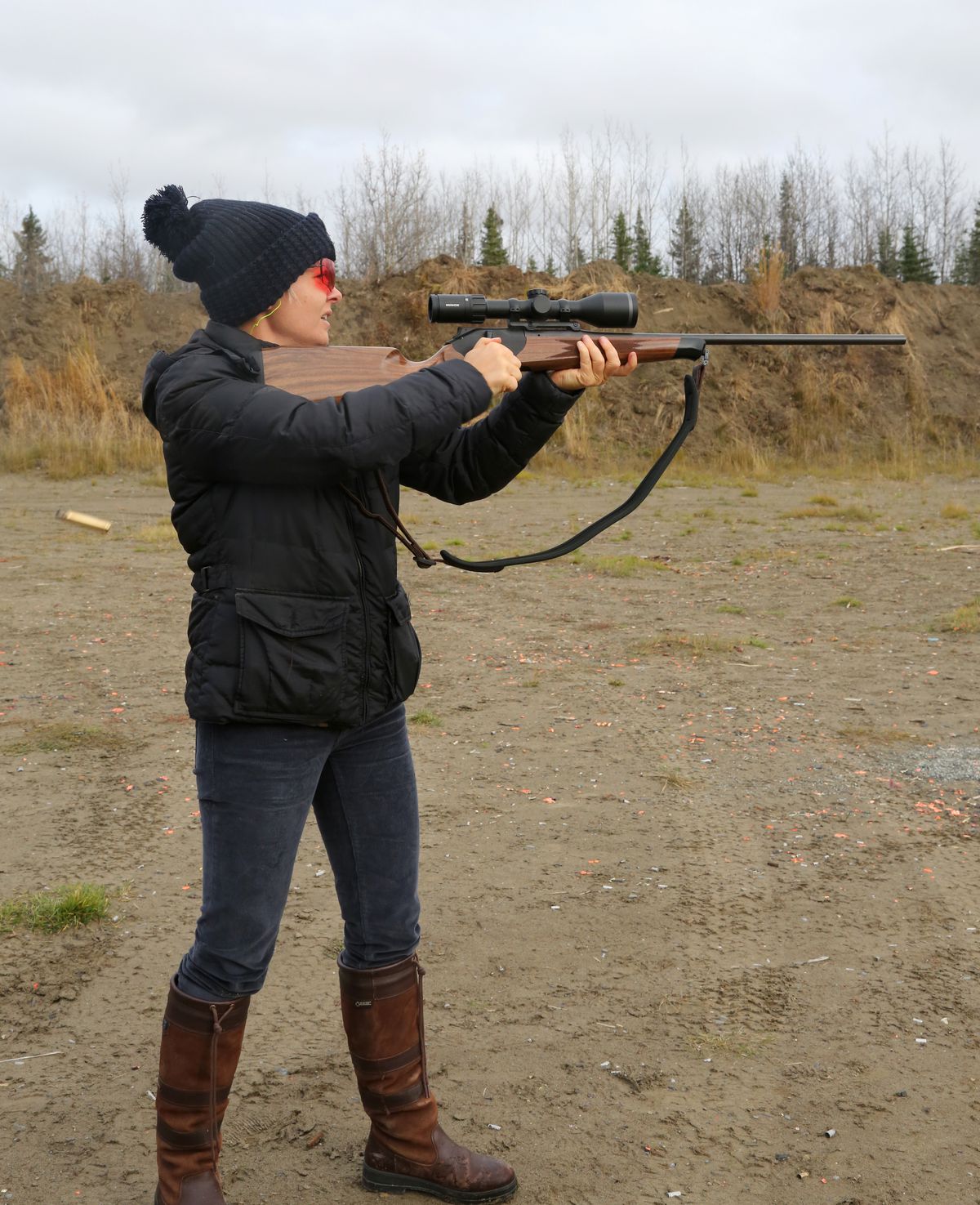 “Now you need to shoot from your hind legs,” I said to Christine.

Looking at me as if I had three heads, a look I’ve grown accustomed to, if not fond of, she said, “I don’t have hind legs, I have arms and legs, I’m not a Labrador.”

It’s a phrase I imagine I picked up from some old shooter years ago who had told me I needed to learn to shoot from my hind legs. It worked for me, and the fact it causes Christine to fret forces me to use it every chance I get when in her company.

I expect there are fair number of folks who have heard it as well. But for those who are wondering what the hell I’m talking about, it references shooting while standing with no form of support other than your arms (or front legs) and the hind legs. In other words, offhand shooting.

Christine is quick to shoot while sitting, her favorite field position, or prone, over a backpack, her second favorite. When it comes to offhand shooting, she isn’t alone when she avoids it, doesn’t want to practice it and figures that, if she must shoot offhand, she just won’t shoot.

Fair enough. Not wanting to do things we aren’t good at seems a common trait in the human condition. Offhand shooting is one of those things that, in general, folks aren’t particularly good at and thus, avoid.

Over the years, I have shot more game with a rifle, small and big, from the offhand position than all of the other options combined.

Time and circumstances dictate that, not preference. I grew up shooting that way and then polished my skills as an offhand shooter with smallbore and highpower rifle silhouette shooting. It’s second nature to me, and I’ve learned some things along the way that might be useful.

The inability to hold a gun steady with only the arms to stabilize it is the problem. Offhand shooting is the antithesis to what we normally strive for in shooting — getting the sights steady on target and a slow press of the trigger as the gun goes off while the sights stay where they are supposed to.

That isn’t possible in offhand shooting. Doesn’t matter how strong you are, how much practice you do, you simply cannot hold a firearm that steady without support. But folks still try. They’ll get on target and keep trying to hold that perfect sight picture and then they get tired, and pretty soon they yank the trigger in exasperation, and miss. They don’t want to do it anymore — until they are in the field and the only shot presented must be taken offhand and the process is repeated.

Instead of fighting what cannot be fought, there is another approach that, if you can shut off that learned behavior from the bench, you can use the movement that cannot be eliminated to advantage.

The best way I have to relate to this is wingshooting. The hunter sees the flying bird and swings the shotgun through the path, touching the shot off as the muzzle of the shotgun swings past the bird.

If you’ve done this, you know there isn’t much wobble in the gun. The movement keeps it tracking and a quick slap of the trigger completes the shot.

It’s the same principle in rifle shooting. Let’s say you have a target out at 100 yards or so — it doesn’t matter what it is, a paper bull’s-eye, a soda can or a metal gong. Instead of trying to place the sight or crosshairs directly on the center while you try to stifle movement that you cannot, start the sight picture to either side or above or below the target, far enough out that you can establish a steady movement toward the spot where you want the shot to break.

As the front sight or crosshairs intersect with where you want the shot to hit, press the trigger. The process needs to be quick. Mount the gun to the shoulder, acquire the sight picture, move across and slap the trigger. Not a jerk, mind you — a press in an extremely compressed space of time. If you try to finesse the shot, you’ll be right back to where you were before, wobbling all over the place and missing. If it doesn’t present a good shot, just as in hunting, let the gun down, take a breath and try again.

In time, you’ll learn to call the shot — that is, you know where it is going when you press the trigger, and you know when it won’t go where you want it to. Don’t take that shot.

This is the place where a good trigger is worth its weight in gold. Not, mind you, the competition triggers that are unsafe for hunting. A trigger that breaks with 2.5 to 3 pounds of pressure is perfect for hunting.

Once at a silhouette match, a fellow shooter wanted me to try the trigger on his rifle. When he handed the rifle to me, he told me not to point the muzzle up or the weight of the trigger would make it go off. Best offhand trigger I ever used, but a bit too spooky, even on the range.

I know some will say just use shooting sticks. I’ve tried them, not to use, but to see how they worked. They help, but I’m not going to saddle myself with a gadget that seems more trouble than its worth.

All of that isn’t to say the technique I describe will make you a great offhand shooter. It works for me, but I’ve practiced it a lot. If you try it, you’ll need to do the same to get good results. This is more about sharing something I’ve learned over a fair amount of burned-up gunpowder that might benefit someone trying to master the offhand shooting of the long gun.

As to the terminology, well I’m going to continue to call it shooting from your hind legs. Your legs do, after all, grow out of your hind end.

Steve Meyer is a longtime Alaskan and avid shooter. He lives in Kenai.