From Llewellyn Glacier to Emmonak, these men in motorboats traveled the length of the Yukon River in less than 25 days 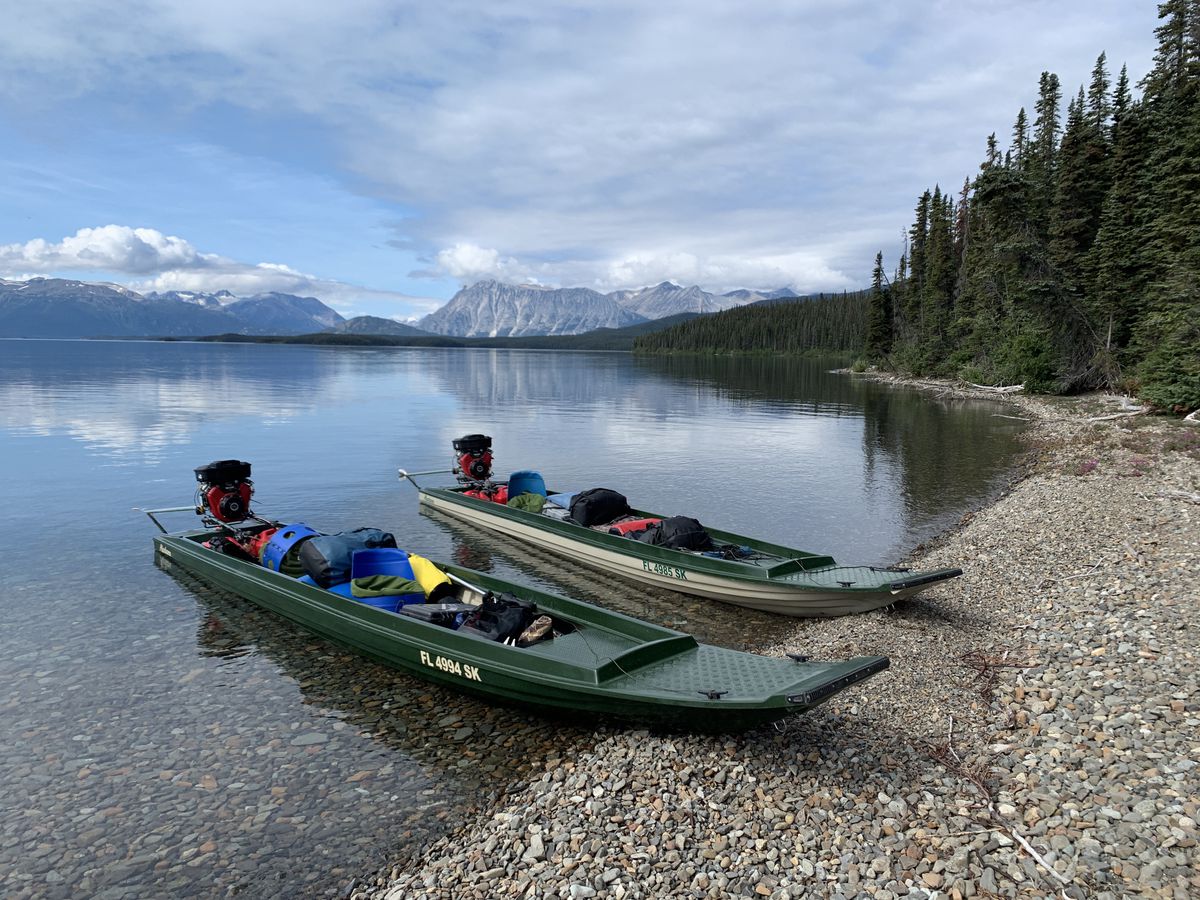 "Alaskanu" boats sit on the shore of Atlin Lake on July 31, the first day of the group's Yukon River journey. (Photo by Jon Dobbs)

"Alaskanu" boats sit on the shore of Atlin Lake on July 31, the first day of the group's Yukon River journey. (Photo by Jon Dobbs)

The boats came from Vietnam, the motors came from Thailand and the man with the plan came from Florida.

Together they traveled the Yukon River more than 2,000 miles from source to sea in what may be the fastest descent of the historic river.

Jon Dobbs, a retired Florida game warden from Palmetto, Florida, masterminded the trip, which started July 31 at the foot of Llewellyn Glacier in British Columbia and ended Aug. 25 in Emmonak, a village not far from where the river empties into the Bering Sea.

Three men in two boats made the trip in 24 days, 23 hours and 45 minutes. They got about 25 miles per gallon while averaging 20 mph.

Dobbs, who said he spent four years researching and planning the trip, believes no one has made a faster run of the entire river. His group started farther upriver than Lake Bennett and Whitehorse, where a majority of trips begin.

“The only people who have started at Llewellyn have all been in canoes and kayaks, and they’re paddling very slowly,” said Dobbs, 51. “I found a couple blogs where a kayaker or canoer started at Atlin Lake, but we did more than that — we did as far up the tributary we could. We hiked up the glacier and started our GPS at the glacier, got in our boats and started descending.”

Starting at the glacier meant shooting through Class III and Class IV rapids on a two-mile stretch of the Atlin River, he said.

“That’s another reason people don’t do the full descent in a motorboat,” Dobbs added. “We had to do some fiberglass work at the other end. We were fortunate we made it through.”

That was perhaps the gnarliest part of the 2,058-mile journey for Dobbs, Timothy McGee of Longwood, Florida, and Troy Anzalone of Arlington, Nebraska.

Dobbs said the group had favorable weather much of the way, including few headwinds on the Lower Yukon.

Whether the group set a speed record is hard to ascertain. Jeff Brady of Skagway, the co-founder of the Yukon River Quest paddling race, said he’s unaware of source-to-sea speed records, and two outfitters in Whitehorse said the same thing.

“Who the hell wants to do that in a fast time?” said Scott McDougall of Kanoe People.

Dobbs, for one. After researching books and blogs, he became convinced no one had done the whole Yukon in a motorized boat starting from the glacier, and that intrigued him.

“I thought to myself, there’s very few things out there in life that somebody hasn’t already done, and I thought this is pretty amazing that no one has started at Llewellyn Glacier with motorized boats,” he said.

Dobbs said he’s a hillbilly from the Ozarks who moved to Florida the day after he graduated from high school. He joined the Florida Marine Patrol and eventually became a game warden.

“I love boats, I love rivers and I love seeing what’s around the next bend,” he said.

Dobbs, McGee and Anzalone traveled in long-tail boats Dobbs calls “Alaskanus.” Each is 23 feet and 6 inches long and 31 inches wide.

The style of boat originated in Southeast Asia years and years ago, he said, and are used all over the United States and Canada.

“They run very shallow so you can get over gravel bars, and the props are above the bottom of the boat. They’re air-cooled and very fuel efficient,” he said.

Dobbs drove the boats from Florida to Canada, and will drive one of them back to Florida — he’s leaving one with a friend in Anchorage.

Each boat carried 600 pounds of men, fuel, food and gear, including a maximum 12 gallons of fuel. Their gear included paddles, life jackets and flotation bibs, and their longest stretch between fuel stops was 266 miles.

“I made a lot of phone calls ahead of time making sure villages had fuel,” Dobbs said.

The boats are powered by long-tail motors made in Thailand and sold by Dobbs, who imports and distributes them through at Swamp Runner Mud Motors in Palmetto.

The motors were quiet enough that the men could talk while running their boats, Dobbs said. At the end of the journey, he sold one of them to a man in Emmonak.

Dobbs and his companions aren’t the only ones who made speedy trips down the Yukon this summer.

Mile 1856, Emmonak. After 28 days and 21 hours we have made it and Yukon Grenadier is complete. More photos will follow covering the gaps over the last week or so as we now begin our journey home. #yukongrenadier #grenadierguards #britisharmy #BeTheBest #canoeing #yukon #completed

Also on the trip were Tom Bolitho, Joe Haywood and Alisdair Szyszko. All are soldiers with the Grenadier Guards, a British Army regiment that is part of the Queen’s guard.

“Sadly, no one keeps any records and the (people at Guinness World Records) don’t want to be involved; (their) party line is ‘that a single point of the source cannot be identified,’ ’’ Frith said in a direct message. “The Grenadier Guards team completed the river in 28 days 21 hours and 15 minutes and their route is widely regarded as the correct route.

"Again, sadly people who achieve this feat don’t tend to track it or use a webpage as evidence.”

Official record or not, Dobbs said his group’s trip showed the full Yukon is a possibility for people who don’t have unlimited time.

“This is something someone could do that doesn’t have vacation time to do that river for months and months,” he said.