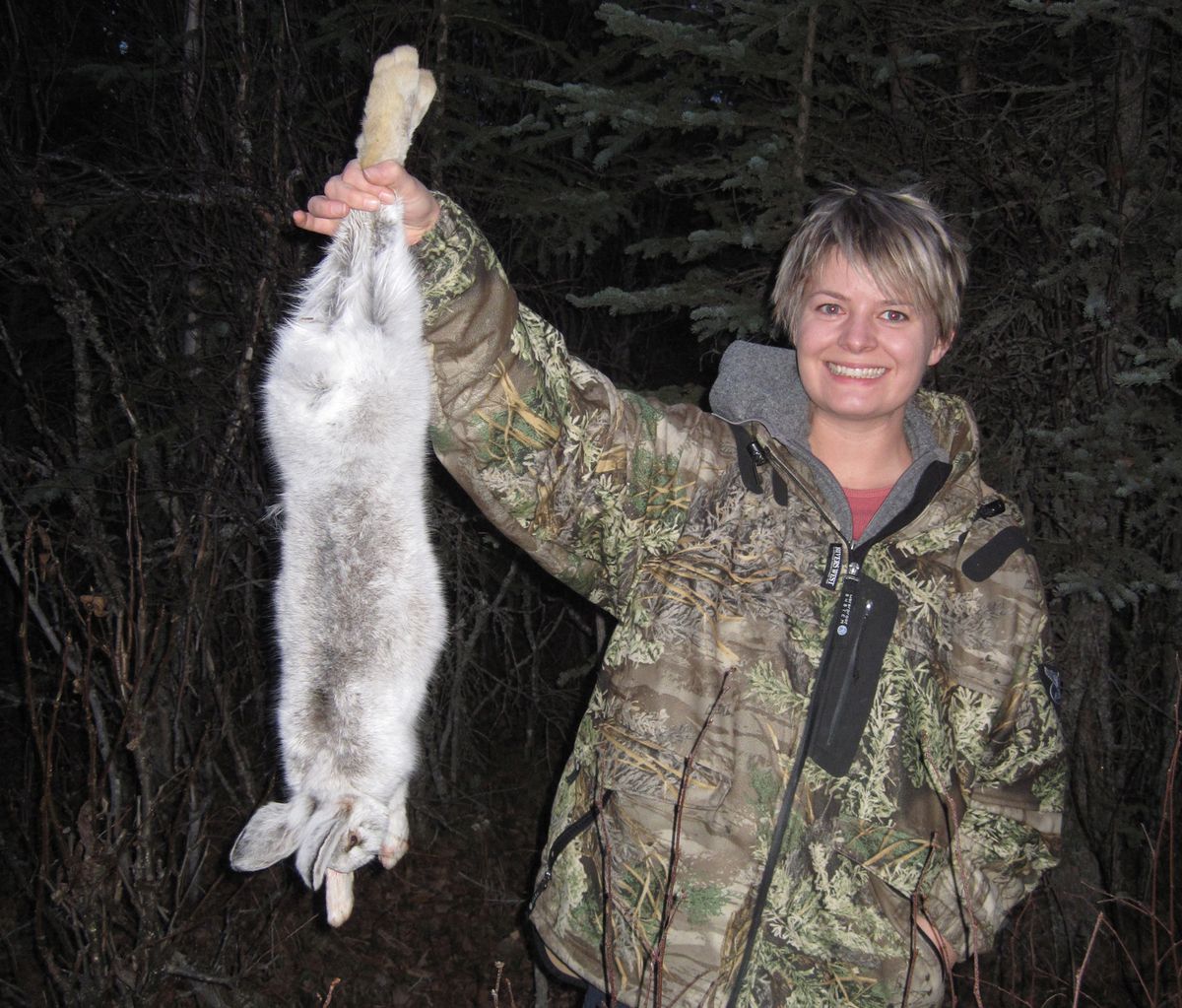 Christine Cunningham with a snowshoe hare she shot while hunting on the Kenai Peninsula. (Photo by Steve Meyer)

Christine Cunningham with a snowshoe hare she shot while hunting on the Kenai Peninsula. (Photo by Steve Meyer)

One of the unquestioned laws of social media allows that the bond between friends might include strangers, a number that cannot exceed 5,000 on Facebook.

In this world, which resides on my phone and desktop, it seems natural to consent to friendship based on such factors as whether we have met in person or that you have an English setter in your profile photo, and so do I.

My first social media account is more than a decade old. When I joined, it was to stay in touch with a single extroverted friend. He had 800 friends, a number I thought excessive at the time.

In terms of how many people you might invite to dinner, 800 seems like a lot. Yet he shared his dinner plate with a target audience. And, as I was learning how hunt small game, I shared a photo of myself with a dead rabbit I had shot.

I think I had about 25 friends at the time, and the number went down to 22.

The day I got the rabbit, Steve and I had driven down a gravel road littered with junked vehicles. A few of the vacant lots were once gravel pits, which made them targets for torching cars and disposing of refrigerators. These areas served as unofficial shooting ranges, and you could find a variety of appliances full of bullet holes.

Box televisions seemed like a popular choice, and I had never known exactly how thick the glass was on the screen until I picked up the cubes and spun around to take in the apocalyptic scene around me in which so many relics lay in ruin.

While Steve headed into the woods at the backside of the gravel pit, I picked up and examined different types of glass. There was lots of green glass, and I made a plan to come back with a bucket to collect it for an art project that would never come to fruition.

“How do you hunt for rabbits?” I had asked Steve. At the time, I thought his answers to my hunting questions were very meditative. Like the Zen monk whose brief response indicates an eternal truth, Steve’s answers often left me in awe.

I did not want to sound ungrateful for wisdom beyond my understanding, but I needed him to be a bit more specific.

As we searched for rabbits, he told me not to look for the whole rabbit but to look for ears and eyes. It was a piece of advice I needed as my eyes scanned the ground for an object that would fit within the shape of a wildlife crossing sign.

When I looked for ears and eyes, my level of attention shifted. Instead of searching for a concept, I was alert to signs of life — a bit of fur against the smooth surface of the snow, a glinty black orb, a movement not caused by wind.

I saw a snowshoe hare sitting upright at the base of a tree. He was perfectly still, and I blinked a few times to assure myself that he was there.

I had never shot a rabbit before, and Steve was at my side. We whispered, and I made too much noise mounting my gun — a .22 rifle. The hare didn’t move, and I held steady right above its heart.

We all live and die. Humans might search for the meaning of life, but that is not why we kill animals or post hunting photos.

The rabbit had fleas, but I didn’t mind picking it up with my bare hands. I followed Steve’s lead on the subject of donning gloves — while it may provide a level of protection, it results in detachment.

Steve had a small camera and snapped a photo of me holding up my first rabbit by the feet. For several years, these were the types of photos I shared. I held ducks, grouse and rabbits out to the side and by the feet. And I smiled because I was very happy.

In later years, I began to hold small game by the body and close to me. It was a reflection of how hunting changed for me over time.

Photos of happy hunters and dead animals, once a part of a private album, now often spark public controversy on social media. Those who make their livelihood or recognize the greater good of the conservation model that depends on hunting, shooting and fishing, fear that controversy.

Some hunting groups have written ethical guidelines for posting on social media or take a position of support for every legal hunt, no matter how disturbing the images are to regular folks. Either extreme does little to help the conversation, which may be far more fascinating if we allowed ourselves to have it instead of comment from the far sides of narrow margins.

My rabbit photo does not show the gravel pit nearby that had tracks from a young moose on the run through a gantlet of shattered television glass and torched and twisted metal. If it did, it might make a statement about shooters and hunters as slobs, including me.

Steve spent the next summer raking gravel and removing more than 30 truckloads of garbage from those gravel pits. I was little help as I filled up buckets of beer glass that are still in my garage, but others stopped to help. And an oil company whose trucks used the road offered to haul off the bags we filled.

A hunting photo captures a point in a story with intimations far beyond the few details in a square box. A lot is wrong with the way hunting is portrayed in the media today, but the activity still makes some of us better human beings. You might catch us at different phases in the process. We might catch ourselves.

I sometimes wonder if hunters would be better off not sharing at all, but then I scroll and see my young nephew, proud of a grouse he shot, holding it away from his body and by the feet.

And I think if everyone had that experience, maybe more people would connect with wholesome food and the joy of living and not be content to eat processed chicken meat, fried and flash-frozen without any proof it ever lived.