A cocked and locked Colt .45 spurs conversation and education at a shooting range 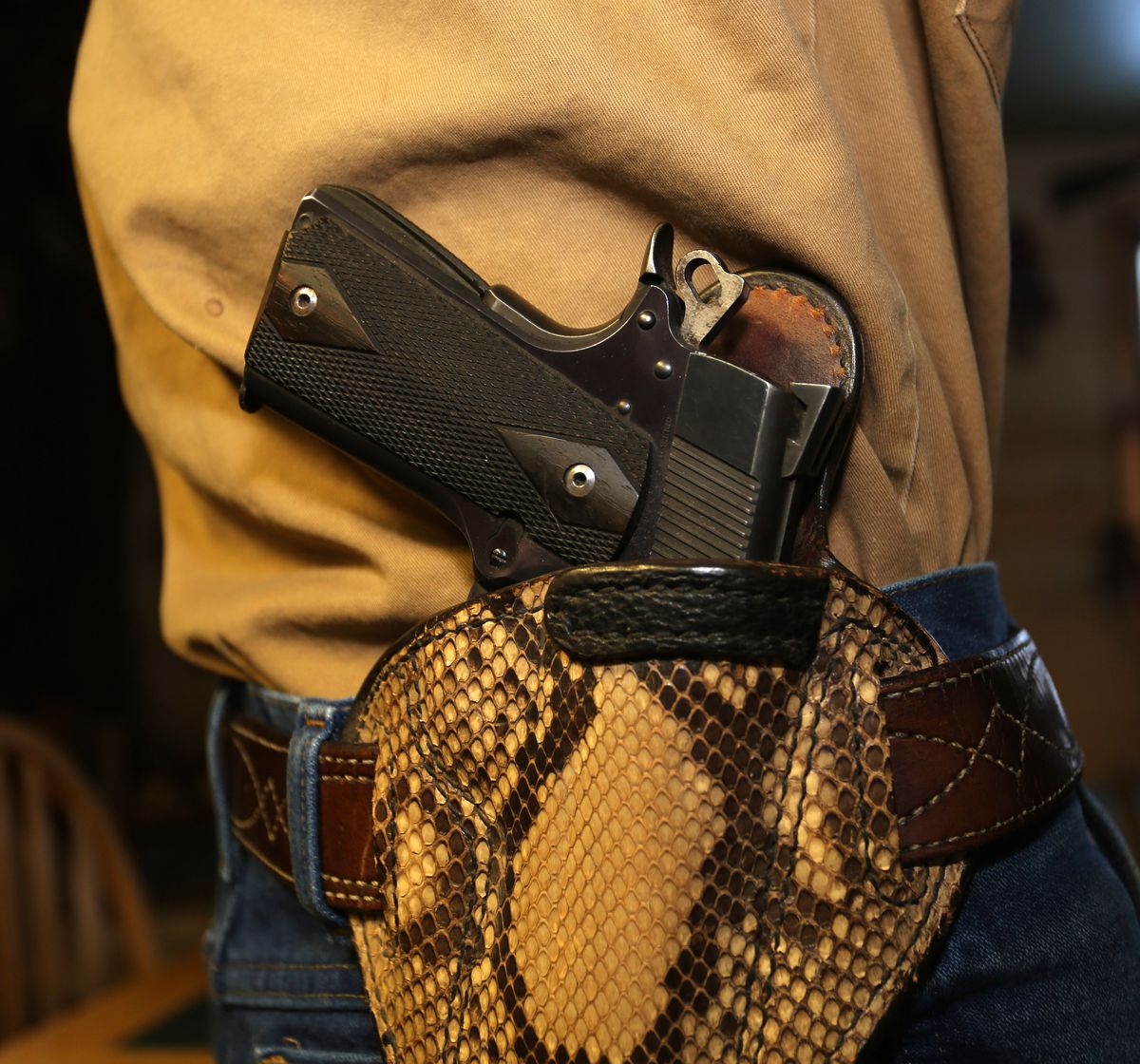 A “cocked and locked” Colt may be concerning to those not familiar with the workings of the pistol. (Photo by Steve Meyer)

A “cocked and locked” Colt may be concerning to those not familiar with the workings of the pistol. (Photo by Steve Meyer)

There seemed an urgency in the footsteps coming from behind me on the concrete walkway of the pistol range. Reaching the firing line, I heard, “Hey, the hammer on your pistol is cocked.”

The fellow, the only occupant of the range besides me, had seen my Colt .45 in its holster as we were walking back from hanging our respective targets.

“Well, that seems dangerous,” he said.

The man seemed genuinely concerned, and I had no wish to perpetuate the perception that gun folks are irresponsible, particularly on a range where safety is tantamount to future success and when a fellow shooter was concerned.

I scooted up on the picnic table that served as a catch-all for shooting gear and thought for a moment. “Do you hunt?” I asked.

A bit perplexed by the question, he replied, “Yes, I hunt a lot.”

“Ever hunt birds behind a flushing dog?”

Oh yeah, that derailed him, and like every hunting dog owner I’ve ever known, when given permission, he forgot about my pistol while he told me about his fabulous Springer spaniel.

“What shotgun do you use?” I asked.

Another talking point that hunters will rise to, and he described the 20-gauge over/under that was the “sweetest little shotgun ever.” As luck would have it, the gun he described uses lock works that mirrored the over/under I had with me, which I planned to shoot a few clay pigeons with later.

“So, it doesn’t bother you to walk behind your dog with the hammers cocked on your shotgun?” I asked.

I smiled. “I know you came here to shoot your pistol," I said, "but I would like to show you something that might help you understand the cocked pistol in my holster. It’ll take me a bit to set it up, and by the time you are done shooting, if you’ll bear with me, I’ll show you.”

He agreed and went off to shoot the semi-auto .22 pistol he carried in a belt holster. His pistol would have worked to show him what I wanted him to see, but I figured having the crazy guy with the cocked .45 take his gun apart on the range might cause more undue stress.

I uncased the over/under in my truck and dug out the gunsmithing tools that are part of the gear that accompanies me to the range. Shooting is like about everything else, things break and you want to be able to fix them on the spot if you can.

Removing the buttstock and the false side plates that revealed the lock work — the parts and pieces that control the firing of the gun — didn’t take long. While I waited for the man to finish shooting, I thought about guns and how they parallel the turn that has been taken with our vehicles these days.

The times of having vehicle trouble and fixing it yourself because you didn’t have much choice lent a deeper understanding of the workings of the vehicle. It was the same with guns many years ago. If your gun broke and you needed it, you better know how to fix it or it was not getting fixed. A broken part might mean using a file and a chunk of whatever steel you could scrounge to make a new one. So, you had an intimate relationship with how the gun worked.

Now, I am not that old, but I am hopelessly drawn to the era of self-sufficiency and have, on occasion, made parts for guns. Just to prove to myself I could.

Folks don’t do that much anymore and are discouraged from doing anything to their firearms, particularly anything that involves dis-assembly. Though sad, it is probably best that way, given all the possibilities when a firearm is not put together quite right. But it does minimize the average shooter’s understanding of the workings of the gun.

While waiting, I watched my new friend shoot his .22. He would load a magazine, charge the pistol, shoot a few rounds, holster it and walk up to check his target. Then he would come back to the firing line and draw the pistol and shoot a few more. He was not removing the round from the chamber as he walked to check his target — fuel for the teaching moment about to commence.

When he finished, he put his gun away and came over to the table where I had the over/under.

“All right, he said,” show me what you wanted to show me.”

I held up the receiver — I had removed the barrel assembly — and said, “Remember you told me your shotgun didn’t have hammers? Look at these two blocks of steel.”

He looked closely. “Now watch,” I said, and I pressed the trigger.

“That,” I replied, “would place you in the majority. Now you know. And by the way, the .22 you were shooting has a similar mechanism housed inside the frame, out of sight, out of mind.”

That’s why you cannot allow safeties, mechanical intricacies or perceptions to influence proper gun handling. Mechanical objects may fail, and if you follow the principles of safe gun handling and that happens, no one gets hurt.

After the man left with a better understanding of the working of firearms, I thought about how I wish everyone would be forthright when they have concerns about guns. Just ask. You’ll probably get an answer, and then some.