Whether you choose cheap or fancy, the shotgun that fits and feels right is the one you will love 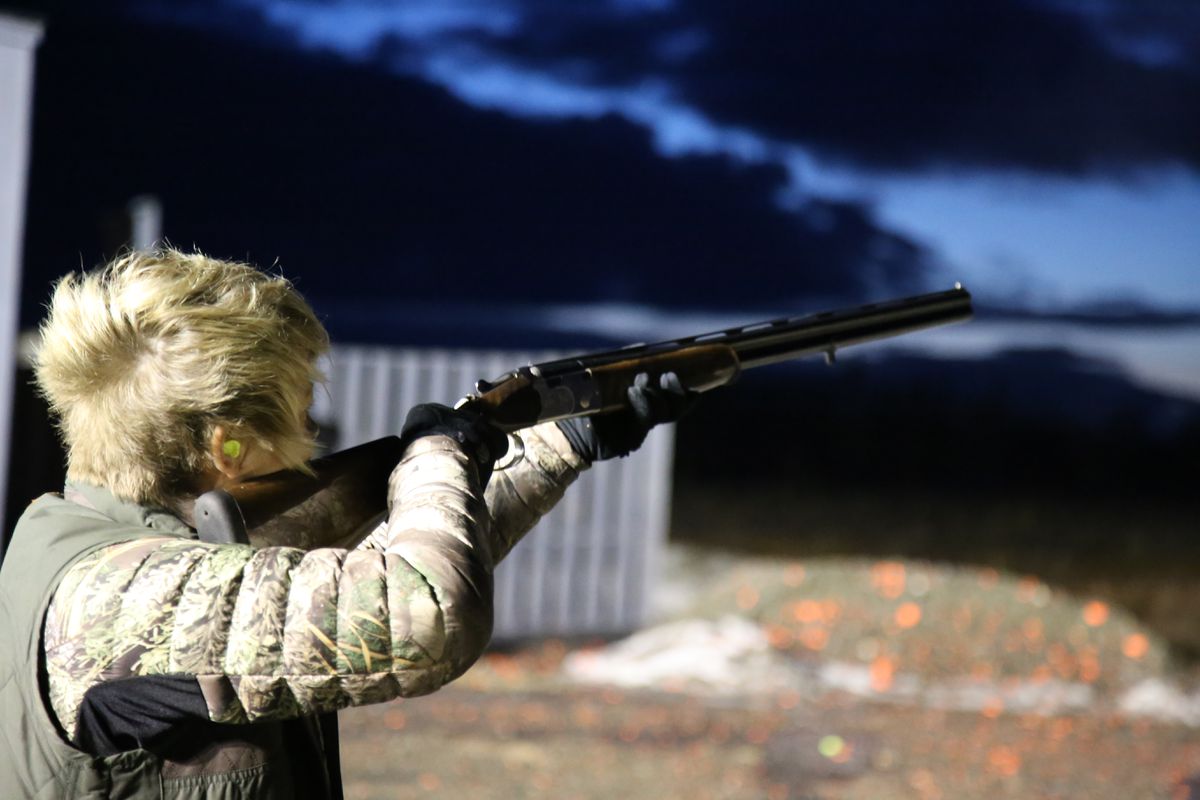 Christine Cunningham shoots skeet at the Snowshoe Gun Club with a 28-gauge Beretta, an over/under. (Photo by Steve Meyer)

Christine Cunningham shoots skeet at the Snowshoe Gun Club with a 28-gauge Beretta, an over/under. (Photo by Steve Meyer)

My first day of amateur trapshooting was as an adult at the Snowshoe Gun Club on the Kenai Peninsula. That day, I shot a blocky shotgun belonging to another club member. The single-shot BT-99 felt heavier and less sophisticated than the slim 20-gauge I had learned to shoot for duck hunting.

“Why does it have a square forend?” I asked.

In my limited experience, shooting only two different shotguns in 12- and 20-gauge, I had not yet seen a front section on a gun shaped like a platypus bill. It struck me as being like a square-toed shoe. I didn’t understand the look of a flipper on footwear or a firearm.

Perhaps like the square-toed shoe, the beavertail forend, as it is called, had a purpose, and it wasn’t in case you ever needed to use your shotgun as a paddle.

I was told the wider forend provides a solid platform and protects the fingers from burning on barrels that become over-heated with repeated use.

I had yet to suffer from that problem while freezing in a duck blind, waiting hour after hour for a single flock to appear.

The nine-pound gun was too heavy and too long in the stock for me, but I shot it well. In those early days, that was all it took for me to fall in love with a gun. When I saw a plain version of one on sale, I bought it. Steve cut the stock to fit me, and the BT-99 was my go-to trap gun for the next few years of Sunday trap.

On those days, I listened to old trap boys and attempted to glean shotgun-ology by osmosis. One of them gave me two years' worth of a shotgun shooting magazine, and I read every issue from cover to cover. I toiled not to embarrass myself on Sunday shoots.

Then one day, mid-winter, a group of shotgunners stood around the clubhouse stove while one pipe-smoking member extolled the virtues of a particular gun so modified it looked like an artificial limb. I shook my head and said, “I would never shoot a gun like that.”

I won’t say I started drinking whiskey and smoking a pipe after that, and it was awkward to defend my first newly-formed judgment. The fact was I had an opinion and, after I voiced the first one, others followed.

I liked the classic look of over/under shotguns with wood stocks. I liked case-hardening on the receiver — it reminded me of the gill plate on a rainbow trout. I didn’t care for too much fancy engraving. I thought it made sense to take a 12-gauge waterfowling and a 28-gauge for upland game or early season teal but a bit misguided to take a .410 anywhere.

I inspected everyone’s choices as if they were character traits — guns, chokes, loads. My opinion-forming grew at the rate of a child’s ego. Soon I would be ready to open up my own gun shop.

Luckily for me, I checked myself before it went too far. There is more truth to be found in the few things that matter in choosing a gun than the wide variety of opinions found on the subject.

One of the most compelling arguments against my taste in guns is a viral video on YouTube called "Hiliarious Georgia Boy Kills A Goose.” In it, he states, “You always need to shoot a cheap gun.”

Nothing recommends a gun like success, and a boy with a banded goose in hand is master of his universe.

Some friends shoot automatic shotguns and have three shots to my two with an over/under. They care about spending time in the blind and bringing home birds, which they turn into jalapeno cheese sausages that last them the winter.

To them, my “fancy” shotgun looks like I have my priorities all wrong.

But when they invited a new female duck hunter in the blind for her first hunt, one of them asked what gun I shot first — 12- or 20-gauge.

I don’t know if they were looking for my opinion or not, but I wanted to help. Unsolicited advice is a curse of those of us who love guns, and I tried to set aside my acquired preferences.

One of the most important things is that the gun has as few obstacles to overcome as possible. If it’s too heavy to shoot more than a few times, too difficult to load or too prone to recoil, it’s not likely to get used.

It’s unfortunate to see someone interested in shooting show up with a clunker of a gun, fight to overcome its shortcomings and grow tired and frustrated.

For most beginners, the type of gun and gauge doesn’t matter as much as how heavy it is, if it fits right, and what loads are used — the lighter the better, to start. Most of us who are shorter in stature benefit from having the stock cut.

It helps if someone other than a partner can teach basic tips — the most important one for me was learning to place the buttstock in the crook of my shoulder to avoid a “blue whistler” bruise on my forearm.

The second was learning not to move my head when mounting the gun. And my favorite was one I read in a shooting magazine: “See the target, shoot the target,” which to me meant to look where I was shooting instead of at the end of my barrel.

I loved my single barrel BT-99 and its beavertail forend for trap shooting, but it was not a gun suited to hunting. I doubt I would have built the right muscles and shooting habits if it weren’t for a year of practice at the range with that old trap gun.

The thing is, once you start making memories with a gun, the quirks that might derail a beginner will fade. It doesn’t mean you should start with the wrong shotgun if you can help it, but it does mean, if you’re lucky, that first gun will be one of many stories to share.

And if you’re like me, you might want to pull it from the back of the gun safe and take it to the range for a shoot on Sunday.