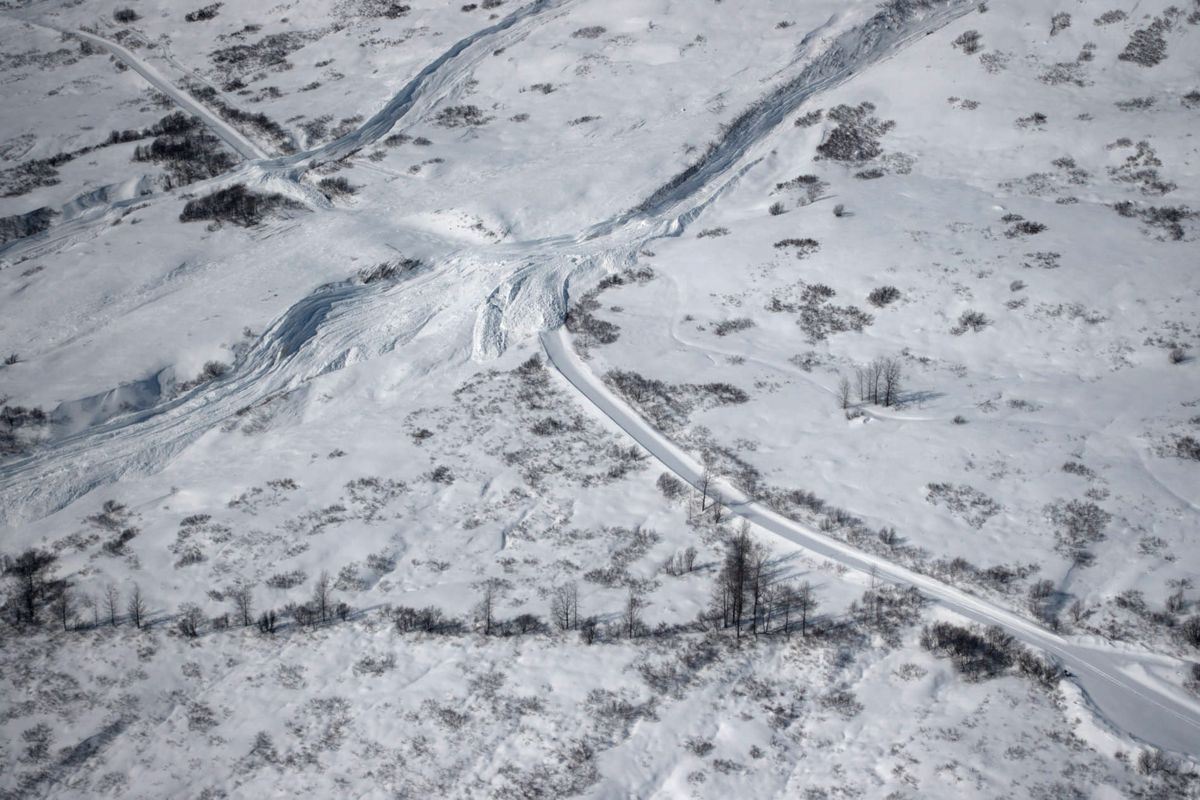 A major storm brought a lot of snow and wind to the Hatcher Pass area April 4, 2021. Marmot gully 2 with debris covering the road in 2 of 5 locations and travelling well past the road run. (Photo credit Hatcher Pass Avalanche Center)

A major storm brought a lot of snow and wind to the Hatcher Pass area April 4, 2021. Marmot gully 2 with debris covering the road in 2 of 5 locations and travelling well past the road run. (Photo credit Hatcher Pass Avalanche Center)

Debris from a series of avalanches that roared across Hatcher Pass Road over the weekend likely won’t be cleared until at least early next week, officials say.

Alaska Department of Transportation spokeswoman Shannon McCarthy said there has not been an avalanche closure in the area this extreme for about 40 years.

Five natural avalanches occurred Sunday on Marmot Mountain near Mile 10 of Hatcher Pass Road. The transportation department first closed the road Saturday night, McCarthy said. Debris from one of the avalanches crossed the upper and lower portion of the road and covered the Archangel trail, the Hatcher Pass Avalanche Center reported.

The area in the Talkeetna Mountains about a 90-minute drive north of Anchorage is popular with skiers, snowboarders and snowmachiners.

Keen interest in what we are dealing with in #HatcherPass? This is drone footage showing some slide paths. The multiple avalanches cover about 2,400’ of road with about 6' of debris. Once our Avalanche Specialists give the all clear, it will take about 3 days to clear. pic.twitter.com/e4tvxNP3se

It’s unclear when Hatcher Pass Road can be reopened — McCarthy said the two avalanche specialists in the Department of Transportation will monitor conditions, but Friday is the earliest it may be safe for road-clearing crews to start working.

“Once we are given the OK, then we have to have safety protocols in place for our people,” McCarthy said. “That means they have to have beacons in their vehicle with them, they have emergency food and water just in case they get caught in an avalanche.”

McCarthy estimates it will take three days for crews to remove avalanche debris up to 6 feet deep and spread over about 2,400 feet of roadway. Regular snowplows will not be enough to clear the debris, and McCarthy said the department will utilize a loader because of the large amount of snow and because it is so compact.

“The road is fairly narrow in some areas — two lanes with a guardrail on one side, so it’s not an easy job,” she said.

Hatcher Pass Road has avalanche closures about every other year, McCarthy said. But the closures are rarely below Mile 14, she said.

The transportation department does frequent avalanche mitigation work by triggering avalanches to prevent natural slides, which are often bigger and unpredictable, McCarthy said. But mitigation on Hatcher Pass Road is challenging, so crews had not triggered any slides this season. McCarthy said mitigation in the area has to be done with a helicopter and is complicated by the area’s topography and the large number of people often in the area.

Hatcher Pass Road was closed for several days last week due to avalanche risk between Mile 14 and Independence Mine as a storm dropped more than a foot of new snow in the area.

The weekend avalanches were mainly wind or storm slab releases, according to a report from the Hatcher Pass Avalanche Center. Conditions on Sunday were considered dangerous and an avalanche warning was issued through Monday.

“Several human triggered avalanches were reported on Thursday and Friday, large enough to bury, injure, or kill a person,” the report said.

An avalanche closed the Seward Highway last week and there has been one fatality due to an avalanche and several near misses in Southcentral Alaska during recent weeks.

A heli-skier died March 27 when she was buried in an avalanche near Matanuska Glacier.

On Friday, two skiers were carried by a deep slab avalanche on the north face of Mount Gordon Lyons near the Arctic Valley ski area. One skier deployed his avalanche bag and remained above the debris, but the other skier was partially buried, with his or her head and arm above the debris, a report from the Chugach National Forest Avalanche Information Center said.

On March 29, 4 to 6 feet of avalanche debris covered a 200-foot stretch of the Seward Highway at Mile 45 near Summit Lake. An avalanche had not hit that area in about 10 years, McCarthy said.

Avalanche specialists from the transportation department are continuing to monitor for high-risk areas along roadways, McCarthy said. Aside from Hatcher Pass Road, McCarthy said increased danger remains along the Seward Highway, especially near Summit Lake.

The transportation department lists road closures on its online traffic map, and avalanche information is available from the Chugach National Forest and Hatcher Pass avalanche centers.