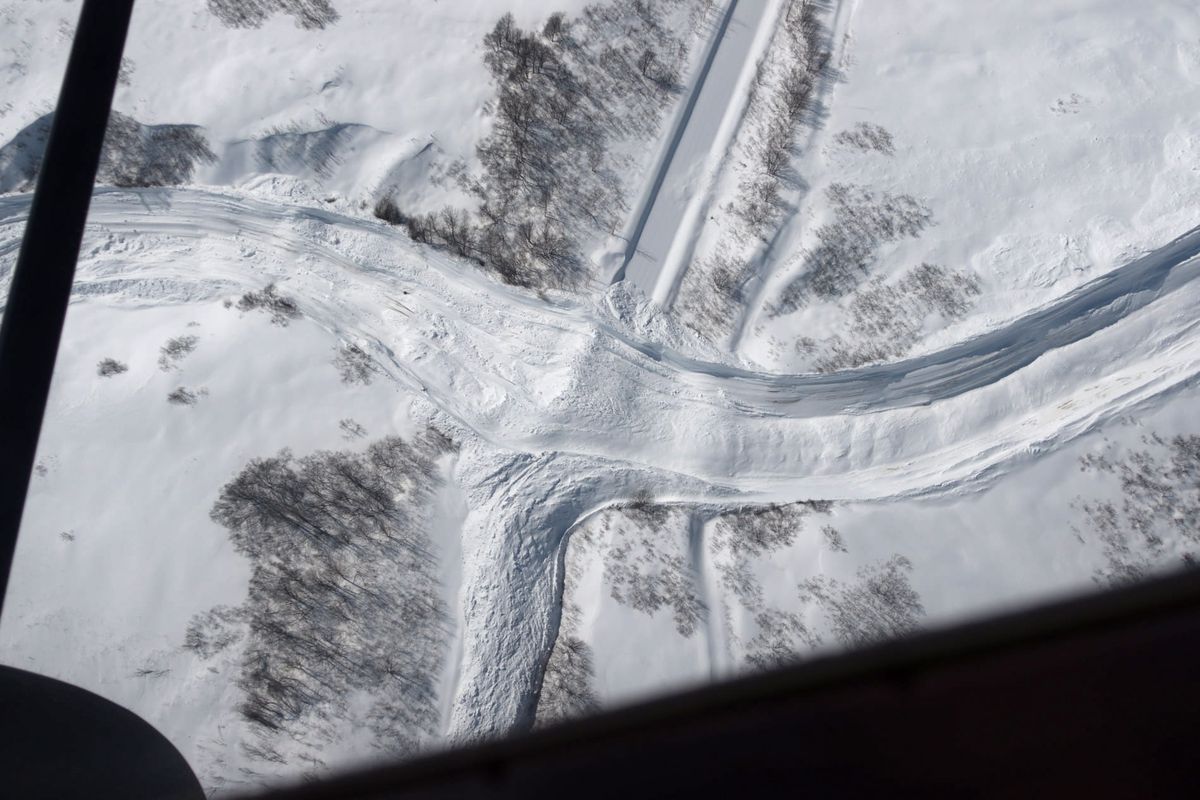 A major storm brought a lot of snow and wind to the Hatcher Pass area April 4, 2021. Many avalanches resulted. Marmot avalanche on Easter covered the road and beyond. (Photo credit Hatcher Pass Avalanche Center)

A major storm brought a lot of snow and wind to the Hatcher Pass area April 4, 2021. Many avalanches resulted. Marmot avalanche on Easter covered the road and beyond. (Photo credit Hatcher Pass Avalanche Center)

Officials on Monday said it could take until the weekend for debris to be cleared from the Hatcher Pass Road area so that the road can reopen after a series of avalanches closed it on Easter.

The five avalanches covered about a 2,400-foot stretch of the road with roughly 6 feet of debris. Shannon McCarthy, a spokeswoman for the Alaska Department of Transportation, said there has not been an avalanche closure in the area this extreme since the 1980s.

DOT&PF Avalanche Specialists are preparing avalanche mitigation measures for #HatcherPass this week in order to allow...

The road first closed on April 3 as avalanche danger heightened. On April 4, five natural avalanches were triggered on Marmot Mountain. The road closed near Mile 10.

Avalanche mitigation in Hatcher Pass is normally complicated by the many backcountry recreators who visit the area for skiing, snowboarding and snowmachining. McCarthy said the road closures mean that people have not been able to access the area, which makes it less risky for mitigation.

The transportation department plans to use a helicopter to drop explosives in several areas to trigger any additional avalanches on Thursday or Friday as long as the weather permits, McCarthy said. The department hopes to trigger any remaining loose snow, but McCarthy said they are not anticipating any other large sections to slide.

Once any debris from the mitigation settles, McCarthy said crews will be able to begin clearing the roadway immediately. Equipment is being staged in the area early this week.

If everything goes as planned, McCarthy said the road will reopen by late Saturday or early Sunday.

Avalanche specialists with the transportation department monitored the area throughout last week to see if it would be safe for operators to begin clearing the area. McCarthy said operators will be equipped with avalanche beacons and survival gear.

“In order for us to clear debris, there needs to be a significant measure of safety, just because when you put someone in a large piece of equipment that’s by many things and moving snow around, it is a riskier thing than than just walking past the area,” she said.

The transportation department was also doing avalanche mitigation on about 9 miles of the Seward Highway north of Girdwood on Monday. Strong winds, new snowfall and rising temperatures during the last several days have caused dangerous avalanche conditions in the area.