Summertime brings the fine and pleasant misery of camping, and thoughts of making it more pleasant 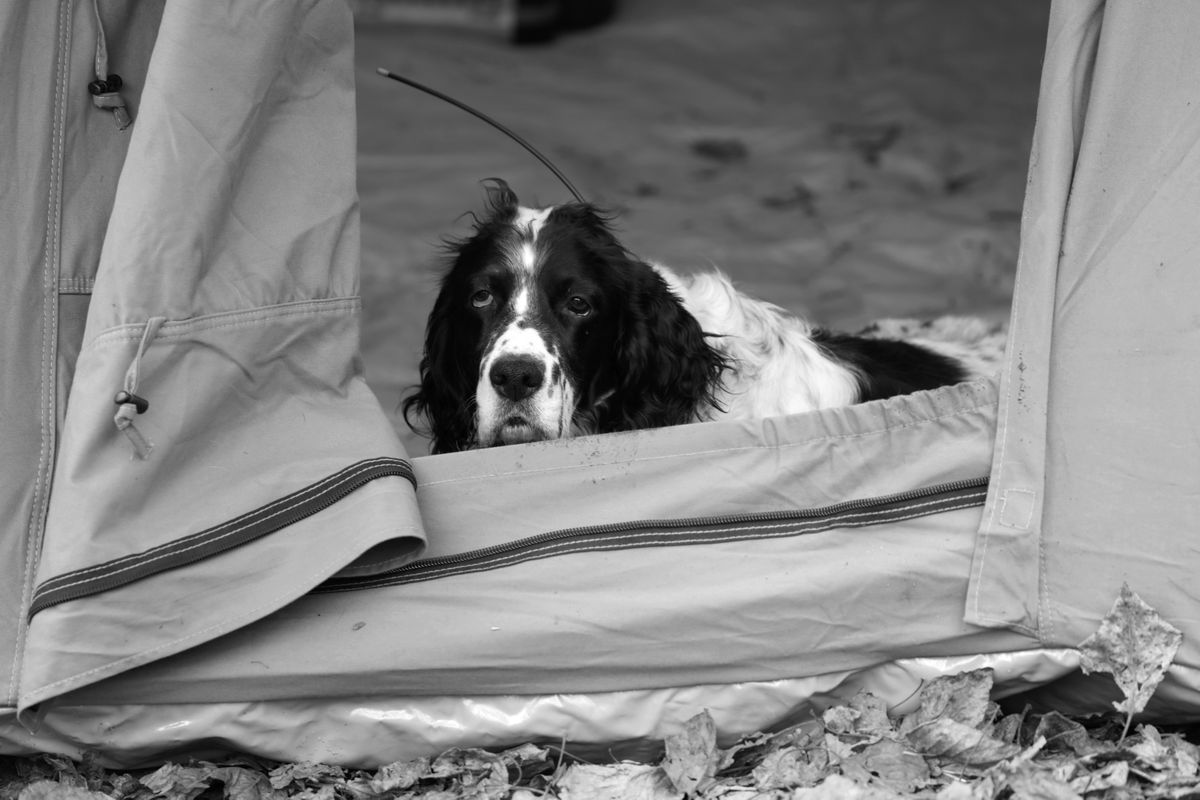 “Do you think maybe we should talk about that conversion van thing?” Christine wondered between bursts of laughter as she watched Colt and Rigby do their best to ensure the tent would not be set up before the rain started.

Colt, one of our English setters, is a veteran camper and seems to always get the nod for the first campout of the year. Rigby, the chocolate Labrador who stormed into our lives six months ago, lacked any experience setting up tents. Colt, ever willing to help, showed Rigby how to stretch out to maximum length on the canvas as soon as the tent was unfolded on the freshly prepared square of ground.

Christine sat in a camp chair, grinning while I attempted to coax the two boys off the tent. About the time both would get up and move, one would run back and plop down again.

“Hey, does this count as misery?” Christine said.

Camping started ruining my life around age 8, about the time I started reading outdoor adventure stories. I longed for tsetse flies to keep at bay with my Mopane wood campfire in the African bushveld.

An active imagination kept the misery of sleeping in a hastily constructed lean-to and the shame of building it within spitting distance of the back door at bay while breaking into the life of the self-sufficient outdoorsman.

It wasn’t until I was 12, during the summer of 1972, my second year in Alaska, that I had the opportunity for “real” wilderness camping. I had killed my first black bear early in the spring while hunting with my dad. Being a bit of a bloodthirsty young boy, I wanted to get another one.

But I wanted to do it on my own, from the camp patterned after the Selous/Bell stories that filled my young mind.

Lacking porters to carry my camp, I downsized what had fed my imagination and strapped a cheap pup tent, a chicken-feather sleeping bag, a fry pan and a bag full of greasy protein to a military surplus plywood pack frame.

I strapped on the loaded pack, slung my .300 and told my mom I would be bear hunting for a couple of days. If memory serves me, she said it would be good if I didn’t shoot myself.

There weren’t many homes around in those days, so I started down an old seismic trail and followed it for a while until coming upon a game trail headed west. West always seemed the best direction to me, and I followed it to a small lake whose banks were brush-choked and offered no camping spot.

A hill a couple hundred yards above the lake seemed a good option. There were no tsetse flies or roaring lions, but the mosquito hordes and recently expelled piles of black bear poop satisfied my lust for adventure.

That night, sitting by the small campfire, listening and watching, I could not have predicted the irony that wouldn’t be revealed for 37 years.

When Christine and I decided we might tolerate one another in cohabitation, we sort of stumbled onto the place that would become our home. After about a year I realized the hill our house sits on is where I spent my first night camping by myself in Alaska.

In those days, Alaska wasn’t exactly mainstream. The TV shows we watched came three weeks after they aired in the Lower 48. Mail took weeks to make the journey. So it wasn’t until about 10 years after Patrick McManus, America’s beloved outdoor humorist, published “A Fine and Pleasant Misery,” that I read it.

The first story in the book is entitled “A Fine and Pleasant Misery,” and when I read it, I laughed out loud and, thanks to my early camping years, identified with it.

McManus reminded me of that first Alaska camping trip when he said, “You prolonged the enjoyment of your trip by telling all of your friends how miserable you had been. The more you talked about the miseries of life in the woods, the more you wanted to get back out there and start suffering again. Camping was a fine and pleasant misery.”

Christine hadn’t done much camping before we started our journey, and I must confess, I had ample opportunities to amuse myself at her expense. I told her about touching the inside of the tent roof with a finger and causing it to leak in that spot and then watched, knowing she couldn’t resist the bad behavior (it doesn’t really work).

No matter how many bites of food had insects in them, I convinced her that was part of the camping experience.

I had such a great time reliving the way it goes for campers. One starts with small tents that weigh a ton, leak and are stored the same way sausage is forced into its casing. The entire camping evolution for folks is designed around the commerce of getting better equipment.

We took that to task and eventually got a camper trailer, which turned out to be very comfortable and too intrusive for our outdoor life. My favorite memory of that trailer is Winchester sitting in the middle of its low table, criticizing my card-playing ability as Christine relentlessly beat me.

When we decided on the large, comfortable, canvas tent we use now, I thought we were done.

Maybe not. While really comfortable for a tent, it is heavy, a fair amount of work to set up and maybe not worth the effort for our typical one-night trips.

That’s where the thought of getting a conversion van came from. The lure of being able to park just about anywhere and, with a minimal amount of fuss, start camping, is strong.

But wherever the journey takes us and however it gets done, the goal remains the same as always: Being somewhere sans the responsibilities and distractions, at least for the most part, of the everyday world. An escape, if you will. And always, a fine and pleasant misery.