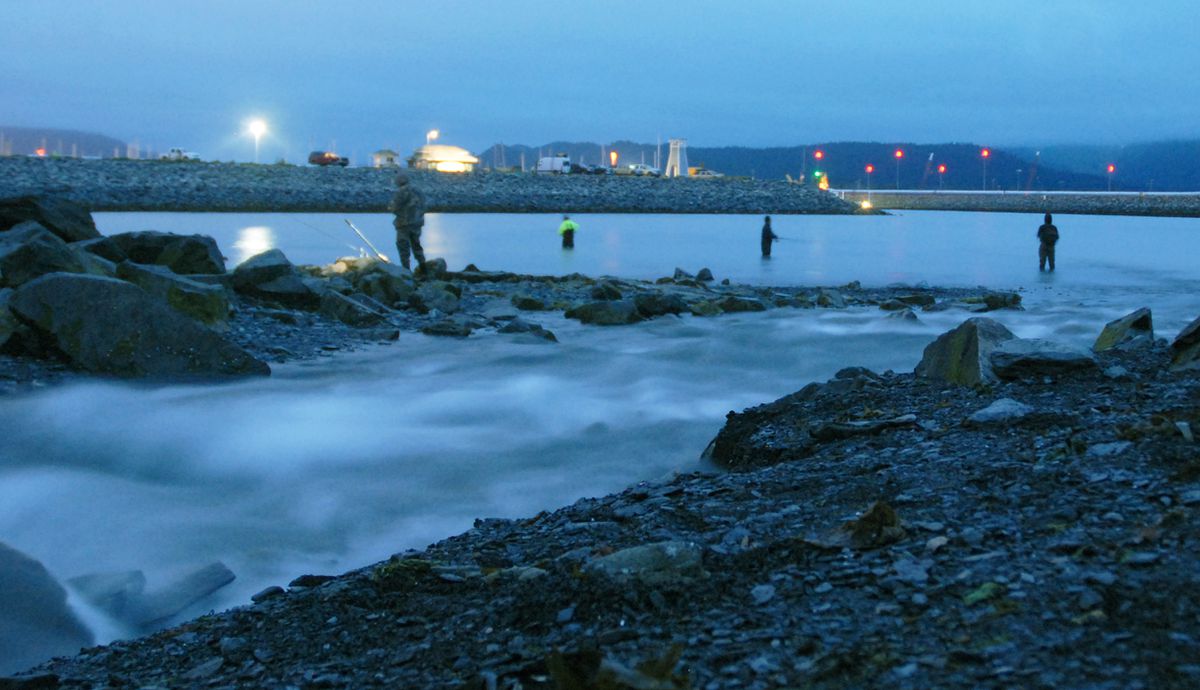 SEWARD — It’s midnight, and Seward is getting sleepy. Orange campfire embers smolder along the flat black water of Resurrection Bay as the last bits of midsummer twilight fade from the sky.

A group of men sit near a motorhome speaking Filipino as “No Touch” by the Juan Dela Cruz Band drifts down the rocky beach like campfire smoke. A dozen fishermen stand in the water nearby, their headlamps cutting through the night as they cast comically oversized treble hooks into the black before retrieving them violently in hopes of blindly gouging the belly or back of a big chinook.

“Fish on!” someone shouts, and now everyone is wide awake.

The fish are in

Seward has always been a first-choice destination for Alaska anglers, who flock to the seaside city of 3,000 each summer for its easy access to the bay and its world-class marine fisheries. Although many people use boats to get onto the bay and beyond, the town’s snaking shoreline provides virtually anyone a chance to snag a salmon -- literally.

The practice of snagging -- defined as hooking a fish anywhere besides its mouth -- might seem unsporting to someone unfamiliar with the practice, but in many ways it’s a uniquely Alaskan technique. Using stout rods, big reels and heavy line, anglers rip massive weighted treble hooks (the largest resemble miniature grappling hooks) through the water as hard and as fast as possible.

The idea is to hook a passing fish anywhere in its body before dragging it to shore. It’s 100 percent illegal in fresh water, but in salt water it’s perfectly legal and pretty much the only way to go.

After a four-minute fight, Anchorage’s Kao Thao has landed a 15-pound chinook (also known as king) salmon by dragging it in backward onto the rocks. Thao gives the fish a sharp whack on the head with a small club and smiles.

“This one fought hard, man,” he says.

Although he was the only person on the shore with a fish, Thao said he didn’t have much wisdom to share about how he caught the fish.

“There’s no technique,” he said with a laugh.

Fishing has been excellent this summer from Seward beaches thanks to strong returns of mostly hatchery-raised chinook and sockeye (red) salmon. The kings started showing up in May, with the reds hitting the beaches in good numbers at the start of June. The fish arrive in Resurrection Bay and school up, gathering in large numbers near the mouths of creeks and rivers.

Because of its proximity to the water, Seward provides almost limitless places to try to snag a salmon. The most popular areas are near the small-boat harbor and at the outlet of the Seward Lagoon near the main city campground; near the Lowell Creek waterfall; at Lowell Point State Recreation Area; at the mouth of the Resurrection River; and near the Spring Creek Campground at Fourth of July Creek. Although these are the most popular places, anywhere along the shoreline is a potential hotspot.

“This past three to five days people have been doing really well,” he said last week from the department’s Anchorage headquarters.

Night deepens, and calm settles over the water near the city campground. It’s been more than an hour since Thao caught his king, and as the tide rises anglers begin to cluster nearer the lagoon outflow, where fish can sometimes be seen nosing up the shallow creek.

A group of friends from Joint Base Elmendorf-Richardson have arrived and are slapping the water with their hooks, snapping headlamps on and off to try to catch a glimpse of a fin or tail. A small girl with the party sits on the seawall staring into the screen of an iPhone while her parents fish nearby. Her name is Ashley, and after an hour or so her thoughts have drifted to sweeter pursuits.

“I’m getting tired and hungry for marshmallows,” Ashley says to her father.

Two locals ride up on BMX bicycles. They stand surveying the scene for a while, then walk down near the shoreline to settle in. The woman eats from a foam container and chats with the little girl sitting on the seawall. They start to fish, using a more exaggerated snagging technique than the others -- their practiced jerks are longer and their rod tips held lower to the water. After a while, the woman walks up to the bridge to watch.

Her name is Charlotte Davenport, and she’s been snagging salmon since she was about Ashley’s age.

“Every year all summer, I’m always down here fishing,” she says.

Davenport said there’s really no secret to catching fish in Seward. All it takes is patience.

“Fishing’s fishing,” she says. “It’s just being dedicated and not giving up.”

Although the incoming high tide is generally considered the best time to fish, Davenport said low water can be productive because the fish have less room to move around.

Davenport said fishing from the beach is usually good through September. Kings are the first to arrive, followed by reds and then cohos (silvers) in fall. The beach fisheries are “usually pretty chill” she says, although occasionally there are conflicts -- typically when someone shows up drunk.

“It’s a good community where the fishermen can get along,” she says.

Most people wear rubber boots or even chest waders to get out into the water, but Davenport said that’s not necessary. She rarely if ever wears boots.

“I’m usually out there in my flip-flops, shorts or a dress slaying ‘em,” she says. “People look at me like, ‘[She’s] crazy, she’s definitely from here.' "

Across Resurrection Bay, all the campfires have all gone out at Spring Creek Campground as dawn approaches. Hundreds of cars and motorhomes fill the gravel pad near the end of Nash Road, where in the nearby bay several dozen people are already trying their luck.

Anchorage’s Jith Lau is one of them, and after fishing for about an hour, he’s got two sockeye salmon on the beach. Lau says the secret to hooking fish is simple.

“I just come out here when the fish are in,” he says.

Many people use store-bought snagging hooks or spinning lures; Lau said he makes his own. He said he buys a treble hook, then wraps it with about 2 ounces of bendable lead sinker. It’s cheaper than the commercially produced snagging hooks available at most large tackle shops.

“And it seems to catch fish,” he says.

Although the technique is simple, snagging works best when fish are in abundance. Some people stand along the shore watching until those in the water start hitting fish, while others watch until schools swim by.

Palmer’s Bryan Robbins says he keeps an eye on the seals and sea lions that chase the salmon around the bay.

“They’re always in front of that damn seal,” he says.

Back near the city campground, Ashley and her dad, Brian Smith, walk up to the parking lot to bring the family’s landing net back to the truck. They’re thinking about heading back to the campground for marshmallows.

“That’s really what it’s about, coming out and having some fun,” Brian Smith says.

Suddenly, a man in their group hooks a salmon and yells at Smith to get the net.

“Daddy run!” Ashley calls out as Smith bolts for the truck.

He returns a minute later and slings young Ashley over his shoulder as they head for the water.

After a while, Smith nets the fish for his friend before turning to his wide-eyed daughter.

“Well kid, we might have to stick around a little longer.”