Despite a 27-year age divide, father and son view each other as top Iditarod challenger 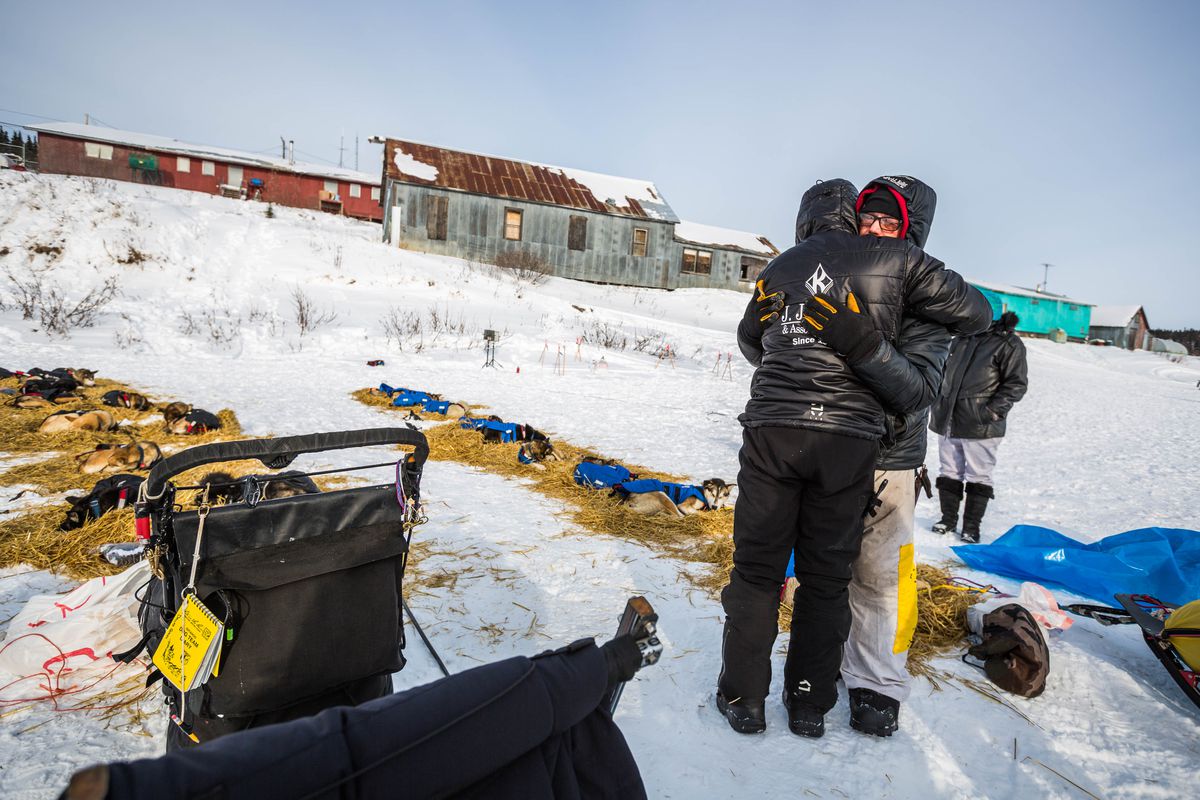 Mitch Seavey and his son Dallas don't discuss certain things when it comes to mushing.

While nearly three decades separate the two men, the Seaveys see one another as their toughest competition in the Iditarod Trail Sled Dog Race. One or the other has won the past five races, and they'll face off again in March, both eyeing a perfect race, or as close to flawless as they can get.

Dallas, who will turn 30 the day of the ceremonial start, will bring with him an already impressive resume. He is a four-time Iditarod champion, as well as the youngest musher to ever win the race, and the quickest, setting the record last year by shattering the one he previously held. But Mitch, 57, has not remained too far behind, placing second to his son in the last two Iditarods and first in 2013.

If recent history repeats itself in March, the generational divide between the two Seaveys won't mean much as they travel with their dog teams the 1,000 miles through mountain ranges, harsh terrain and fierce coastal winds to the Iditarod finish line in Nome.

It's difficult to imagine a similar father-son championship rivalry playing out in many other sports — and it's unprecedented in the Iditarod, too. Never before in the race's 44 years has a father-son tandem battled for the title; Dick and Lance Mackey both won, but decades apart.

"I will never let him win. I will flight him tooth and nail to the finish line," said Mitch, standing outside of a two-story home he rented over the winter in the sparsely populated community of Willow, located just down the street from his son, Dallas. One day, he joked, he will plant spies at Dallas' kennel.

That evening, Mitch was on his way to meet Dallas and his granddaughter Annie for dinner at one of the only nearby restaurants, crowded with neighbors and fellow mushers, about 90 miles north of Anchorage.

The father-and-son pair took playful, verbal jabs at one another over fish and chips and seafood pasta. As usual, they discussed their dog teams, as well as their mushing beginnings on the Kenai Peninsula and how they got from there to where they are today — the two Iditarod mushers to beat, each with significant sponsorship and tour businesses, among other enterprises.

"We've always been pretty close," Dallas said. "I mean, as close as you can be to someone like him."

While the Seaveys talk all the time, certain topics remain "off limits," including race strategies and training plans. They even refuse to tell one another how far they last ran their dogs.

Sure, they're family, but they're also fierce competitors.

Not always meant to mush

He started wrestling around age 11 because he couldn't keep up with his brothers when they took off with dog teams on the snowy Kenai Peninsula.

"His older brothers were mushing 10 dogs and the other brother was mushing eight dogs and Dallas was a little fart and he was running three dogs," Mitch said. "And it was like, 'Maybe we should do something else.' "

"Yeah, something I might be good at," Dallas interjected, between laughter and bites of pasta.

"So here was wrestling that —hey, you know — I've wrestled. He could wrestle, too. There's this club in town and we can do that kind of together. But I just remembered that. The irony was that you couldn't keep up," Mitch said.

"The whole wrestling thing was because you were getting swamped in the mushing world."

Mitch's history with mushing and the Iditarod runs deep, as the son of Dan Seavey Sr., who brought his family to Alaska in 1963 to teach at Seward High School and helped start the Iditarod. Dan and his sled dog team ran the inaugural 1,000 mile race in 1973, completing it in 20 days, 14 hours and 35 minutes, finishing third.

His son Mitch ran his first Iditarod nine years later, at age 22. He placed 22nd and it took him 17 days, 10 hours and 27 minutes to get to Nome. It was two years after he married his wife, Janine.

"As soon as we got married, we had sled dogs," said Janine, who moved to Anchorage from Cary, North Carolina. "I never dreamt that this is what my life would become. I was looking for adventure, but I didn't know that this was the kind of adventure that would be on my plate."

Mitch took more than a decade off from the Iditarod after his rookie run. He and Janine had four boys, Dallas was the second youngest and born in Virginia where the family moved in the late 1980s, and where Mitch co-owned a real estate development company.

The family left the state of Virginia within six years in the midst of a crash in the real estate market. They were broke and spent about a year living with Mitch's parents back in Alaska.

"We didn't even have the ability to have our own home," Mitch said. "But we started this dog sledding tour business and immediately went into racing and made a life out of it."

While living at his parents' house in the early 1990s, Mitch created a custom sled with wheels on it, so his family could launch a sled dog touring business in the summer. The family ran that business out of Seward, and had a kennel about 60 miles away in Sterling. Mitch and Janine had another son, Conway, when back in Alaska and Janine home-schooled all four boys.

She said Dallas struggled to sit still, but he was creative, often crafting three-dimensional objects out of construction paper, including a pair of moccasin boots with laces that he could tie.

For years, the family worked 110 days straight every summer at the tour business, Mitch said. They eventually hired enough staff that they could take July 4 off, going into town in Seward in a rotation so they had time to buy cotton candy and other snacks.

Mitch started racing the Iditarod again in 1995 and hasn't missed a year since.

Dallas said that watching the business grow taught him the importance of hard work, and that if you put in enough effort it's possible to achieve pretty much anything.

Meanwhile, he was also wrestling and on the fast-track to the Olympics. Mitch attended every match, both in Alaska and out of state, and after each one, the father and son analyzed Dallas' performance and discussed what he could learn, and how he could improve.

"You keep plugging away. You keep solving the next problem, and keep being persistent and you see the results from that," Dallas said. It's a mindset he has kept in his mushing career as well.

In 2003, Dallas won his 125-pound weight division at the Greco-Roman National Championships, becoming the first Alaskan to win a national wrestling title. He was already a state champion, too.

But his wrestling career ended early because of concussions — "lots of them," Dallas said.

"I had way too many concussions and that led to some physical problems as well and some communication damage between my brain and the whole right side of my body," he said. He could no longer remember his dogs' names and decided if he did ever make it to the Olympics, he wanted to remember the experience.

"I always intended to come back to mushing when my body gave out," he said. "I just thought that would be when I was 30."

But at age 18, Dallas became the youngest musher to enter the Iditarod because his birthday fell just before the race. He finished 51st behind a team of his father's young dogs in that 2005 race. His father finished third and his brother Tyrell, 16th.

He had a long way to go, but his parents said he was driven, competitive and confident.

"It was kind of nice that he had a fallback of the Iditarod to turn his attention to," Janine said. "He was very intense and very competitive and he needed something to fill the void."

Mitch described Dallas as a "believer."

As a wrestler, he always believed he could beat his competition even if, to spectators, it appeared impossible. Mitch said his son had the attitude that eventually someone had to win, so why couldn't it be him?

Dallas ran the Iditarod again in 2007 with another puppy team and placed 41st. He knew he needed his own kennel to get to the next level.

During a dog tour, he met the owner of a Wisconsin-based transportation company, J.J. Keller, and the company became his sponsor, and continues to be his sponsor about a decade later.

"It gave us enough — between that and our entire life savings — to buy a group of dogs," Dallas said. He bought most of his dogs from his father, and started his own kennel with his wife, Jennifer, whom he married in 2008.

A year later, Dallas ran another Iditarod. This time he placed sixth, shaving nearly two days from his time to be named most improved musher. Mitch placed fourth.

In the years between then and now, Dallas and Mitch both said they have continued to analyze each aspect of the race, trying to perfect it while stressing the need to innovate.

"Part of this is about just continuing to adapt and change and grow," Mitch said. "I feel like if you sit still, you get run over."

Dallas said he is trying to systematically address and improve each part of mushing. Despite winning four of the last five Iditarod races, he said he doesn't feel like he has the race down to a science.

Both Seaveys now have their own kennels of about 100 dogs and employ many handlers.

Mitch has six grandchildren, including Dallas' daughter Annie, a talkative and energetic 6-year-old who watched the movie "Beethoven" on her iPad during dinner, while discussing next year's Halloween plans with her father and grandfather.

She wanted to be a cowgirl, and wanted to dress two of her family's dogs — Oats and Candle — as her horses. Annie raced Oats in a one-dog race last year, and he will likely run the Iditarod this year.

Both Dallas and Mitch said they couldn't pinpoint how many more Iditarod races they had in them, agreeing that they would continue to race until there was another activity they enjoyed more.

Despite all of his successes as a young musher, Dallas didn't gloat or even bring up the wins on his own over dinner. On the Iditarod Trail last year, he appeared serious, pragmatic and almost robotic at each checkpoint. There's no time to waste, he pointed out.

When he won in 2016, he proclaimed, "Just another day of mushing, man." But he may not be able to say that if he's the first to Nome in March. That's because if he wins the 2017 Iditarod, he will tie Rick Swenson's record for the most race wins, but he insisted that's not his focus. He said just wants to run his best race — win or not.

"I'll keep on racing the Iditarod as long as that's the thing I want to do more than anything else, but as soon as I find myself racing for one more win or a record, I'm doing it for the wrong reasons and that's the time we need a change of scenery," he said.

Janine said that as Dallas' parent and Mitch's wife it's fulfilling to simply watch the two of them pursue their passion and share a connection. While she knows, too, that there are "off-limit" topics between the two, she said the father and son spend a lot of time talking ideas about the sport they both love.