Iditarod live blog for Saturday, March 11: Dog that died in plane may have overheated 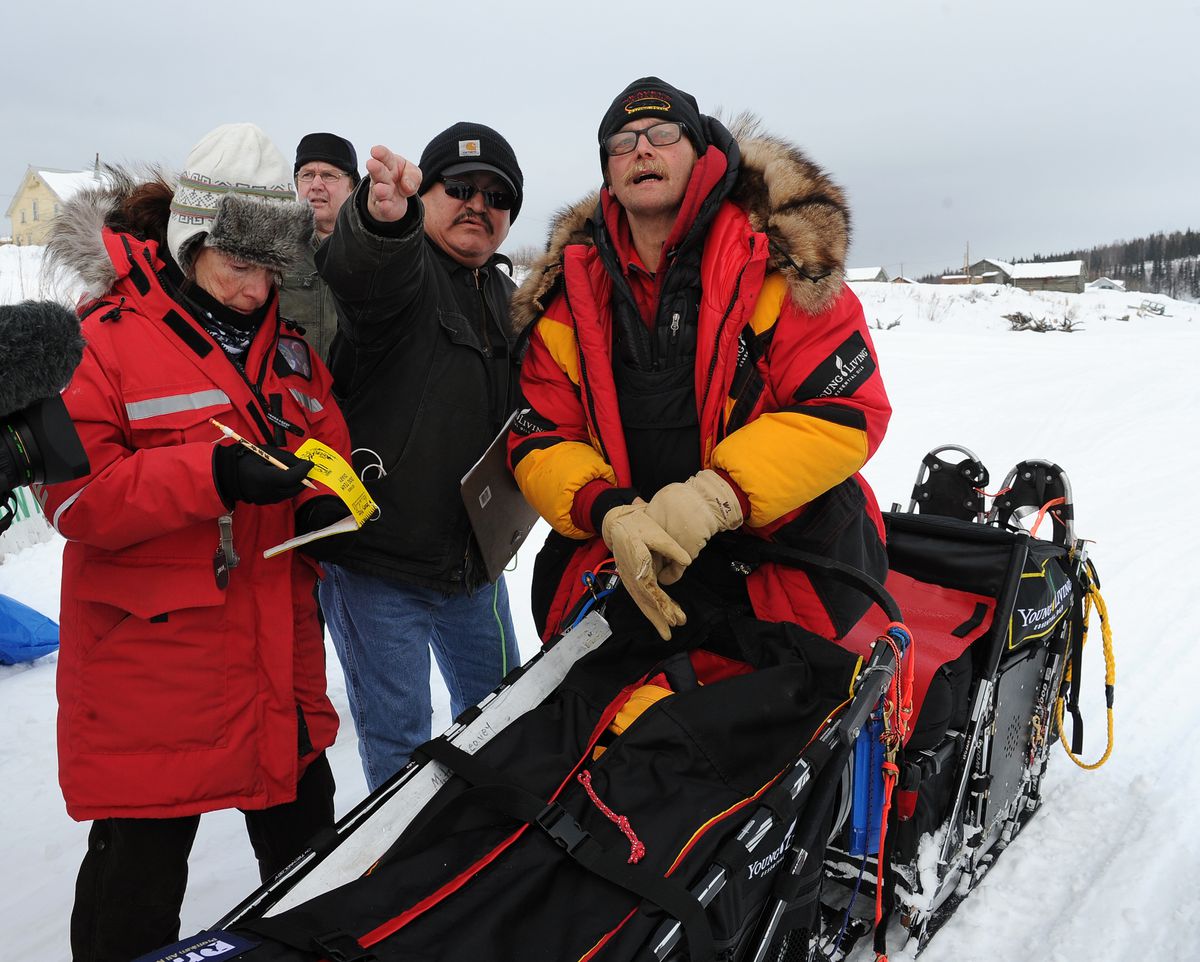 As veterinarian Debbie Hadlock checks Iditarod musher Mitch Seavey’s vet book on Saturday afternoon, checker Lawrence Esmailka points to the outgoing trail at the village of Nulato on the banks of the Yukon River. Seavey spent one minute at the checkpoint. (Bob Hallinen / Alaska Dispatch News)

As veterinarian Debbie Hadlock checks Iditarod musher Mitch Seavey’s vet book on Saturday afternoon, checker Lawrence Esmailka points to the outgoing trail at the village of Nulato on the banks of the Yukon River. Seavey spent one minute at the checkpoint. (Bob Hallinen / Alaska Dispatch News)

Necropsy reports indicate that hyperthermia — overheating — caused the death of a dog that died Friday night while being flown from Galena to Anchorage with 74 other dropped dogs.

Smoke was a 2-year-old from the team of veteran musher Scott Smith, who dropped the dog at Manley Hot Springs on Tuesday. Smoke had a wrist injury, according to race reports.

In a written statement released Saturday night, race officials said the necropsy findings "were consistent with hyperthermia, although further testing will be conducted to complete the study."

"The sequence of events that contributed to the warm temperature within the aircraft are being reviewed," the statement said.

Smoke was the second dog to die in the race. Necropsy findings on Deacon, a 2-year-old from Seth Barnes' team, have not been released. Deacon collapsed and died Thursday just outside the Galena checkpoint, race officials said.

Mitch Seavey 1st to Kaltag; gets a prize and an 8-hour break

After charging through Nulato, Mitch Seavey was the first musher to reach Kaltag on Saturday night — and he has no choice but to stay awhile.

The two-time Iditarod champion will take an eight-hour break in the village, the last place he can fulfill the race requirement of an eight-hour layover at a checkpoint on the Yukon River.

Seavey's team has been making great time in the last two days to seize the race lead. That speed paid off Saturday night in the form of the Bristol Bay Native Corporation Fish First Award, given to the first racer to reach Kaltag.

The race leaves the Yukon after Kaltag and heads to the Bering Sea coast. The finish line in Nome is 261 miles away.

The 57-year-old two-time Iditarod champion wasted no time. He never got off his sled runners. He briefly commented that it was a "nice trail."

Seavey left a minute after he arrived. He had 11 dogs in harness and carried two in his sled bag.

A crowd around the river cheered when Seavey came in and called "good luck" as he quickly headed out. Temperatures were around 24 degrees.

Seavey still must take his mandatory 8-hour stop at a checkpoint on the Yukon River, which means he'll be taking it in Kaltag, the last checkpoint before the race leaves the river. Kaltag is 47 miles away from Nulato and about 633 miles into the race.

The rest of the front-runners — Wade Marrs, Dallas Seavey, Joar Leifseth Ulsom and Nicolas Petit — remained in the previous checkpoint of Koyukuk at 5:30 p.m. All but Petit still needs to do their 8-hour stop on the river.

A 2-year-old dog from Iditarod veteran Scott Smith's team died while in transit from the Galena checkpoint late Friday, after the musher dropped the dog earlier in the race, said a statement Saturday morning from Mark Nordman, race marshal.

Smith had dropped the male dog named Smoke on Tuesday at the Manley Hot Springs checkpoint, due to a wrist injury, according to the Iditarod Trail Committee. Smoke died while being transported by plane from Galena to Anchorage and was in a travel kennel onboard the flight.

Typically, the Iditarod transports dogs that mushers choose to leave behind at checkpoints and eventually brings them to Anchorage.

"A necropsy will be conducted by a board-certified pathologist to make every attempt to determine the cause of death," the statement said.

Chief Iditarod veterinarian Stu Nelson said Smoke was one of 75 dogs on a chartered flight that left Galena on Friday night, bound for Anchorage. Galena serves as a hub for Iditarod Air Force pilots on this year's race, with dogs from prior checkpoints in the race delivered to Yukon River community before flying back to Anchorage.

Nelson said in a phone interview Saturday that dogs are transported in wooden travel kennels constructed by the Iditarod with each individual kennel capable of holding up to two dogs. He didn't know whether Smoke was in the kennel by himself or with another dog.

Smoke is the second dog to die during this year's Iditarod.

Smoke is not the first to die while being transported by Iditarod officials.

In 2013 a dropped dog belonging to musher Paige Drobny died in Unalakleet of asphyxiation after he was buried in a snow drift during severe weather conditions.

Following the incident, the Iditarod updated its dropped dog policies, distributing a 40-page manual outlining procedures and adding additional dog housing in Unalakleet for dogs in transit. Nelson said that document, which outlines everything from when to feed dropped dogs to how to remove them from the airplane safely, is still the primary source of dropped dog protocols.

[Number of dropped dogs about 'normal' so far despite cold, Iditarod veterinarian says]

One dog died during the 2016 race. That dog, 3-year-old Nash, was killed after being struck by a drunken snowmachiner.

— Tegan Hanlon in Huslia and Suzanna Caldwell in Anchorage

HUSLIA — Bill Derendoff pulled a handheld radio out of his pocket here Saturday afternoon and set it on the table while he ate at the community hall, where pans full of food are set out for the incoming mushers, residents and visitors. A large bingo board was bolted to the wall and sheets of paper were hung for volunteers to signup to help support the race.

Derendoff, 72, said that radio is how he and the 300 or so Huslia residents communicate in a community without cellphone service. Each household has a base radio set to channel 10, and many people carry handheld radios too.

"It's great for emergencies," he said. He recounted a time he was hunting and cutting up the body of a moose about 10 miles out of town. He stabbed himself in the leg, and over the radio called for assistance from the health aide.

Ginger Attla, 41, said the village also uses the radios to make community announcements, inviting everyone to potlatches or school events. Saturday morning, someone called out that the checkpoint "needed more breakfast," she said, and people responded with pancakes, syrup, butter, corn beef hash and more.

"Now we have too much breakfast," said Attla, the great niece of the late George Attla, a champion sprint musher and member of the Alaska Sports Hall of Fame who died in 2015. Attla pulled a sled up to the checkpoint Saturday afternoon with a container of spaghetti and another of pasta salad to contribute to the buffet inside.

She said that Huslia — community that sits on north bank of the Koyukuk River, about 290 air miles west of Fairbanks — has long been promised cellphone service, but she has her doubts.

Previously on the blog: Marrs hustles out of Huslia with Dallas Seavey right behind