An Iditarod dog was reunited with Norwegian musher Lars Monsen after an hourslong search for the runaway canine Saturday in Anchorage.

Hudson had been housed in a kennel inside a trailer along with the rest of the team, Monsen said. But at some point, Hudson managed to break out of the kennel. And when Monsen opened the trailer doors early Saturday, Hudson took off.

Monsen asked the public for help finding the dog. A photograph of Hudson, a black husky wearing a yellow and red collar, circulated on the Internet.

Monsen said someone eventually spotted Hudson near the railroad tracks north of downtown late Saturday afternoon. Monsen took his team to the area in the hope of luring the missing dog.

Hudson came running, he said. "He probably smelled them or heard them."

Hudson isn't the first Iditarod dog to get loose in Anchorage. Twice in the last four years, a dog has been killed after getting loose, although neither were part of a race team at the time of their deaths.

Last year, a few days into the race, a dog that had been dropped by musher John Baker escaped from handlers in Anchorage who were caring for it. The dog, named Groovey, was apparently hit by a vehicle.

On the day of the 2015 ceremonial start, a dog from the team of Colorado musher Lachlan Clarke was hit by a car after it broke away from its tether at Campbell Tract. 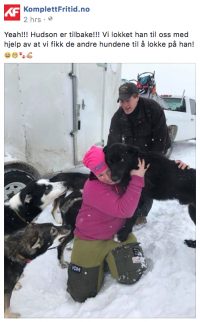 The dog, a male named Stuart, wasn’t in harness that day – he was one of four dogs that didn’t run that day and were waiting for Clarke at the finish line of the ceremonial run through Anchorage. Stuart was chained to the truck and its clip came undone, and reportedly bolted when people tried to catch him.

Another Iditarod dog escaped in Anchorage during the 2015 race and was found alive a month later in Palmer.

Sarabi, a dog dropped by musher Laura Allaway, got loose from his handlers in South Anchorage and traveled all the way to Palmer. In April, he was lured into a live trap and returned to Allaway's kennel near Fairbanks.

And then there was the time Lance Mackey lost his Girlfriend in Spenard.

A lead dog named Girlfriend darted away when Mackey took her out of her truck kennel in the parking lot of a Spenard hotel.

Girlfriend got loose the Friday before the race and was reunited with Mackey the next day after being found near the airport early Saturday morning.