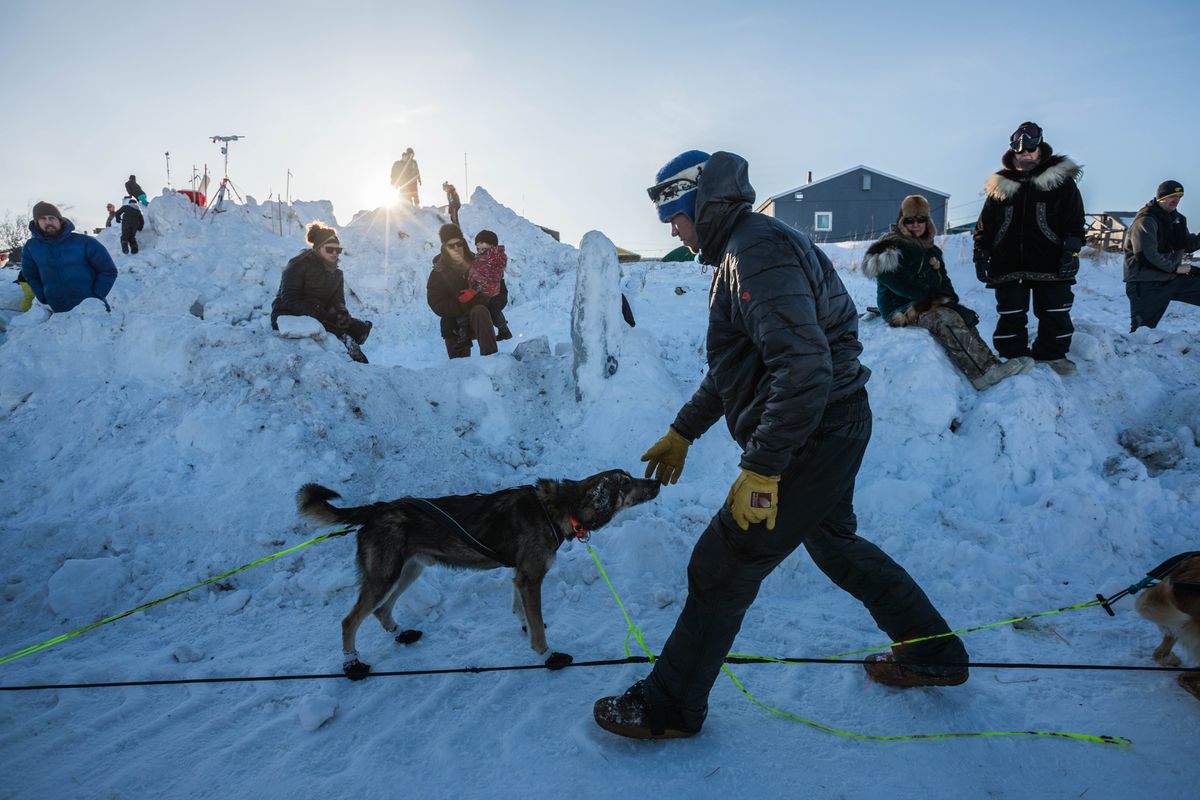 Norwegian musher Joar Leifseth Ulsom, who at 31 is already a regular top 10 Iditarod finisher, claimed the race lead Monday on the Bering Sea coast as first to Koyuk.

Ulsom passed Girdwood musher Nic Petit, who had led for much of the race but veered off course Monday morning. He arrived at Koyuk (mile 827) at 1:01 p.m. with 13 dogs.

In Koyuk Monday afternoon, Petit told the Iditarod Insider that his dogs mentally had a rough trip into the checkpoint. "It was tough going for a long time," he said.

"On the way to Iditarod it was the same type of deal but there's trees and stuff — it's not wide opened with another race's stakes out there," he said, referring to the Iron Dog snowmachine race that passed through the same area in February.

According to the race GPS tracker, Petit lost his lead when he lost the trail.

He veered to the east between the checkpoints of Shaktoolik and Koyuk, headed toward the coast and away from the trail. Then he turned around and returned to the route.

Video posted by the Iditarod Insider shows the two mushers racing in blowing snow on the way to Koyuk. Flights couldn't get into the village Monday due to bad weather.

Mark Nordman, Iditarod race director and race marshal, said this year's 50-mile course between Shaktoolik and Koyuk differed from the one last year.

Typically, the trail cuts across the Norton Sound ice. Before the race, Nordman said, he expected a lack of ice in the area to push the trail closer to the coast this year. But, ultimately, trail-makers put in a route about halfway between those two options, he said Monday.

"There was a bunch of jumbled ice and stuff that they've gone around," Nordman said.

Zack Steer, Iditarod logistics coordinator, said the trail between Shaktoolik and Koyuk was marked with about 1,000 wooden stakes, the tips neon orange and wrapped in a strip of reflective tape. Blue ribbons were tied to each one, he said.

But, Steer said, stakes for the Iron Dog trail also remain in the area. They look similar to the Iditarod ones, he said, except there's no blue ribbon and they say "Iron Dog." He said he heard there's also a local hunting trail on the sea ice.

Ulsom did not appear to lose the trail on his way to Koyuk Monday morning.

Before Petit lost the race route he appeared in good spirits at Shelter Cabin, about 15 miles down the trail from Shaktoolik, where he rested with the lead and spoke to Iditarod Insider. What did he have to do to maintain his top spot, the Insider asked.

"I don't know because I've never done it," Petit answered, eating a steaming breakfast while using what appeared to be a broken trail marker as a spoon.

Petit soon mushed on, north along the coast for a stretch of trail that the official race map describes as "bleak, flat and deadly monotonous."

Monday afternoon in Unalakleet, an earlier race checkpoint, race fans were tracing Petit's route out of Shaktoolik on a video screen that showed the GPS tracker, speculating about what led to the musher's 8-mile, 1.5-hour setback. Perhaps a ground blizzard, someone said. Maybe the trail blew in.

Compared to the 2017 Iditarod, which Mitch Seavey won in record time on a hard and fast trail, this year's trail is slow and snowy.

Each of the top three teams — Ulsom, Petit and Seavey — benefit from a different racing style, said Karen Ramstead, a former Iditarod competitor turned race judge. In an interview in Unalakleet Monday, Ramstead said she believes this year's top three mushers' personalities are reflected in their dog teams.

"If you look at Nic's team they're kind of wild and a little crazy and out of control and that's a lot like Nic," she said. "And Joar's team is kind of quiet and driven. And Mitch's is a disciplined — real disciplined, focused dog team."

She said she didn't believe one strategy or element launched Petit and Ulsom to the very front of the pack this year. Petit, she said, has been building a dog team for years and putting the pieces together. Ulsom has a "lovely, solid looking dog team," she said. "You can never count him out that's for sure."

"It's more the whole package deal than it is any one component," she said. "There's a little bit of science. A little bit of strategy. And a little bit of magic that goes into winning teams so it's just which one is going to have that combination this year of all those factors?"

For Petit's "piece" this year, she said, he will have to figure out how to keep a level-head and fix things after a major mishap. In this case, veering off the trail.

"What just happened going across to Koyuk could blow it wide open," she said.

The trail doesn't appear to get easier out of Koyuk.

Trailbreakers put in an overland route between there and Elim, according to an email  taped to a door at the Unalakleet checkpoint Monday. The trail is four or five miles shorter, Steer said, but has more hills.

According to the email, mushers should expect more blowing snow.