‘It’s going to be a dream’: Barring any mishaps, this Norwegian musher is poised to win the 2018 Iditarod 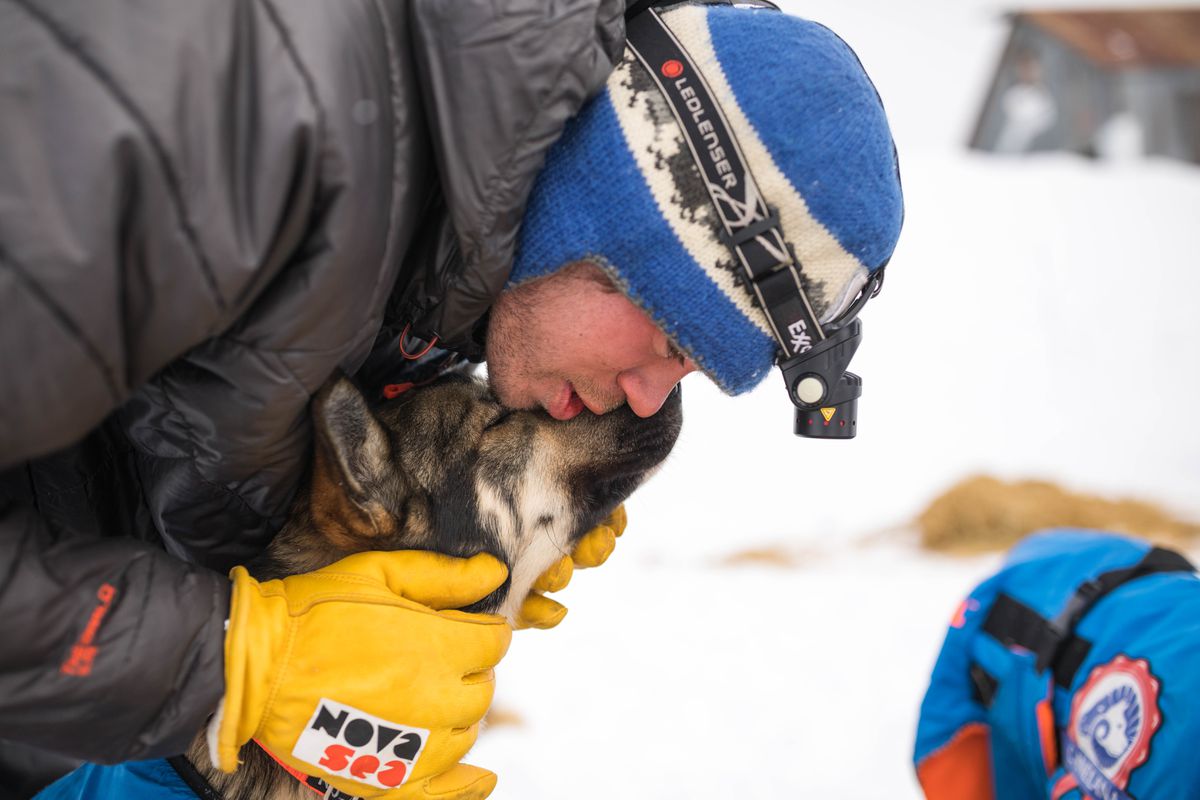 Joar Leifseth Ulsom talks to his dog Kusko, who he dropped at the White Mountain checkpoint on Tuesday. “I’m sorry I can’t take you across the finish line. Maybe next time,” he said. (Loren Holmes / ADN)

Joar Leifseth Ulsom talks to his dog Kusko, who he dropped at the White Mountain checkpoint on Tuesday. “I’m sorry I can’t take you across the finish line. Maybe next time,” he said. (Loren Holmes / ADN)

WHITE MOUNTAIN — Norwegian musher Joar Leifseth Ulsom had just woken up from a nap Tuesday afternoon. His hair wild and his face burned red by the wind, the musher dropped a large burrito, stored in a vacuum-sealed bag, and two bottles of Gatorade into a pot of boiling water to thaw in the city hall of this village.

Leifseth Ulsom has been here many times before, to the final major checkpoint of the Iditarod Trail Sled Dog Race. But never like this. And never with so much at stake.

After a surprising reversal of fortunes late in the race, the consistently high-performing 31-year-old had a comfortable lead in the 1,000-mile race, and just 77 miles to go until the finish line.

"I'm in the position now to possibly win this thing so if I have a good run to Nome, that would be awesome," Leifseth Ulsom said, still groggy after an hours-long sleep during his eight-hour mandatory break here.

He was quiet, calm and steady, as he so often is.

Barring any mishaps or upsets, Leifseth Ulsom is poised to win the Iditarod early Wednesday morning, with a 3 1/2-hour lead over his closest competition, Girdwood musher Nicolas Petit, and about a 5 1/2-lead over the next team, of three-time and defending champion Mitch Seavey.

Leifseth Ulsom would bring a new name to the list of Iditarod champions and would be the first winner not named Seavey to win the race since 2011, when Kotzebue musher John Baker crossed the finish line first.

Leifseth Ulsom said he's ready for it. He has wanted this for "a long, long time."

The story of the 2018 Iditarod is one of deep snow, a slow trail and a last-minute leader reversal.

"I think this was just a challenging race overall," Leifseth Ulsom said. "And we were in the right place at the right time, I guess."

Leifseth Ulsom emerged as the front-runner when Petit lost the trail in a snowstorm on the punishing Bering Sea coast Monday morning, somewhere between Shaktoolik (mile 777) and Koyuk (mile 827).

At 11:22 a.m. Tuesday, Petit and his 11 sled dogs, wearing blue jackets, pulled into White Mountain, a community of about 200 people on the edge of Fish River. Up the hill, inside the checkpoint, Leifseth Ulsom slept in an orange sleeping bag atop a mattress on the floor.

Outside, temperatures hovered around 10 degrees as Petit — a ski bum turned competitive musher — tore up a bale of straw to make beds for his dogs on top of the snowy, frozen river. Next to him, Leifseth Ulsom's dogs slept.

Sure, anything can happen in the Iditarod, Petit said, but he no longer expected to win this year. There's just not that much trail left.

As Petit prepared his dogs' food Tuesday, he complained aloud about the poorly marked trail on the section over the sea ice where he got lost. He said blowing snow swamped the route. He couldn't find the trail markers — wooden stakes with orange tips, reflective tape and blue ribbons tied to them. There are similar markers in the area from February's Iron Dog snowmachine race.

When Petit did find a marker, he said, he followed it.

['I started bawling': Petit recalls the moment he lost the Iditarod lead]

"I didn't realize half of them were Iron Dog markers and then there's a hunting trail, it's just a snowmachine trail and I'm like, 'Welp, whoever is traveling right here is going the same direction we are.' So I hopped on it and then it ended at land," he said.

He had to backtrack to rejoin the trail. The whole detour — approximately 8 miles and 90 minutes — was taxing on his team, he said. And it cost him the race.

"It was one of those red lines that didn't blow the engine, but I can't do it again," Petit said. "I can't push my team. People usually save that for this push (to Nome), but I pushed in the wrong direction."

On the trail out of Elim, the next checkpoint after Koyuk, Petit said it hit him that he had lost the lead permanently.

"I started bawling like a little baby. This race can be an emotional roller coaster," he said.

"I just let out what I needed to let out and then pulled my head out of my rear end and went back to just doing what I do with my dogs. Because who cares? Everybody knows what my dogs did."

'Right on the verge of a win'

A race volunteer woke up Leifseth Ulsom on Tuesday afternoon, shortly before 2 p.m., as he had asked.

After providing a urine sample for a mandatory drug test, he walked over to a window and looked down the hill at Petit's team and Seavey's team. Seavey had arrived about a half-hour before Leifseth Ulsom woke up.

The three mushers traveled in a pack for much of the race, jockeying for first place.

Leifseth Ulsom said he wasn't sure exactly where Petit lost the trail. In fact, when he arrived in Koyuk, he thought he was in second place.

"I feel very bad for him, that he was leading the race and he takes a wrong turn," Leifseth Ulsom said. "I'd be sick to my stomach if that happened."

From Leifseth Ulsom's first Iditarod in 2013, when he busted the record for fastest finish by a rookie, he has always run at the front of the pack. In his five previous Iditarods, he has never placed lower than seventh. Last year, he finished fourth.

"He's always been right on the verge of a win here. And, so far so good. It's not over yet."

Ever since Leifseth Ulsom was a boy, growing up in a suburb in Norway, he always wanted to have a sled dog team, he said. He just likes dogs.

"This dream of having a dog team, I think has been with me since I was a little kid," he said. "My parents would just never let me have it."

By age 11 or 12, he said, his parents agreed to let him have a "street mix" named Tassen, who pulled him on skis. At age 16, Leifseth Ulsom said he moved out, "and then pretty soon I had four dogs of my own."

He got a wooden sled, and he learned to mush.

"I've always liked nature. And, growing up, I was fishing and hunting and hiking all the time," he said. "It just came very natural to me to mix dogs in there."

He has a visa to live in the United States as an athlete, he said. He races as a member of Racing Beringia — part of GoNorth! Adventure Learning, a nonprofit program that creates K-12 education plans based on expeditions, like the Iditarod, said his girlfriend, Mille Porsild, the nonprofit's executive director.

Because of his visa, he can't keep the cash he earns racing, said Porsild, who is flying along the trail and was in White Mountain on Tuesday. She said Leifseth Ulsom donates his race winnings to the nonprofit. The nonprofit and Ulsom's sponsors pay for his expenses in Alaska, she said.

Porsild described Leifseth Ulsom as a kind, thoughtful, calm and giving person. He's sometimes shy about his English, she said, but he's gotten a lot better about it.

Ultimately, she said, Leifseth Ulsom is just "a dog man."

"He loves to have a good time, to relax, make a fire and sit down and have a cup of coffee with his dogs. And I think they know that," she said. "That's where Joar's comfortable, is with the dogs."

(By the way, Joar is pronounced "your.")

Porsild said the couple often has eight or 10 dogs in their home in Willow, which she described as a "small little apartment."

As Leifseth Ulsom prepared to leave White Mountain, he left two dogs behind, to eventually be flown home. He gave one of those dogs, named Kusko, a hug and said, "I'm sorry I can't take you across the finish line. Maybe next time."