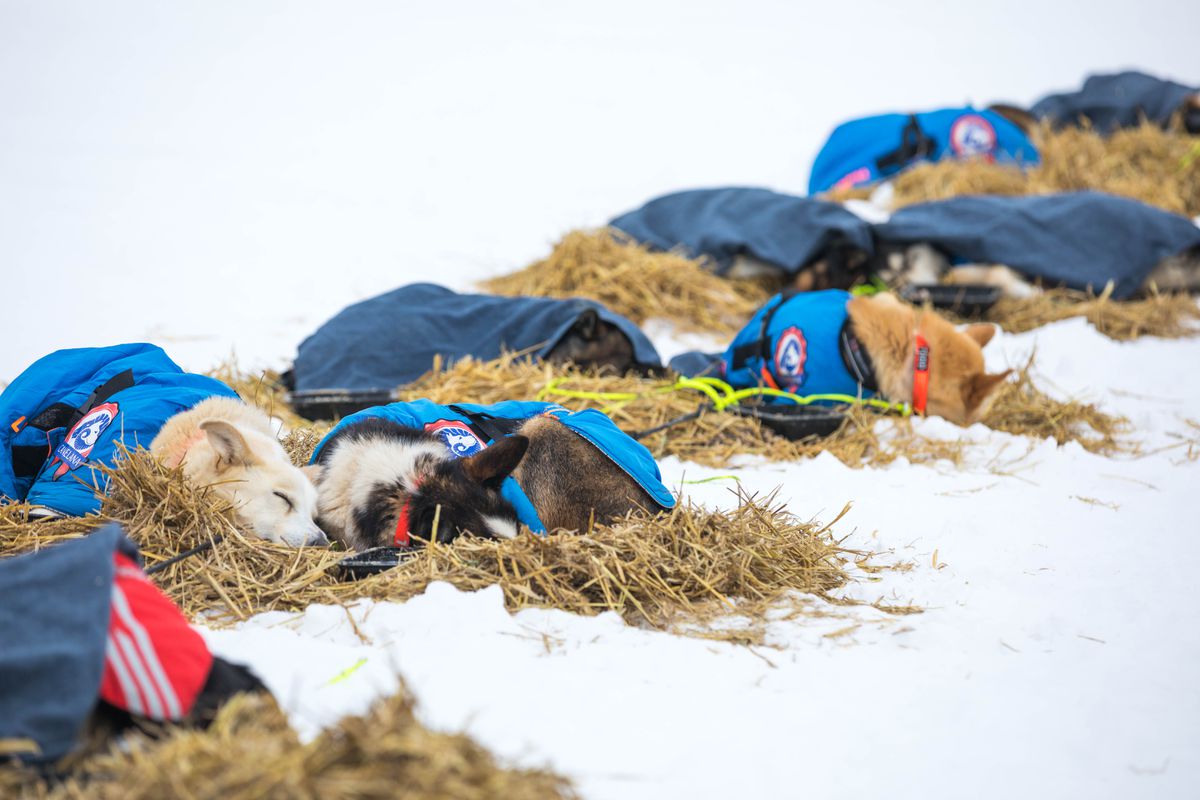 Joar Leifseth Ulsom’s dogs rest in White Mountain near the end of their championship run in March. (Loren Holmes / ADN)

Joar Leifseth Ulsom’s dogs rest in White Mountain near the end of their championship run in March. (Loren Holmes / ADN)

Nearly half the usual number of mushers signed up for the Iditarod on Saturday, a turnout three-time champion Mitch Seavey said reflects a lack of faith in race management.

Three race champions were among those who signed up — reigning champion Joar Leifseth Ulsom and four-time champions Jeff King and Martin Buser.

Seavey was among those who passed on the opportunity to sign up, as did his son Dallas, a four-time champion.

Iditarod spokesman Chas St. George said some mushers might be waiting to see how the race responds to calls that it replace board members who have conflicts of interest and revisit a personal conduct rule that Seavey called "onerous, wide-reaching and oppressive."

"I think mushers are looking to see how we're moving forward," St. George said Saturday after the annual signup and volunteer picnic at Iditarod headquarters in Wasilla.

"And so far you've got five new board members that are joining this board."

The new members will be announced next week, he said.

Because of the new board members, plus the Saturday resignation of the Iditarod's controversial chief of drug testing, Seavey said he is likely to sign up for the 2019 race.

"What the small field tells me is the Iditarod Trail Sled Dog Race needs to curry the favor and goodwill of mushers," Seavey said. "And I am optimistic that will happen.

"So I'm optimistic I can sign up at some point here."

Mushers have until Nov. 30 to sign up for the 2019 race, although typically the majority sign up in June. Last year, 52 signed up in June and a total of 67 started the race.

The small number of first-day signups comes during a tumultuous time for the Iditarod. The race has encountered mushers unhappy with a personal-conduct rule that includes a gag rule, criticism over dead dogs and dog care, the loss of sponsors and a dog-doping scandal involving Dallas Seavey, who subsequently skipped the 2018 race.

The board of directors is about to get a makeover that will eliminate some members with conflicts of interest. The race recently decided that board members cannot be racers or be related to racers.

Three members have resigned — Aaron Burmeister, Wade Marrs and Rick Swenson. Burmeister and Marrs both raced this year but did not sign up for the 2019 race on Saturday; Swenson is a five-time champion who last raced in 2012. Swenson chose not to run for another term on the board, St. George said.

Also gone is Morrie Craig, the Iditarod's chief of drug testing who created controversy during this year's race. The Iditarod announced Craig's resignation Saturday but said he will continue to work on research projects with the Iditarod.

During this year's race, Marrs accused Craig of threatening and intimidating him in the moments before mushers left the starting line in Willow. Craig admitted he made ill-timed remarks and was reprimanded by the board of directors while the race was still in progress.

In a letter sent this week to the Iditarod Official Finishers Club, Mitch Seavey said he would not sign up for the race as long as Craig remained chief of drug testing and as long as the personal-conduct rule remained intact.

"For the first time in 25 years I won't sign up for the Iditarod Race (on the) last Saturday of June," Seavey wrote. "I love the Iditarod Race, and I am willing to accept a lot of things I don't really agree with. But there are two existing circumstances which are unacceptable to me because they leave mushers far too vulnerable."

Those circumstances, he said, were Craig and the personal conduct rule.

Seavey, who in the last six Iditarods has registered two victories and four other top-three finishes, said he went to Saturday's picnic in Wasilla.

"I spent the whole day at the signup with the inside information, if you will, that Dr. Craig might be leaving or asked to leave," he said.

No announcement to that effect was made, "so I left at 2:30" when the day's signup period ended, he said. "At roughly 3 p.m., he announced his resignation."

Craig comes with considerable baggage. Besides being reprimanded by the Iditarod for his comments to Marrs, Craig last year was fired by Oregon State, where he was a tenured toxicology professor, for sexual harassment and bullying; he is appealing his firing.

St. George said the board requested Craig's resignation in March but quickly changed its mind. Craig's recent decision to leave his position as head of the race's drug-testing program was his own.

"Dr. Craig resigned," he said. "The board didn't request the resignation."

Mushers also called for board members with conflicts of interest, which includes being Iditarod mushers or related to Iditarod mushers, resign by the end of June. Jonrowe's wife, DeeDee Jonrowe, and Baker's brother, John Baker, have both retired from racing, and Owens' daughter Melissa is not entering the 2019 race, absolving them of conflicts of interest, St. George said.

St. George said Andy Angstman, a Bethel man who placed 42nd in the 2007 Iditarod, is the board's new musher representative, replacing Marrs. The musher rep is a non-voting board member.

Besides the three champions who signed up Saturday, other big-name mushers to enter the race included Nic Petit of Girdwood, Aliy Zirkle of Two Rivers and Pete Kaiser of Bethel.

Seavey said Saturday's signups were low because mushers are getting blamed "for any pressures or problems the race is having."

"I'd like to see some movement on these things — see who these new board members are and see what changes they're going to do on the gag rule," he said.

"… I'm optimistic with the new board and a new direction they'll begin the difficult task of building up the faith the mushers once had in the board and the organization."

This story has been edited to include that Saturday's signup period ended at 2:30 p.m. and that the board of directors asked for Morrie Craig's resignation in March,  not May.