When does the 2019 Iditarod start? (And 10 other questions about Alaska’s most famous sled dog race) 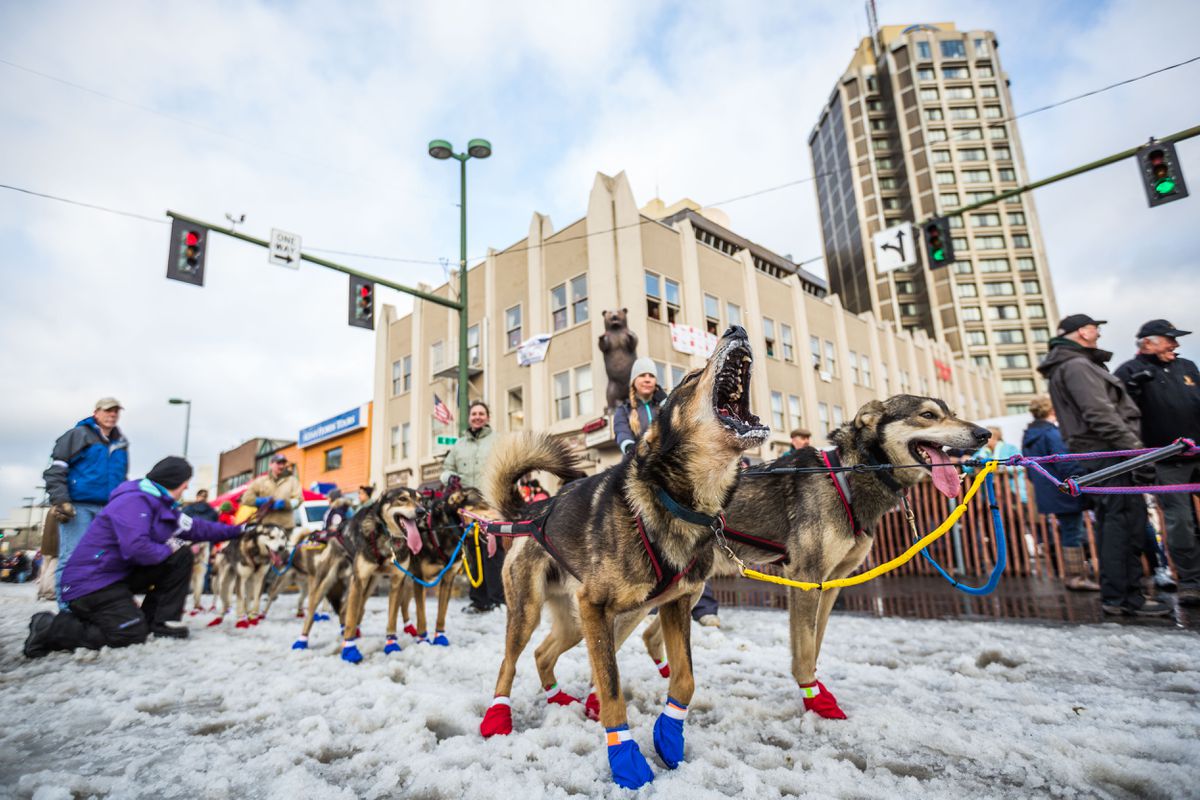 Dogs in Mitch Seavey's team howl in anticipation of the ceremonial start of the Iditarod Trail Sled Dog Race in Anchorage in 2015. (Loren Holmes / ADN)

Dogs in Mitch Seavey's team howl in anticipation of the ceremonial start of the Iditarod Trail Sled Dog Race in Anchorage in 2015. (Loren Holmes / ADN)

The ceremonial start for the 47th annual Iditarod Trail Sled Dog Race is Saturday, March 2. The first team will leave downtown Anchorage at 10 a.m., but the streets will come alive a couple of hours earlier with the sound of barking dogs as mushers prepare for their departure.

The restart is Sunday, March 3, when teams will leave the Willow Community Center beginning at 2 p.m. That’s when the race clock starts ticking.

The ceremonial start takes teams on a festive 11-mile journey through Anchorage. Snow stored over the winter is trucked downtown and spread onto the city streets to give the sleds something to glide on.

Teams leave the start line at Fourth Avenue and D Street in two-minute intervals. They turn onto Cordova Street and drop down the hill to Mulcahy Stadium, where they leave the streets for the trails. The run ends at Campbell Airstrip in Far North Bicentennial Park.

How many teams are in the race, and who are they?

Women make up nearly a third of the field -- there are 17 of them. And although there have been more women in a handful of other races -- there was a record 26 in 2016 -- there’s never been a higher percentage of women. Women make up 32.7 percent of this year’s field, a slight increase from 2015, when 25 women made up 31.3 percent of the field.

How many dogs are on a team? Are there substitutes?

A new rule this year reduced the maximum number of dogs per team to 14. The previous maximum was 16.

The only time a musher can add dogs to a team is between the ceremonial start and the restart. A musher can drop a dog at any checkpoint, for any reason -- because they are sick or injured, or as part of a race strategy. Dogs left behind at checkpoints are cared from by Iditarod volunteers until they are flown back to Anchorage.

Any other new rules this year?

Yes, and one of them is a big one.

Mushers who have a dog die during the race will not be allowed to continue racing unless the death "was caused solely by unforeseeable, external forces," according a rule adopted in June by the board of directors.

Stuart Nelson, the Iditarod’s chief veterinarian, said he could think of only two occasions when a dog’s death was “caused solely by unforeseeable, external forces” – in 2016 when a drunk snowmachiner crashed into Jeff King’s team on the frozen Yukon River and killed 3-year-old Nash, and in 1985 when a moose stomped Susan Butcher’s team, killing two dogs and injuring 13.

One dog died during last year’s Iditarod. Blondie, a 5-year-old on Katherine Keith’s team, died of “aspiration pneumonia” after being dropped at a checkpoint. Race officials said Blondie was indoors and under a veterinarian’s care when it died.

When will the race end?

In 2017, when Mitch Seavey set the race record of 8 days, 3 hours, 40 minutes, 13 seconds, he reached Nome at 3:40 p.m. Tuesday. That year, the race started in Fairbanks on a Monday, a day later than usual, because of open water and too little snow on the route out of Willow.

Only seven races have ended in less than nine days. Martin Buser was the first to break the nine-day barrier in 2002, but there wasn’t another eight-day winner until 2010 when Lance Mackey did it with 51 seconds to spare.

Six of the last nine champions, dating back to Mackey’s 2010 run, have finished in less than nine days. The record has been broken four times during that stretch (John Baker in 2011, Dallas Seavey in 2014 and 2016, Mitch Seavey in 2017).

It’s the award given to the last musher to finish the race. The slowest Red Lantern time came in 1973, when John Schultz finished in 32 days.

Many mushers enter the Iditarod with the sole desire to get their dogs safely to Nome, so there is no dishonor in winning the Red Lantern.

Don’t confuse the Red Lantern with the Widow’s Lamp. The Widow’s Lamp is a small lantern lit on the day of the restart. It hangs on the burled arch that marks the Nome finish line, where it burns until the last musher finishes. The Red Lantern winner is given the honor of extinguishing it.

The Widow’s Lamp pays homage to the days when sled dogs carried freight and mail through Alaska, according to Iditarod.com. A musher would travel from roadhouse to roadhouse, where a kerosene lamp burned outside to guide him to his destination through the darkness.

What’s the age limit for the Iditarod?

You must be 18 or older the day the race begins. There is no age cutoff. As long as you run the necessary mid-distance races to qualify, you can enter.

Dallas Seavey became the youngest Iditarod champ in 2012, when he turned 25 during the race. Until then, the record belonged to Rick Swenson, who was 26 when he won the 1977 race.

The oldest finisher in Iditarod history is Norman Vaughan, who was 84 when he drove a team of 11 dogs under the burled arch in 60th place -- one spot ahead of last place. Vaughan, who lived till he was 100, finished four Iditarods, the first in 1978.

Has there ever been a tie in the Iditarod?

In 1978, Dick Mackey edged Rick Swenson by one second to win the 1,000-mile race. Their teams were side-by-side as they raced down Nome’s Front Street.

Years later, the two mushers told the story of their photo finish.

“For years,” Swenson told the Daily News, “the only trophy that we had in the house any place where you could see was my second-place trophy from 1978, to remember that a second counts.”

Who are those people in the sleds during the ceremonial start in Anchorage?

They’re called Idita-Riders, and they are the winners of the race’s annual online auction, which raises money for the race.

The auction for this year’s race ended last month.

Who has won the most Iditarods?

Four-time winner Dallas Seavey (2012, 2014, 2015, 2016) is skipping the Iditarod for the second straight year in favor of running the 744-mile Finnmarkslopet in Norway. He finished third in that race last year.

What does the top musher win?

For his victory last year, Joar Leifseth Ulsom won a new truck and a check for $50,612.

The size of the purse varies from year to year, depending on sponsorships, entry fees and fundraising. This year’s purse is $500,000, about the same as last year. The bulk of it will be paid to the top 20 finishers, but every finisher from 21st place to last place will collect $1,049.

While $50,000 buys a lot of dog food, the new Dodge truck awarded to winners can be every bit as precious. A new truck couldn’t have come at a better time for Ulsom last year -- he said his 1999 pickup broke down right before the race.