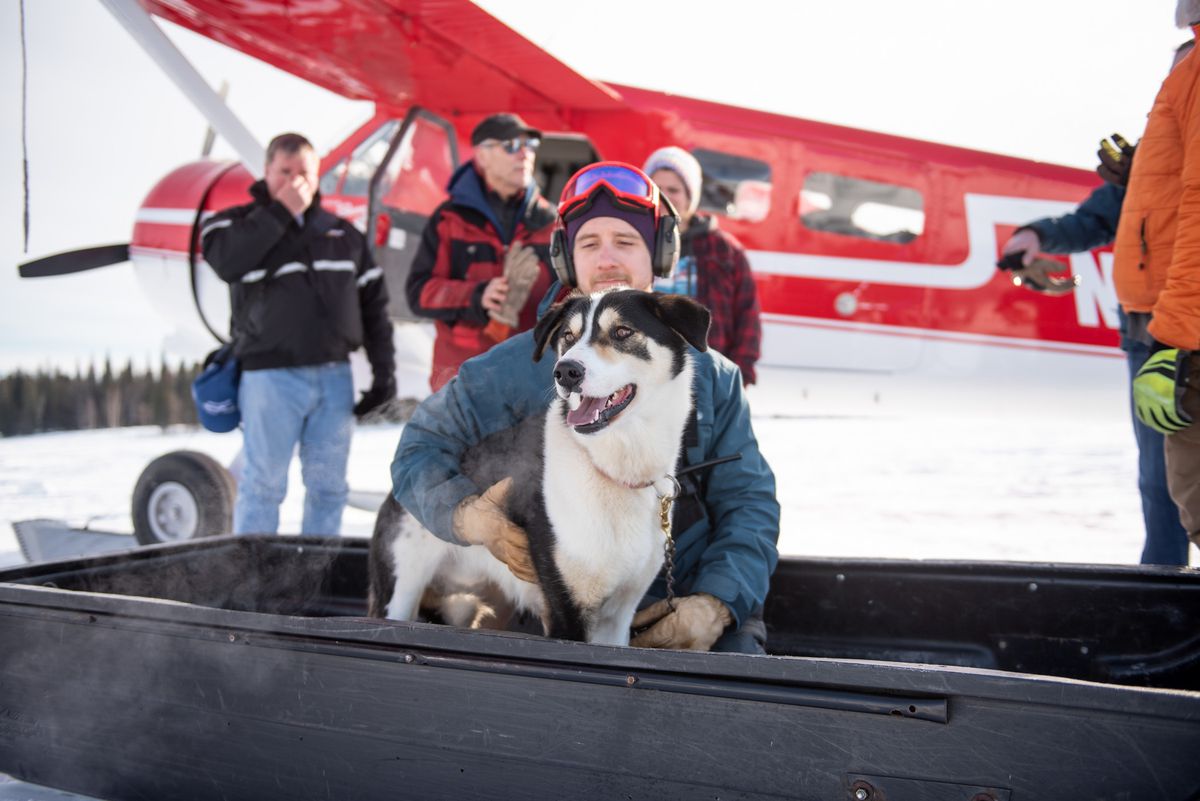 Eli High, a guide manager at Winterlake Lodge, offloads 2-year-old sled dog Dillon, who escaped his tether early on Monday. Dillon was flown back to Finger Lake, where he lives, after running after Iditarod teams to the next checkpoint at Rainy Pass. (Photo courtesy Scott Dickerson / Dickerson Stills + Motion.)

Eli High, a guide manager at Winterlake Lodge, offloads 2-year-old sled dog Dillon, who escaped his tether early on Monday. Dillon was flown back to Finger Lake, where he lives, after running after Iditarod teams to the next checkpoint at Rainy Pass. (Photo courtesy Scott Dickerson / Dickerson Stills + Motion.)

Iditarod veterinarians at the Rainy Pass checkpoint were greeted Monday with an unusual sight: a dog that was not part of any team, dragging a 10-foot length of chain.

The dog had traveled some 30 miles to be there.

Two-year-old Dillon is not an Iditarod dog. He lives at the Winterlake Lodge on Finger Lake, where he runs sled dog tours for guests as part of a recreational 18-dog team. The lodge also serves as the Iditarod’s Finger Lake checkpoint, so at this time of the year Dillon is frequently around the big-league sled dogs.

He is also, according to lodge owner Carl Dixon, “full of spit and vinegar.”

The 8- to 10-mile routes the Dixon dogs run hardly compare to the nearly 1,000-mile Iditarod Trail, but that didn’t stop Dillon from breaking his leash and taking off after a couple of teams early Monday morning.

Dixon isn’t quite sure how Dillon managed to get loose. What he does know is that when a Winterlake staff member went to the dog lot to give the dogs water Monday morning, all they found was Dillon’s broken chain.

He guesses that “when the Iditarod dogs started showing up on the lake, he heard all the commotion” and decided to follow.

All of the dogs in the Winterlake Lodge kennel came from Iditarod mushers — if they haven’t run the race themselves, they have parents who did, Kirsten said. Dillon was given to the Dixons by longtime Iditarod musher and fan favorite DeeDee Jonrowe.

“He certainly has the genetics to want to be a sled dog contender,” Kirsten said.

Skagway musher Ryan Redington spotted Dillon running on the trail between his team and the team of Bethel musher Pete Kaiser.

When the Dixons couldn’t locate Dillon, they asked the Iditarod’s communications team to call ahead to the next checkpoint at Rainy Pass to see if someone there had spotted him, Carl Dixon said.

Sure enough, the Iditarod hopeful had managed to make it all the way to Rainy Pass, a trip of about 30 miles with an elevation gain of about 900 feet.

Bart Stone, a pilot for Rust’s Flying Service, was on his way to Rainy Pass when a call came in from the company’s office asking him to pick up the dog and bring him home to Finger Lake. He called Dillon his “fuzzy passenger.”

“He’s just a happy-go-lucky guy who decided to follow someone,” he said.

The flight company’s assistant operations manager, Chris Norman, said he located Dillon at the vet checker’s station, “hanging out with a little snack.”

The dog hadn’t been injured, and miraculously, Carl Dixon said, he hadn’t gotten the chain he was dragging behind him tangled in any brush during his journey.

Dillon was well behaved on the 10- to 12-minute flight back to Finger Lake — more so “than most passengers I’ve seen on Alaska Airlines," Stone said.