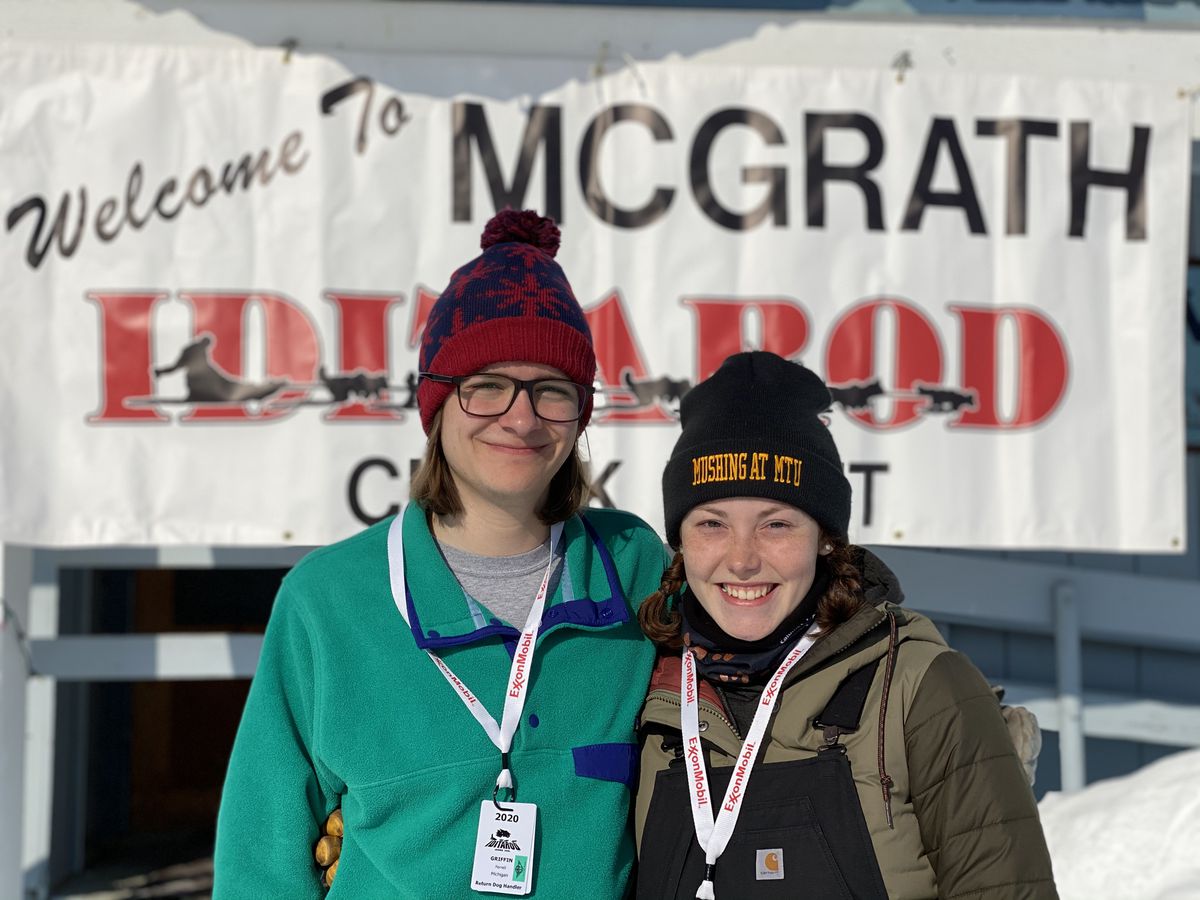 Griffing Ferrell, 20, from left, and Katy Gehrke, 19, photographed on Wednesday at the Iditarod checkpoint of McGrath. Ferrell and Gehrke are members of the mushing club at Michigan Tech University in Houghton, Michigan. (Photo by Blair Braverman)

Griffing Ferrell, 20, from left, and Katy Gehrke, 19, photographed on Wednesday at the Iditarod checkpoint of McGrath. Ferrell and Gehrke are members of the mushing club at Michigan Tech University in Houghton, Michigan. (Photo by Blair Braverman)

Katy Gehrke, 19, and Griffin Ferrell, 20, had no intentions of learning mushing when they enrolled at Michigan Tech University in Houghton, Michigan.

“I didn’t even know mushing was a real thing,” Ferrell said this week at the Iditarod Trail Sled Dog Race checkpoint of McGrath. “I thought it was something from movies, like back in the olden days.” But the students went to their school’s club fair and came across something surprising: a booth for the school’s official mushing club.

Michigan Tech’s mushing club, the only one of its kind in the country, has been around for just two years, but it already has 30 regular members and more than 200 students on its mailing list — and its students have entered races across the Midwest, ranging from sprint races to overnight runs. Their next group project: volunteering at the Iditarod. Last year, one student came to Alaska. This year, there are four. Next year — well, they’re hoping to pass a budget increase that would make this a regular part of their club curriculum.

Three of this year’s students are stationed at McGrath on the dropped dog crew, which means they sleep on the floor above the village cafe and work eight-hour shifts caring for the dogs that mushers have left behind. “We try to lift the dogs’ spirits. We make sure they don’t shake off their blankets when it’s cold,” said Gehrke, a sophomore majoring in communication, culture and media who hopes to pursue a master’s degree in linguistics. “We sit and pet them and tell them they’re good dogs.”

“There are so many bags of snacks for them!” said Ferrell, a junior majoring in computer science.

Both students think that mushing is a great fit for college students. As a sport with high barriers to entry — among them land, trail access, dog ownership and kennel costs — mushing can be difficult to get involved in if you’re not already part of an established community. The students work with a local kennel, the Otter River Sled Dog Training Center. They usually come out several times a week to help with dog chores, including feeding, scooping poop and training.

“At college,” Gehrke said, “they bring in dogs during exam weeks to help people de-stress. Why do that when you can go to a kennel with 70 dogs?” The sled dogs, she said, are some of her best friends.

So far, they’ve found that mushing culture in Alaska is pretty similar to what they’ve come to know in the Midwest: friendly people, awesome dogs and — for handlers — plenty of hurry-up-and-wait. They like the moose, the open space and the cold weather.

But one thing they say Alaska’s missing: a collegiate mushing club of its own.

“If Alaska could catch up, that’d be great,” Gehrke joked. “Then we’d have someone to compete with.”