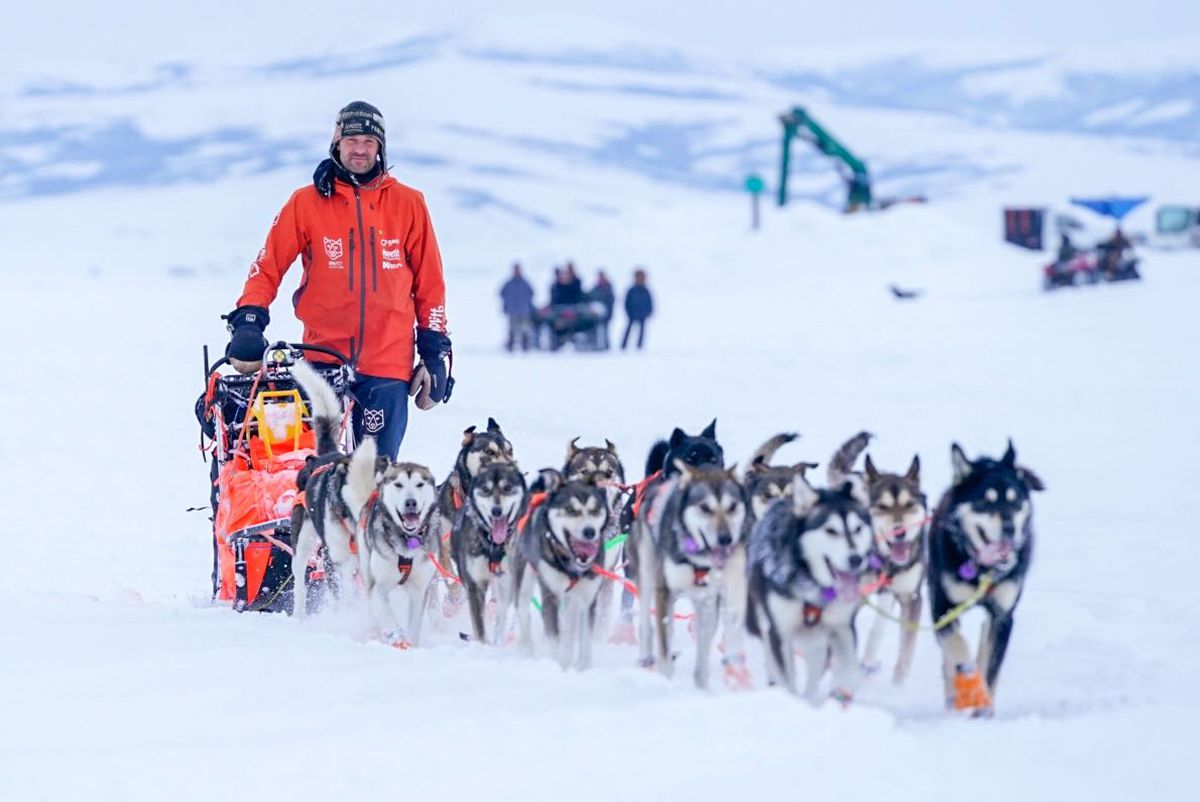 Thomas Waerner drives his dog team into Unalakleet on Sunday, March 15, 2020. Waerner is the first team to the coast during the Iditarod. (Loren Holmes / ADN)

Thomas Waerner drives his dog team into Unalakleet on Sunday, March 15, 2020. Waerner is the first team to the coast during the Iditarod. (Loren Holmes / ADN)

He reached Unalakleet shortly after 10 a.m. and left five hours later, 25 minutes before anyone else reached the checkpoint where the race hits the Bering Sea coast.

While the rest of the race’s frontrunners spent a portion of the morning stopped at Old Woman Cabin, a popular rest point between Kaltag and Unalakleet, Waerner pushed through, doing a 12-hour run to take the lead.

With daytime temperatures hovering around freezing, Waerner said he wanted to run through the night when it was colder, leaving his competitors to try to catch up during the day.

Waerner, the rookie of the year in the 2015 Iditarod, said he was surprised he was the only one to push through the night.

“I think if you want to win, you have to take some chances,” he said. “Maybe it pays off, maybe it doesn’t. That’s part of the game.”

Around 5:15 p.m., Brent Sass of Eureka arrived and was quickly on his way again. That put him in second place, two hours behind Waerner.

Waerner said he was hoping to get four hours of rest in Unalakleet, but when he realized how far back the other teams were, he took an extra hour. “Rest in the bank,” he called it.

“If I can stay ahead without them seeing me, that’s pretty nice,” Waerner said, adding there’s a psychological element to fleeing Unalakleet after five hours’ rest without being seen. “They start racing for second place, that can happen.”

The extra rest is vital, he said. In the first two days of the race — which started March 8 at Willow Lake, 703 miles away from here — he slept a total of 50 minutes, mostly in 10-minute increments.

Historically, once racers get to the coast, standings are more settled as most racers have taken their 24- and eight-hour rests. Waerner is in great shape with a large lead coming into Unalakleet, but he said anything can happen. The last time the first musher to Unalakleet was also the first musher to Nome was 2013, when Mitch Seavey did it.

“Now you have to start thinking strategy,” Waerner said.

Waerner, 46, was born in England but moved to Norway nearly 30 years ago, according to his Iditarod bio. He placed 17th in 2015 to finish as the top rookie but he hasn’t done another Iditarod since.

In his first Iditarod, he learned some things about feeding the dogs and keeping them mentally sharp, he said.

“They can get tired — tired in muscle — but not mentally tired,” he said.

Waerner said he started reading about the Iditarod in Norwegian sled dog magazines as an 11-year-old. He read about Susan Butcher and Rick Swenson. Then he worked as a handler in the 1990 and 1991 Iditarods, and he caught the bug.

“The dream of Iditarod has always been there," he said. “I think it’s the greatest thing you can do as a dog musher.”

Waerner is coming off a successful 2018-19 season during which he became the first person to win two of Norway’s major races, the 750-mile Finnmarkslopet and the 400-mile Femund Race, in the same year.

His goal in returning to the Iditarod was just to be competitive. To win it?

If that happens, Waerner said, he would want to return next year to defend the title. It costs about $50,000 for him to fly to Alaska with his dogs, which is why he’s only done the race once before. He hopes his sponsors will fund future Iditarod runs.

Waerner mushed through a night of snow and said the trail was rough from Galena to Unalakleet, a 169-mile stretch. But for a man who lives on top of a mountain in Torpo, Norway, that didn’t bother him. He said as long as he can see the next marker, he’s fine.

Waerner pulled into Unalakleet to a welcome party of about 70 people, including race officials and vets.

Jessie and Marty Towarak held signs welcoming him. Both reflected their heritage — Jessie’s was written in Norwegian and Marty’s was in Inupiaq. The Unalakleet couple was hoping Waerner would be the first one in.

“We love it,” Jessie, 36, said. “It’s really great to have this experience and to support them. It’s really unique.”

Marty, who grew up in Unalakleet, said he enjoys the influx of visitors from around the globe.

“This is an international event, and I am proud to be from one of the communities who host it,” he said.

Amber and Ruben Cunningham also came down to the Yukon River to watch the first musher make it to the coast. Ruben, 39, said it’s an annual tradition.

“It brings in a bunch of people you don’t see all year long,” he said.

Cunningham said he generally roots for mushers from the villages, and this year is a fan of Pete Kaiser and Aaron Burmeister.

Amber, 33, was impressed Waerner was doing so well in only his second Iditarod, but she hopes Jessie Royer wins. Royer was the leader going into Kaltag, where she took her 8-hour layover. Waerner, who took his eight hours back in Ruby, stayed in Kaltag for about five hours was was the first the leave that checkpoint Saturday night.

The Cunninghams said they appreciate the mushers coming in and socializing with the community. Usually, pancakes and bacon are served at the checkpoint, but this year the checkpoint is closed to the public because of the coronavirus.

It’s a bummer to be shut out, Amber said.

“We get the inside scoop,” she said of past years. “We get to hear them talking.”

As Waerner was getting ready to leave, Unalakleet resident Karl Erickson gave him some homemade Norwegian cookies. Erickson said in the past he has given the cookies to Joar Leifseth Ulsom, who won the race in 2018. But this year, Waerner got them.

“This is what happens when you are too slow,” Waerner said, flashing a grin. “I take your cookie.”

Waerner said he has some lower back pain, but otherwise he’s feeling good. He said the trail hasn’t been too challenging, and his dogs are doing well.

“They’ve been barking, screaming and having fun,” he said.

Waerner earlier in the race was running with dual lead dogs, K2 and Bark, but he moved K2 back a couple rows because the two don’t get along during breaks.

The trail headed into Unalakleet was flat, and a little boring, he said.

Waerner said he feels good going forward and isn’t daunted by the prospect of coastal wind and snow. He just hopes to see the markers, he said.

He said the gamble he took by making a 12-hour run gives him the flexibility to respond to those behind him. He’d like to take shorter runs, but said he could do a 14-hour push if needed.