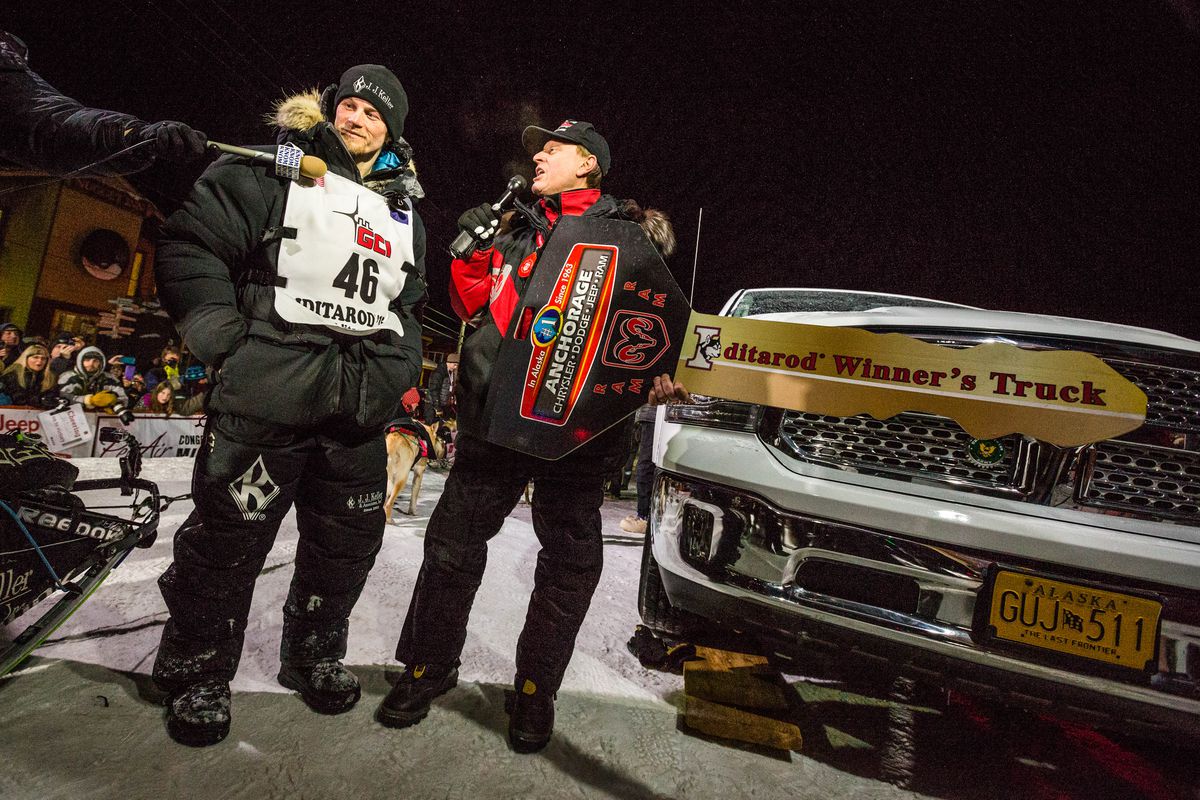 Dallas Seavey is presented with a new truck in Nome after winning the 2015 race. (Loren Holmes / ADN archive)

Dallas Seavey is presented with a new truck in Nome after winning the 2015 race. (Loren Holmes / ADN archive)

One of the Iditarod’s top sponsors is dropping financial support, the second major sponsor with Alaska ties to sever relationships with the sled dog race this month.

Fiat Chrysler Automobiles confirmed Monday that the Anchorage Chrysler Dodge Jeep Ram dealership will no longer sponsor the race. The dealership for 30 years has been one of the Iditarod’s principal partners and annually presents the race winner with a new pickup at the finish line in Nome.

A statement from Fiat Chrysler Automobiles, or FCA, noted the parent company did not sponsor the Iditarod.

“Anchorage Chrysler Dodge Jeep Ram Center — an independently owned and operated dealership — had been a sponsor of the race. We understand and can confirm the dealership will no longer continue sponsoring the race. As such, FCA and the Chrysler, Dodge, Jeep and Ram logos will no longer be associated with the race,” the statement said.

Chuck Talksy, a spokesman for the Anchorage dealership, initially said it planned to sponsor the race again next year, finances permitting.

Later, when informed of Chrysler’s statement, he said, “That’s kind of news to us. As a franchisee, we are subject to various controls."

The announcement came as mushers are making the final push for Nome in this year’s race. The nearly 1,000-mile race started March 8 in Willow with 57 mushers.

Alaska Airlines, the Seattle-based airline that got its start decades ago in Alaska, earlier this month announced it was dropping its sponsorship of the race, which has been targeted by an animal rights group.

“We will address 2021 sponsorships after the conclusion of the race,” Iditarod CEO Rob Urbach said in an email. “Our mission is solely focused on executing a safe and healthy race, and look forward to welcoming race teams to Nome.”

People for the Ethical Treatment of Animals was first to announce the departure of both Alaska Airlines and Chrysler as race sponsors. The group says the nearly 1,000-mile race across Alaska is cruel for the dogs.

PETA is the race’s biggest critic and has for years targeted sponsors. In Chrysler’s case, that includes more than a quarter-million emails from PETA supporters, television ads in the Detroit area and protesters dragging a sled filled with fake dead dogs around downtown Detroit, the organization said in a statement.

"After feeling some real pressure from PETA, Chrysler put the brakes on its connection with the Iditarod and is sending the message that dogs deserve better than being run to death for mushers' prize money,'' PETA Executive Vice President Tracy Reiman said in a statement. "Alaska Airlines has also withdrawn its sponsorship of this wretched race in which over 150 dogs have died, and we hope this year is the last year dogs will suffer in this way."

Alaska Airlines denied PETA had anything to do with its decision to drop sponsorship of the race after more than 40 years and instead said it was a change in the company’s corporate giving strategy.