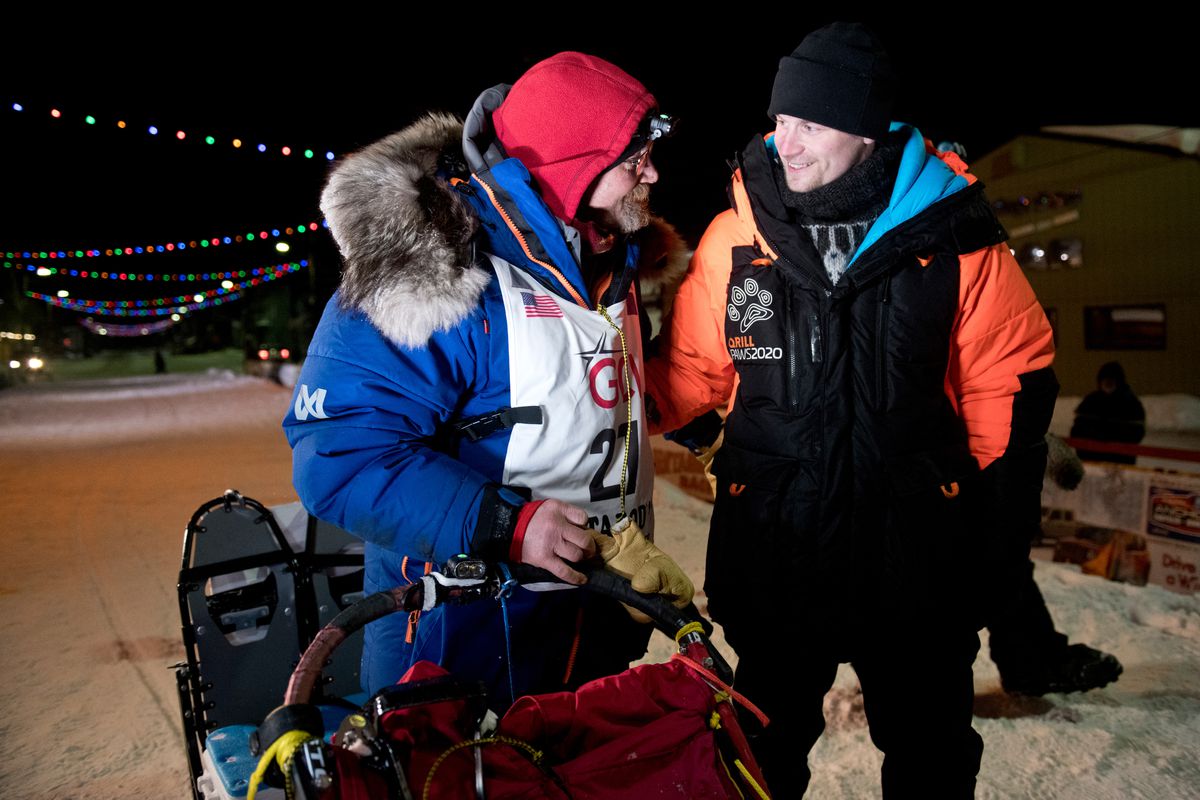 Dallas Seavey, right, greets dad Mitch Seavey at the finish line of the 2020 Iditarod. Dallas, a four-time winner who hasn't done the race since 2017, is among 57 mushers who have signed up for the 2021 race. i(Marc Lester / ADN)

Dallas Seavey, right, greets dad Mitch Seavey at the finish line of the 2020 Iditarod. Dallas, a four-time winner who hasn't done the race since 2017, is among 57 mushers who have signed up for the 2021 race. i(Marc Lester / ADN)

Four-time Iditarod champion Dallas Seavey, who skipped three straight races following the 2017 dog-doping controversy involving his team, is among 57 mushers who have signed up for next year’s race.

He’s part of a strong field that includes six champions -- among them, defending champion Thomas Waerner of Norway -- and eight top-10 finishers from this year’s 1,000-mile race to Nome.

Not among the early entries is three-time champion and 2020 runner-up Mitch Seavey of Seward, who in late April announced he would skip the 2021 race and let son Dallas run the top dogs from both kennels. Dallas, 33, relocated his kennel to Talkeetna from Willow since his last Iditarod.

The Seaveys finished 1-2 in the 2017 Iditarod, with Mitch taking the victory to end a three-race winning streak by Dallas. It was later revealed that four of Seavey’s dogs tested positive for a banned substance.

Seavey said he had nothing to do with the doping, and in December 2018, the Iditarod board of directors absolved him of any blame without saying who administered the drugs to the dogs.

Seavey skipped the three Iditarods after the controversy. He twice entered Norway’s 750-mile Finnmarkslopet, finishing third in 2018 and scratching in 2019, and he provided television commentary for the 2020 Iditarod.

Seavey’s return to the Iditarod gives him a shot at what has so far proved to be an unbreakable record -- Rick Swenson’s five victories. Six mushers have won the race four times apiece -- Susan Butcher, Doug Swingley, Martin Buser, Jeff King, Lance Mackey and Seavey.

Buser and King are both among the early entries for the 2021 race. Other champions also entered include Waerner, 2019 winner Pete Kaiser and 2018 winner Joar Leifseth Ulsom.