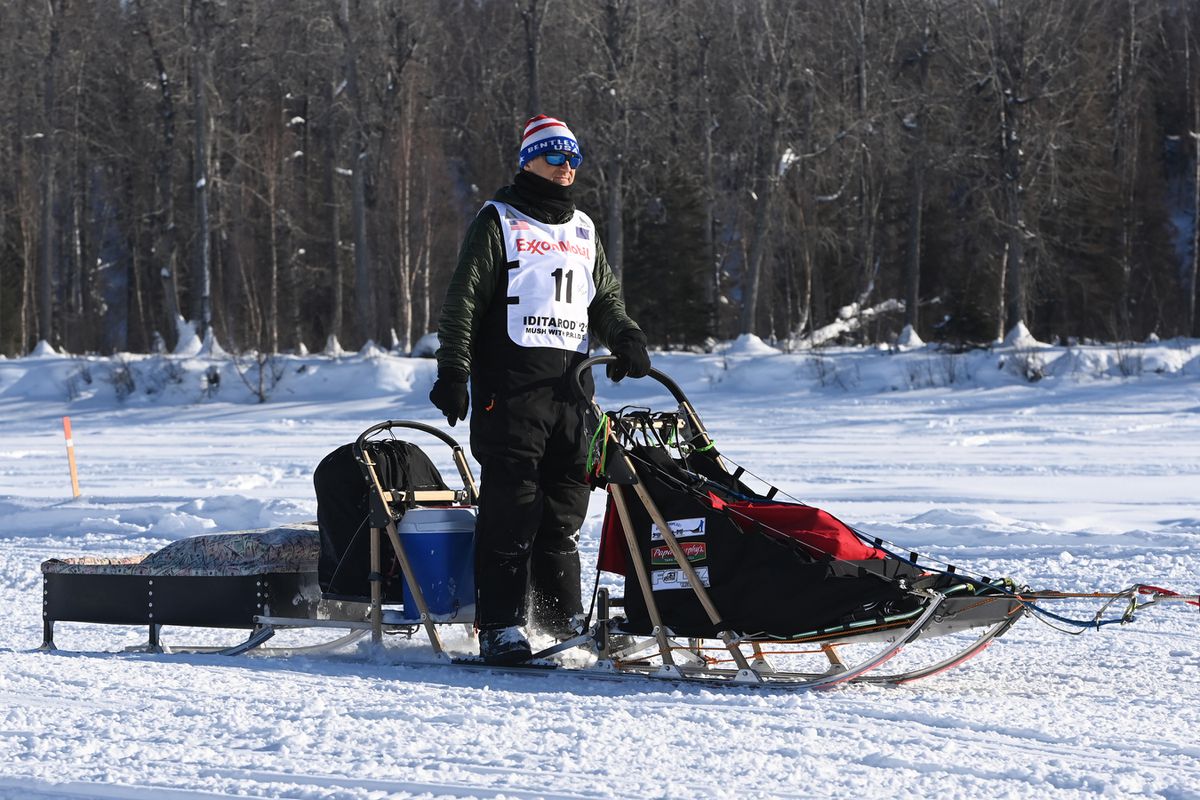 Gunnar Johnson travels down the Susitna River during the start of the Iditarod Trail Sled Dog Race on Sunday. (Bill Roth / ADN)

Gunnar Johnson travels down the Susitna River during the start of the Iditarod Trail Sled Dog Race on Sunday. (Bill Roth / ADN)

The two mushers who shared Gunnar Johnson’s tent in Nikolai had not been identified as of noon Friday, race officials said.

Additionally, COVID-19 testing is being added to two more checkpoints on the return route -- Rainy Pass and Skwentna. In-bound mushers will also be tested in McGrath.

Iditarod Trail Sled Dog Race officials are trying to identify two mushers who shared a tent at a checkpoint with Gunnar Johnson, the Minnesota musher who was pulled from the race this week after testing positive for COVID-19.

Johnson, 52, tested positive Wednesday in McGrath, a town 300 miles into the race where every musher is being tested on their northbound journey. He shared a tent in Nikolai with two mushers the previous night.

Dr. Jodie Guest — an infectious diseases epidemiologist and professor at Emory University in Atlanta who is assisting with the race’s COVID-19 mitigation plan — said race officials believe “the risk to other people on the trail is probably at a maximum of three people.”

“We’re still trying to determine the identity of two mushers who shared a tent with him at one point of time about two days ago. We have that group (narrowed) down but not finalized,” she said Thursday during a community COVID-19 briefing with public health officials. She did not say who the third person might be.

Because of Johnson’s positive result, every musher will be tested again when they pass through McGrath a second time heading south, Guest said.

Officials on Tuesday said that Johnson, who is isolating in McGrath, wasn’t symptomatic and that he didn’t come into close contact with race personnel or community members there.

[As the Iditarod prepares to shift into reverse, mushers dread what’s ahead]

Since Johnson’s positive test, 43 officials and volunteers have been tested at the Nikolai checkpoint, where Johnson spent 24 hours from Tuesday morning to Wednesday morning. All tested negative, Guest said.

She said another 14 people will be tested Thursday afternoon at Rohn, the checkpoint before Nikolai. Johnson spent about four hours at three checkpoints — Skwentna, Rainy Pass and Rohn — on his way to Nikolai, according to race standings.

“He has not been inside any buildings since he left for the start of the race,” Guest said.

Guest said Johnson’s exposure has been traced to a dog handler who rode in a vehicle with him on Friday, March 5. That person tested positive Saturday.

“It’s unusual, but we have a very specific contact that we know about,” Guest said.

The handler was among three people, including Johnson, who were quarantining together prior to the race, she said. The handler was exposed outside that bubble and tested positive for COVID-19 on Saturday. The race began the next day in Deshka Landing.

Johnson, 52, is a veteran of the 1991 and 2017 Iditarods and was running dogs from Jim Lanier’s Chugiak kennel. He was the 38th musher to reach McGrath.

“People crawl in and out out during the night, and they’re not having a lot of conversation and they’re also masked,” she said. “He’s just not sure who those two people are.”