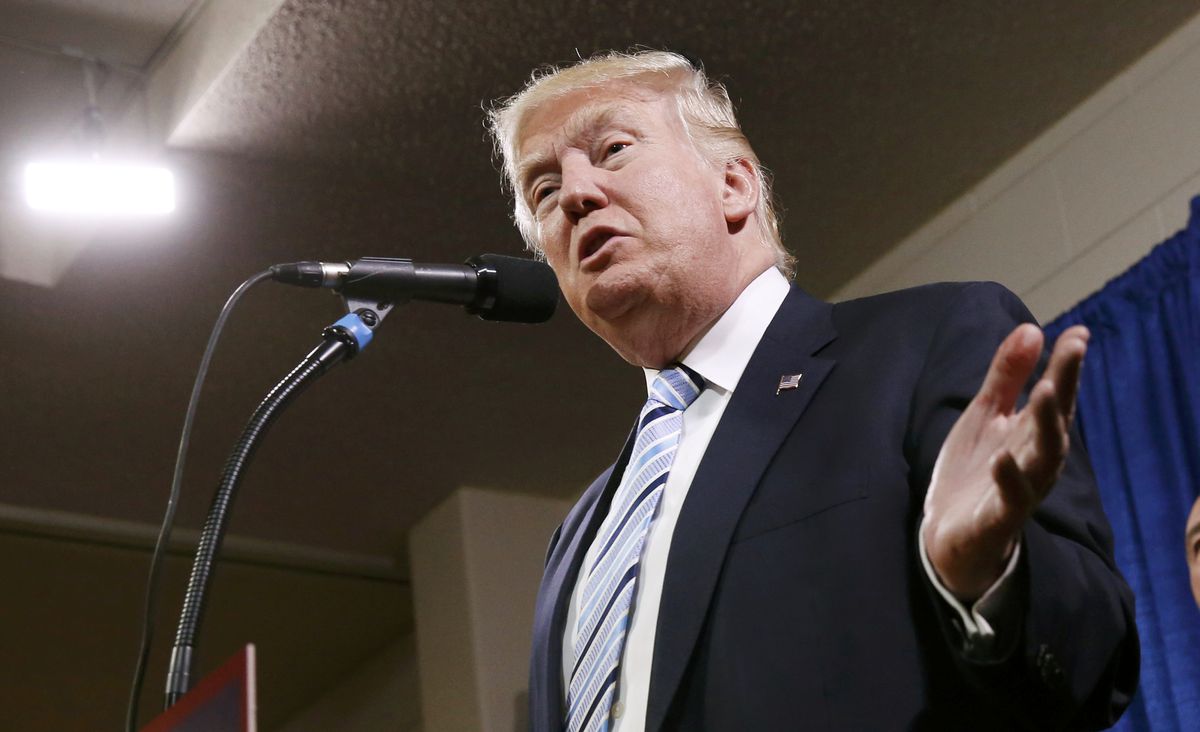 WASHINGTON — Donald Trump pledged Thursday to push aggressively for more oil drilling if he becomes president, including on federal lands in Alaska.

In an energy-focused speech in North Dakota, the Republican candidate spoke of "shared prosperity" from energy revenues, promising to use them to repair the nation's crumbling infrastructure and saying he would declare "American energy dominance" a "strategic and economic policy goal."

"President Obama has aggressively blocked oil production, and … every single move he's made is to block the production of oil and natural gas. He's taken huge percentages of the Alaska petroleum — and you take the reserve; he's taken it off the table. He's taken it completely off the table," Trump said.

That's not entirely the case. The Obama administration has granted permits to ConocoPhillips Alaska Inc. to drill in the National Petroleum Reserve-Alaska in what is known as the Greater Mooses Tooth unit on the North Slope.

Trump perhaps meant to cite the Arctic National Wildlife Refuge, which has long been off limits to drilling — a situation Obama unsuccessfully asked Congress to make permanent. Opening the refuge would first take an act of Congress, which a president could then sign or veto.

Trump offered some new promises in what was billed as his "energy policy" speech, given at the close of the Williston Basin Petroleum Conference in Bismarck. North Dakota has played a central role in the U.S. oil boom and, like Alaska, has suffered as global oil prices fell in recent years.

Oil billionaire Harold Hamm, CEO of Continental Resources, preceded Trump on the stage, putting considerable industry clout behind the candidate. Hamm, who advised 2012 Republican presidential nominee Mitt Romney on energy, came to the stage with some optimism, noting that oil prices have risen to $50 a barrel and that he expects them to top $60 by year's end.

Later in his speech, Trump said he'd take credit for the rise in oil prices.

Trump said the Obama administration has regulated the oil industry to a point that profits have become scarce. He promised to take action to allow more offshore oil drilling and drilling on federal lands.

"In a Trump administration, political activists with extreme agendas will no longer write the rules, because that's what's happening now," Trump said.

Trump said that if elected, he would craft an "America First" energy plan, eliminating oil and gas imports and boosting fossil fuel production by removing Obama administration regulations that he termed "death by a thousand cuts."

The U.S. consumes about one-fifth of the world's petroleum. In 2014, 73 percent of the nation's oil demand was satisfied by U.S. production, according to the U.S. Energy Information Administration.

Trump acknowledged that oil imports have fallen dramatically in the last decade.

"But this all occurred in spite of massive new bureaucratic and political barriers," he said.

"If crooked Hillary Clinton is in charge, things will get much worse, believe me," Trump charged.