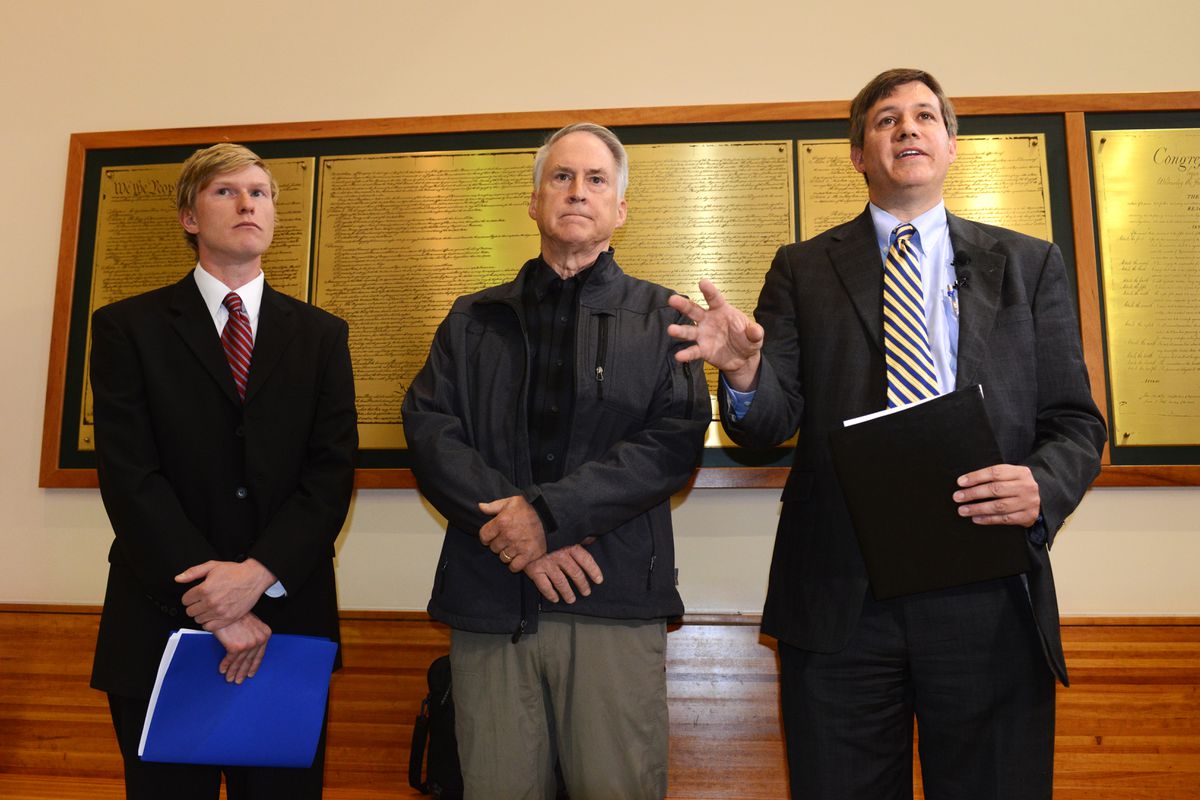 The lawsuit, filed three weeks before the annual payments are set to be made, asks for a ruling to force the state-owned Permanent Fund Corp. to transfer the full $1.4 billion originally set aside by the Legislature for dividend checks, instead of the $695 million left over after Walker's veto in June.

Checks are estimated to be about $1,000 after the veto, after being projected at more than $2,000 before. The state has not yet set the actual dividend amount.

Joining Wielechowski as plaintiffs in his lawsuit were a pair of former Alaska Senate presidents, Clem Tillion and Rick Halford, both Republicans.

The two old-timers were supporters of Walker's gubernatorial campaign in 2014, but both were also deeply involved in the Permanent Fund's creation and have fought Walker's efforts to use the fund's earnings to help fix Alaska's massive budget gap — even though that's a step that budget experts say will likely be necessary.

"It's the last place we should be going to get money," Halford said in a news conference at the Anchorage courthouse, saying he preferred higher taxes on the oil industry and an individual income tax.

[Is it legal for Gov. Walker to shrink Permanent Fund dividends?]

In addition to joining the lawsuit against Walker, Halford is also leaving the Alaska Gasline Development Corp. board. Halford said his term expired three days ago and he wasn't seeking another term. He described the gas line project, a central theme of Walker's administration, as not economically viable now.

Wielechowski, an attorney running for re-election to his East Anchorage seat this year, has been warning of a possible lawsuit since shortly after Walker's veto was announced.

In a prepared statement, Walker said Wielechowski was part of the problem.

"I'm disappointed that an incumbent legislator who failed to work towards a solution to our fiscal crisis — a solution that would protect the long-term viability of the PFD — has decided instead to pursue this lawsuit eight weeks prior to his re-election bid," Walker said. "This suit detracts from the real issue: solving Alaska's fiscal crisis so we can then begin to grow Alaska."

Walker also attacked a statement of Halford's during the Friday news conference — an assertion that since the state survived an earlier economic downturn without touching the Permanent Fund dividend, it could do so again.

"In the 1990s, we had approximately 2 million barrels of oil a day going through the Trans Alaska Pipeline System," Walker said. "Today, the TAPS throughput is about a half-million barrels a day. That's a huge difference in the potential for an economic rebound. In the 1990s, we were not facing a $3.2 billion deficit and drawing down on our savings at a rate of $12 million a day. Relying on a 1990s-type rebound is very, very risky."

Wielechowski said he and another attorney, Andrew Erickson, volunteered their time to draft the 24-page complaint.

At the morning news conference held inside the downtown courthouse — which closes at noon Fridays due to budget cuts — Wielechowski said he'd ask for an emergency ruling and hopes to get a decision before dividends are paid. But it "may take much longer," he added.

"It's late in the game," Wielechowski said.

Wielechowski said he didn't expect the lawsuit would interfere with payment of the smaller dividends. If it succeeds later, the lawsuit could produce a second payment to residents.

The resolution of Wielechowski's lawsuit will hinge on how the courts interpret state law and the Alaska Constitution.

Walker's veto, Wielechowski asserts, flouts a law that requires the Permanent Fund to annually transfer half of its available income to the state's dividend account.

That statute allows the money to flow to dividends automatically, outside the typical budget process, Wielechowski argued.

The Legislature has nonetheless appropriated the dividend money in its annual budget bill for decades, and did so this year, which state lawyers say makes the transfer subject to Walker's veto.