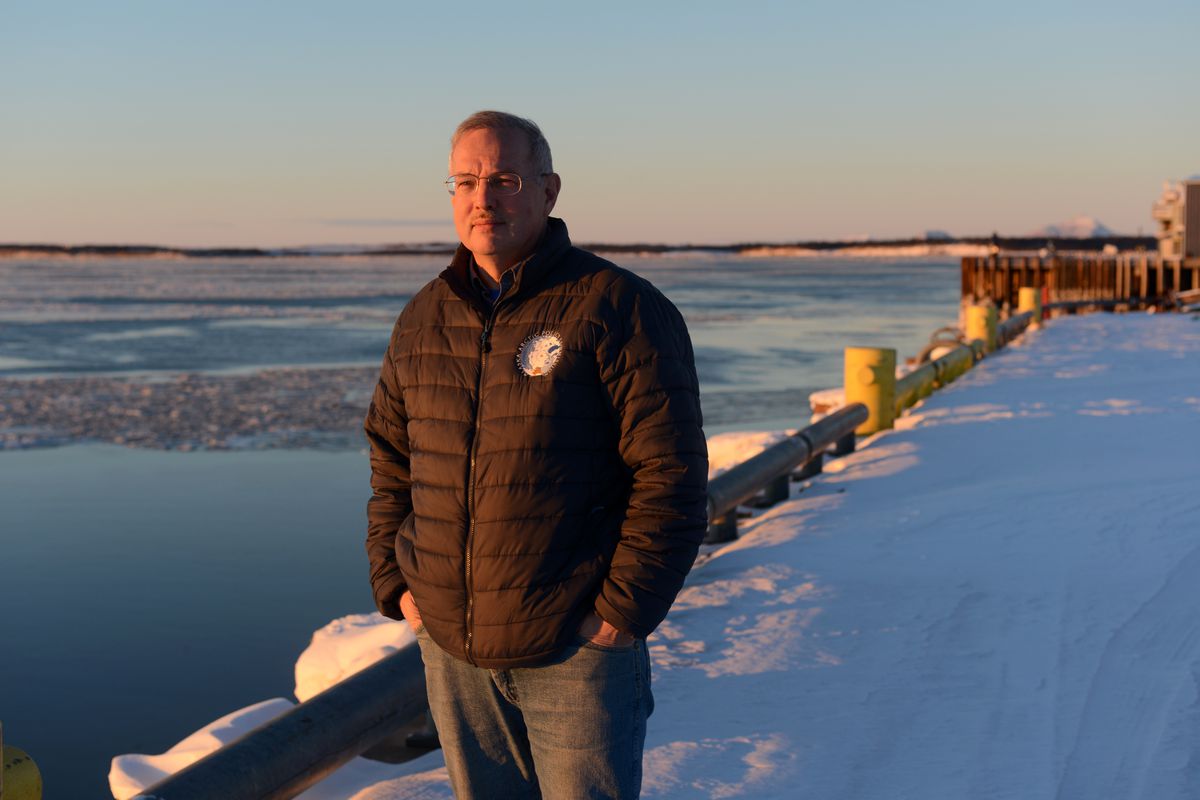 New Speaker of the House Bryce Edgmon hails from Dillingham, which sits along Nushagak Bay in Southwestern Alaska. He was photographed at sunrise at the city dock Tuesday. (Erik Hill / Alaska Dispatch News)

New Speaker of the House Bryce Edgmon hails from Dillingham, which sits along Nushagak Bay in Southwestern Alaska. He was photographed at sunrise at the city dock Tuesday. (Erik Hill / Alaska Dispatch News)

But now, with low oil prices and dwindling production drying up that revenue stream Dillingham Rep. Bryce Edgmon, who's set to become the next state House Speaker, is trying to head off a collapse in rural Alaska.

The 55-year-old Democrat, a former commercial fisherman and legislative aide who first won his seat on a coin flip a decade ago, has lived most of his life in this fishing town of 2,400.

He'll be the first speaker with Alaska Native ancestry. He keeps moose, fish and berries in his freezer. He says he's driven, in part, by a fear that the state's budget crisis could ultimately lead to the demise of his own lifestyle, and that of the rural community and district he represents.

"In some ways, this fiscal challenge in front of us is personal," Edgmon said. "I know it's not only my children and maybe their children's future, but it's also the future of our way of life out here in rural Alaska and a lot of our Native villages."

The normally taciturn Edgmon laid out his personal history and political philosophy in a series of interviews in his Southwest Alaska hometown over two days last week — much of it spent behind the wheel of his tidy Toyota pickup, from which he narrated a driving tour of Dillingham, its people and surrounding landscape.

Edgmon's position in a new majority coalition of House Democrats and moderate Republicans was announced the day after last month's election — part of a reorganization of the chamber that ended more than two decades of GOP control.

Edgmon, who has joined Republican majorities for the last eight years, used to hold a spot on the 11-member House Finance Committee, where seats are coveted because of the ability to direct state spending to local projects. Now his new job puts him atop the entire 22-member coalition.

It's a move that parlays his centrist politics into a leadership position as did the philosophies of his predecessors, legendary rural Alaska Native lawmakers like Frank Ferguson, Al Adams and John Sackett — not to mention Bethel Democratic Sen. Lyman Hoffman, one of the next co-chairs of the Senate Finance Committee, whose district includes Edgmon's House district.

Bush legislators like Sackett, Ferguson and Adams used their longevity, savvy and political flexibility to form coalitions with both parties — often placing themselves in leadership positions from which they could steer state spending to rural priorities like schools, roads and sewer and water systems.

Edgmon follows in the same tradition. Except now, with the state facing a multibillion-dollar deficit, he's trying to fend off proposals from road system politicians to cut spending on existing rural programs and priorities.

Like others across Alaska, his district has seen millions of dollars of state money invested in infrastructure and construction projects, largely bankrolled by oil revenue. Edgmon's 20-mile drive between Dillingham and the 225-person village of Aleknagik took this reporter around to the state-owned airport, past a state trooper, and across a new $28.5 million bridge paid for with state and federal money.

But the Republican-led Legislature and Gov. Bill Walker, an independent, in the last two years have slashed money for heating subsidies, regional jails, law enforcement and the state's public radio network. They've also contemplated more than doubling the minimum enrollment for schools to qualify for full state funding, which rural advocates say could shut down dozens of schools and cripple the small communities that have grown around them.

"The middle part of the state has no appetite for revenue," Edgmon said, referring to the preferences of some of his colleagues in the Railbelt for deep spending reductions before taxes or a restructuring of the Permanent Fund.

He added: "We've spent so much time and effort, human capital and political capital when we had it, in gearing up our communities to meet basic needs. And now we're at the precipice of not even having the wherewithal, throughout the state, to fund the operating costs."

While Edgmon may hold his own beliefs strongly, Eagle River Republican Sen. Anna MacKinnon said she hopes he'll understand how people from different parts of the state have different ideas about solving Alaska's budget crisis.

She said she thinks the Senate majority is likely to have less enthusiasm than the House for levying a statewide income tax and tinkering with its oil tax regime. But she expects to have a good line of communication with Edgmon, with whom MacKinnon served while she was a House member.

"I don't think that we've ever had a cross word," she said in a phone interview. "I think I respect his opinion and he respects mine, and I've seen that carried over in all relationships that he's had."

The new Senate president, Pete Kelly, was more blunt in a message.

"Bryce is a good guy. I'm sure we'll get along fine — until we don't," said Kelly, a Fairbanks Republican.

Edgmon has worked in the state Capitol through both wealthy and lean times, starting in 1989 when he first worked as a legislative aide.

Edgmon's family hadn't been involved in politics. He worked as a commercial fisherman and was the only one of five children to graduate college — most of his siblings didn't finish high school, and three have battled drug and alcohol addictions and have been in and out of prison.

His hiring as an aide came after a chance encounter at University of Alaska Anchorage with George Jacko, another Native lawmaker.

Jacko was running for the state House, and he needed a campaign contact in Dillingham. Edgmon agreed to do it, and was offered a job when Jacko won the race.

For the next decade, Edgmon split his time between commercial fishing in Dillingham and working in Juneau. He moved to the offices of Nome Rep. Richard Foster and Unalaska Rep. Carl Moses, both Democrats, after the Senate censured Jacko for seeking sexual favors from young women, including at least one aide. (Edgmon said he and other Jacko aides were "just as shocked" about the senator's behavior as everyone else.)

In 2006, Edgmon challenged Moses in the Democratic primary, pushed to run by friends and community leaders because of Moses' openness to the proposed Pebble mine — a project opposed by many Natives and commercial fishermen. A tie vote, 767 for each, dictated a coin flip under the law. Edgmon won when Moses called heads and the coin landed on tails.

Edgmon describes himself as pulled between two different lives — one rural, one urban. His birth certificate identifies him as three-sixteenths Aleut, but, Edgmon says: "My soul is a lot more than a mere quarter of Alaska Native blood."

His grandmother has roots tracing back to the upper Kuskokwim River area, and Edgmon was raised in a household where Yup'ik words and phrases were used to describe foods and activities.

"It's such a huge part of how I am, how I view the world," Edgmon said.

But his own rural lifestyle, and that of the residents of the more than 40 Southwest and Aleutian communities in his district, are getting squeezed by the state budget crisis.

In his back pocket, Edgmon keeps a tattered two-page printout he pulls out for conversations with constituents in grocery stores and pickups.

The printout, a table and bar graph, shows the state's primary savings account, the Constitutional Budget Reserve, will be close to empty in June.

Also shown is that the next largest savings account — outside of the Permanent Fund's investment earnings — is the $1 billion Power Cost Equalization Fund, which helps pay rural Alaskans' electric bills.

Edgmon uses the pages to explain why he sees a restructuring of the Permanent Fund as almost certainly necessary, which will likely come with a corresponding reduction of the PFD checks many in his region rely on.

He has crisscrossed his district to convey the scope of the budget crisis, even as he says some of his colleagues on the road system could have done more to educate their own constituents.

Edgmon brought David Teal, the Legislature's budget analyst, to speak in Dillingham, took state Revenue Commissioner Randy Hoffbeck to Unalaska and Bristol Bay, and held his own forums in King Salmon, the Interior community of McGrath, and Sand Point, off the Alaska Peninsula.

"Underlying all of this is a fear, as rural Alaskans, that we probably have one of the most tenuous roads in front of us," said Van Vactor. "There are so many things we're so dependent on the state for help with. And yet we don't have the votes."

The debate over state spending on rural programs and services is a needed one, said Wasilla Republican Rep. Lynn Gattis, who originally floated the idea to increase Alaska's minimum school size.

Gattis, who lost a bid for state Senate in this year's Republican primary, once lived in Dillingham, and she sat next to Edgmon on the finance committee.

But she said in a phone interview that some Alaskans are tired of paying "for what somebody else isn't," citing the services in some rural areas that are covered by the state and federal governments, such as schools and health care, while residents of organized cities and boroughs have to pay property and sales taxes.

"They want, want, want, but they're not participating," Gattis said. "I don't say that either side is wrong. I'm just saying that you can't whine a whole bunch more without paying for it."

Edgmon is careful not to directly criticize any of his colleagues; he's a cautious speaker and says lawmakers can get more things done by working in the background than by publicly posturing.

As speaker, Edgmon said he hopes to tap his existing relationships with Republicans from the eight years he spent in their majority caucus. His friends and colleagues say he gets along with just about everyone.

"I'm sure there's someone who doesn't like him — I just don't know who it would be," said Dillingham Mayor Alice Ruby, who's known Edgmon since childhood.

One other asset for Edgmon: He knows his way around a guitar. He's recorded several albums-worth of material, including a 1999 CD, "One Heart, Two Worlds," and once played a prom in the village of New Stuyahok. (His trio, Edgmon said, played each of the nine songs in its repertoire three times.)

Jam sessions are a welcome diversion at the Capitol, and Edgmon claims credit for naming a weekly gathering in the office of Foster, the former Nome representative: "Fridays at Foster's."

Playing music, Edgmon said, helps cement relationships between lawmakers, aides, and agency staff, and makes it easier to work across party lines — which could be no small thing given that Kelly, the incoming Senate president, plays drums.

"Music is the one language that speaks to everyone," Edgmon said.