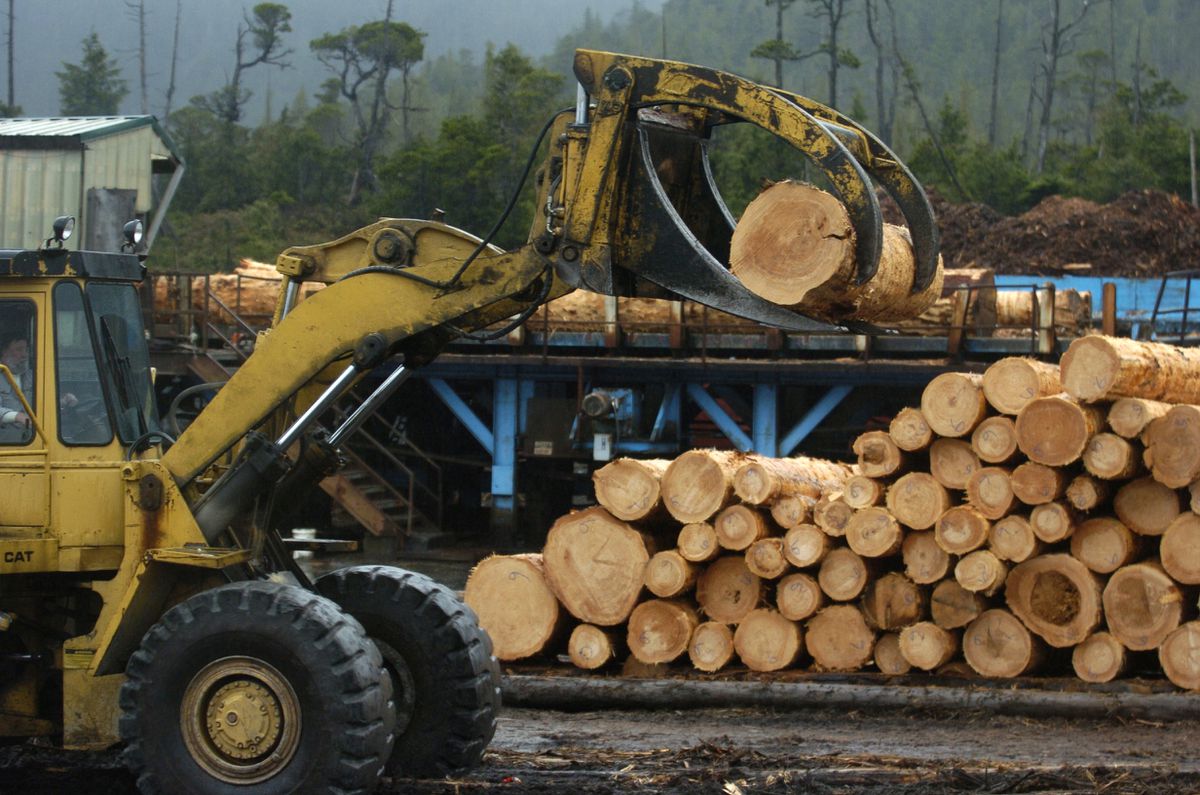 Logs are stacked after being stripped of their bark at Steve Seley’s mill on Gravina Island near Ketchikan in December 2005. (Marc Lester / ADN Archive)

Logs are stacked after being stripped of their bark at Steve Seley’s mill on Gravina Island near Ketchikan in December 2005. (Marc Lester / ADN Archive)

WASHINGTON — The Obama administration has issued a final amendment to the Tongass National Forest management plan that aims to phase out cutting of old-growth timber and encourage only cutting of "new growth" in the coming years.

The U.S. Forest Service released the plan, which will go into effect Jan. 8, on Friday. But some environmentalists said the plan moved too slowly, while pro-development groups and Republican lawmakers argued that it requires an impossibly fast industry transition.

Alaska's all-Republican congressional delegation was unified in their outcry against the decision, saying it would have serious negative consequences for the region's economy. They pledged to look for ways to overturn it.

The new plan for the Tongass, the nation's largest national forest, is central to the fight over the future of logging in Alaska. The Tongass encompasses nearly 17 million acres and contains cedar, spruce and hemlock trees, as well as brown bears, salmon, wolves, bald eagles and other wildlife.

The new rule has been years in the making. It amends a 2008 rule, after a 2012 rule set the stage for the planning amendment.

[Old friends clash in battle over old-growth logging in Tongass]

"Thankfully, the Obama administration has only weeks left in office, after which we can turn this decision around and bring active management to our federal forests for the benefit for Alaska and America's economy," said Alaska Sen. Dan Sullivan. Sullivan said the move was one of many by the administration and environmental collaborators to "kill off the last remaining timber industry in the Tongass."

The amendment is part of a multiyear effort by the Forest Service to speed the transition away from old-growth timber sales. "Old-growth" refers to forests that have never been cut down. The lumber can be harder to get to, and environmentalists worry about the impact cutting such forests has on the environment, including on other species. But it is available for the cutting and generally of higher quality.

Environmental groups like the Audubon Society have been pushing for a much faster end to old-growth logging, in three to five years, which the groups say is necessary to protect wildlife and salmon runs.

The timber industry, meanwhile, argues that the protective behavior of the Forest Service belies its intent — to foster working lands that supply the nation with needed timber.

The Alaska Forest Association and the Southeast Conference told the Forest Service that the economics behind the rule "are faulty and well over-estimate the value that the industry can get from allowed timber harvesting in Southeast Alaska."

Just 400,000 acres out of 9.5 million forested acres have been harvested in the Tongass in nearly 90 years, according to the Alaska Forest Association. Much of the national forest is closed to development — untouchable wilderness areas, national monuments and areas where roads are not allowed.

The new plan accelerates the switch to new-growth forests. In 2008, the forest plan gave a 32-year timeline for the changeover. Eight years later, that timeline was shortened to 16 years. Overall, that's an eight-year speed-up.

"Under this new management plan, Southeast will not have enough young growth timber to supply even one single sawmill," Young said.

He argued that the rule would not only harm timber harvests in Alaska but set a nationwide precedent favoring new-growth forests over old.

The congressional delegation has said that any changeover should wait for an inventory of what new-growth forests are available to the industry. Young previously passed legislation out of the House Natural Resources Committee that would put a hold on the amendment until there's a full inventory of young-growth timber taken in the Tongass forest. He said he would continue to fight for its passage.

"The Forest Service's insistence on locking in an accelerated transition to a young growth program without an inventory to show whether that is even possible is both harmful and misguided. And the timber industry is not the only one threatened by this plan – so, too, are energy development, mining and others," said Sen. Lisa Murkowski.

And the "Forest Service also fails to provide a clear understanding about where the wood for bridge timber will come from during the transition," the delegation said in a group statement.

The supervisor for the forest has said that 50,000 acres will be inventoried by 2018.

The draft plan, released in July, drew more than 165,000 public comments. The Forest Service consulted with the U.S. Fish and Wildlife Service, Alaska Native tribes and corporations, the Tongass Advisory Committee and a federal advisory committee established by the Department of Agriculture, and it held nine open-house meetings and nine "subsistence hearings," the agency said.

Environmental groups that support moving the timber industry away from old growth said it is necessary to support fishing and tourism industries in the region.

"The plan amendment protects key places that support economic activity in fishing and tourism, and ensures that these places and the region's abundant wild salmon will continue to support Southeast Alaska's economy," said Kristen Miller, conservation director for the Alaska Wilderness League.

"However, the timeframe outlined in the final plan drags the process on for too long," Miller said.

But environmentalists largely praised the decision in the plan to keep one area of the Tongass, known as "Tongass 77," off limits to logging. That decision was "a major step toward safeguarding fish and wildlife across wide areas of the Tongass National Forest," said Mark Kaelke, Southeast Alaska project director for Trout Unlimited.