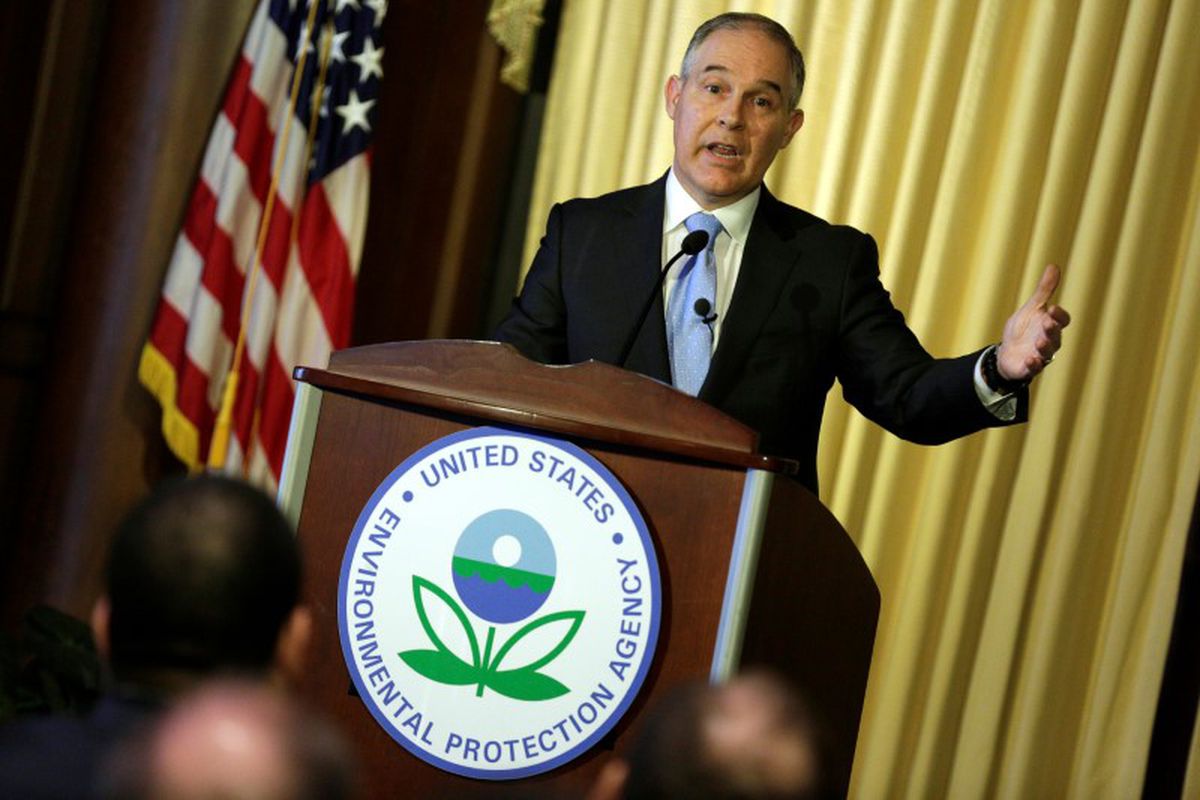 Scott Pruitt, administrator of the Environmental Protection Agency, speaks to employees of the agency in Washington, D.C. Feb. 21. REUTERS/Joshua Roberts

Scott Pruitt, administrator of the Environmental Protection Agency, speaks to employees of the agency in Washington, D.C. Feb. 21. REUTERS/Joshua Roberts

WASHINGTON — Potential budget cuts aimed at the U.S. Environmental Protection Agency could pull millions of dollars for drinking water and wastewater initiatives from Alaska, slowing the progress of potable water in villages, and limiting efforts to adjust to climate changes.

But ultimately, any cuts will have to make it past Congress.

The EPA's fiscal year 2017 budget is $8.6 billion, supporting roughly 15,000 employees. But only a small portion of that funding goes to staff — much of it goes directly to states, tribes and territories through the clean water and drinking water state revolving loan funds, and a variety of grants.

In Alaska, that amounted to just more than $78 million in fiscal year 2016. It's a drop in the national spending bucket, but supports major infrastructure and research projects in the state.

If the administration's "proposal goes forward without change, this would significantly impact environmental programs in Alaska," said Candice Bressler, spokesperson for the Alaska Department of Environmental Conservation.

EPA is the 12th-ranked federal agency for spending in Alaska, according to USAspending.gov. The top spender, the Department of Health and Human Services, spent $2.2 billion in Alaska in fiscal year 2016. The top 11 federal departments — including the Social Security Administration and Interior and Veterans Affairs departments — spent more than $7.6 billion in Alaska that fiscal year.

Despite its lower budget, the EPA has delivered a lot of money to Alaska. Over the last 10 years, the state and tribal assistance grant program has sent more than $175 million to the state for a variety of projects.

Right now DEC has $18.2 million in active operating grants from the EPA, according to Bressler. EPA funding represents about 18 percent of DEC's projected spending for the 2017 fiscal year, and about 62 percent of the agency's total operating federal revenue.

"Outside of the operating budget, Village Safe Water currently has $37.6 million in EPA grants, and the Alaska Clean Water and Drinking Water Loan Funds currently have $28.1 million in fund capitalization grants," Bressler said.

DEC hasn't heard anything from the White House about the EPA budget proposal yet, Bressler said, other than news reports about the ongoing deliberative process.

Right now, White House officials are negotiating with federal agencies on how and where the Trump administration should cut spending in its proposed federal budget.

The Trump administration is considering dropping EPA's annual budget to $6.1 billion, from $8.2 billion.

In reality, the administration's budget proposal is only a suggestion to Congress, which, per the U.S. Constitution, holds the purse strings. Any budget deal to bolster defense spending will have to involve wooing Democrats and reaching a 60-vote filibuster threshold in the Senate, where Republicans hold a 52-seat majority.

Determining just how a 20 percent cut to the EPA budget might apply to Alaska is a difficult charge. Spokespeople for DEC and the EPA regional office that oversees Alaska couldn't point to a line-item budget to show exactly what could be cut for the state.

One part of the cuts to which Congress has seemed most amenable is trimming EPA's overall staff. The agency currently has 15,000 employees, down from 17,000 in fiscal year 2012. Reports suggest the Trump administration may want to see one-fifth of them gone — dropping the staff level to 12,400 employees nationwide.

Other programs on the chopping block include EPA's Office of Research and Development, which could lose 40 percent of its budget, a $50 million grant program for scientists at universities, and a variety of programs, such as those aimed at improving air quality.

Reports say state grants could be cut by 30 percent — trimming millions of dollars from Alaska spending.

And the administration could propose eliminating entire programs — cutting climate change programs and zeroing out $20 million in funding for Alaska Native villages.

That likely means the Alaska Native Villages Water Program, which assists villages with the costly installation and upkeep of drinking water and wastewater systems, moving them away from the honeybuckets still used in many Alaska communities.

Programs that could be significantly scaled back or altogether cut manage things like "village safe water, wastewater infrastructure, rural sanitation, brownfields, air, water, pesticides, drinking water, remote maintenance workers," and coastal grants, Bressler said. "Many of the communities that would be most affected by the cuts are in rural Alaska with a high proportion of Native Alaska citizens."

But that seems an unlikely result, given the reality of the budget process in Congress. Whatever funding EPA gets has to go past the chair of the appropriations committee that oversees EPA: Alaska Republican Sen. Lisa Murkowski.

Last year, Murkowski got $20 million for the Alaska village water program included in the budget.

"There is no question that there is room to make cuts to portions of the EPA's budget," Petersen said. But she noted: "Cutting the EPA budget by a further 20 percent might prove to be more difficult than it sounds once you begin to dissect what funding will be reduced."

"In Alaska we've been hit hard by overreaching, burdensome EPA regulations, but we also know there are programs within EPA that have benefited our state, such as the Alaska Native Villages Water Program and the Clean Water and Drinking Water State Revolving Funds," Petersen said.

Murkowski will look closely at the Trump budget, Petersen said, and find where cuts can be made.

"At the same time, she will work to maintain critical programs that enable the EPA to do its job, ensuring we have clean air and water," she said.