What the House health care plan means for Alaska 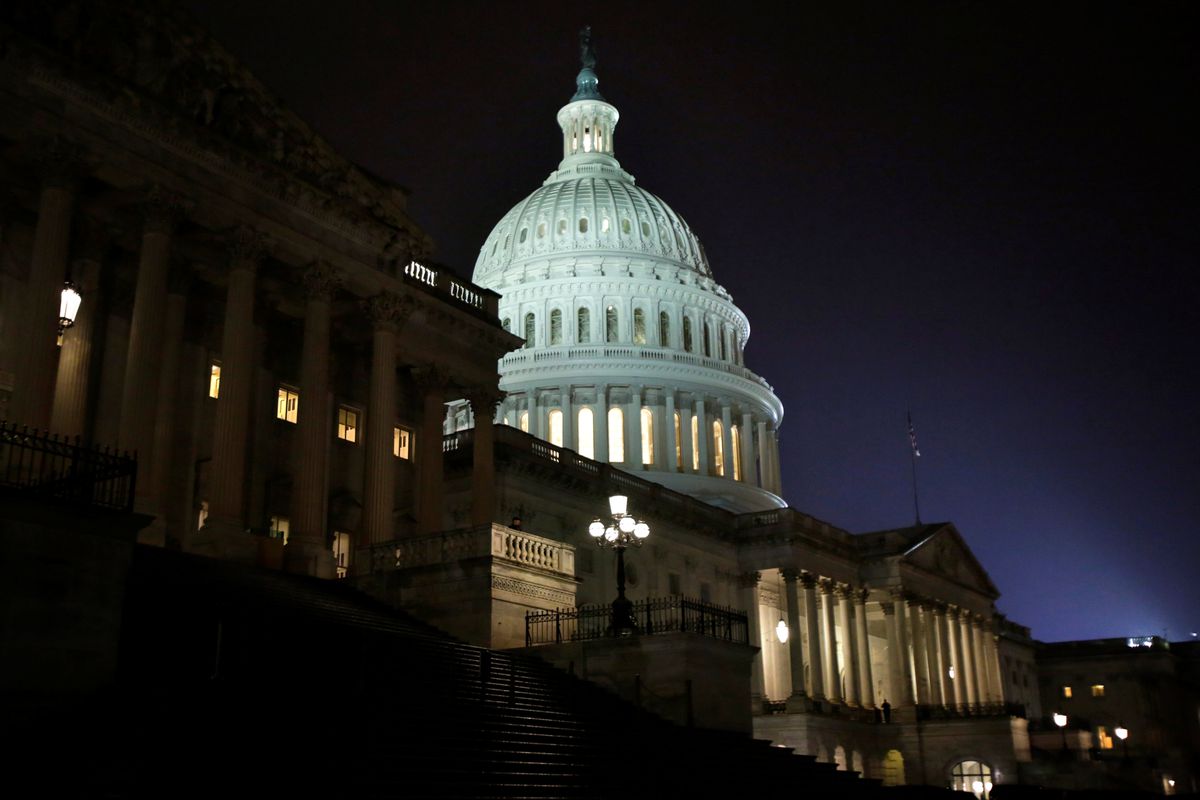 WASHINGTON — The high personal cost of some Alaskans' health insurance could get even higher under the U.S. House-proposed replacement for the Affordable Care Act, according to the Center for Budget and Policy Priorities.

The House is moving forward on legislation designed to repeal and replace the ACA, commonly referred to as "Obamacare," and lawmakers on both sides of the aisle are still working out what to make of it.

The three members of Alaska's all-Republican congressional delegation said they are taking a wait-and-see approach as they dig into the material.

Sen. Lisa Murkowski raised early objections to the potentially large cuts to Medicaid expansion and a ban on Planned Parenthood funding, but said in an interview with Alaska Dispatch News that she's "not going to be drawing any bright lines" yet in terms of conditions for winning her vote.

While the House bill moved through two committees this week, the official "score" from the Congressional Budget Office won't be out until Monday, detailing the likely costs of the plan and what impacts it will have to the number of insured people nationwide.

The House Budget Committee will review part of the bill next week, and it may move to the U.S. Senate for consideration within a month.

Early review of the complicated legislation indicates a big impact in Alaska, which already has the highest health insurance costs in the nation.

Subsidies will be erased and replaced with tax credits that don't take into account local costs. The state would also lose public health funding and would ultimately have to shrink its newly expanded Medicaid program.

"Alaska would be the hardest-hit state in the nation under the House Republican health plan," said Trevor Storrs, executive director of the Alaska Children's Trust. He also leads a coalition of organizations fighting the ACA's repeal: Protect Our Care Alaska.

"Not only would it put coverage and care out of reach for thousands of Alaskans, it could put our entire individual market for health insurance at risk," he said.

To be sure, health insurance premiums are already high in Alaska. In 2017, premiums on the exchange went up an average 29 percent in Alaska to $760, according to the Department of Health and Human Services. (The data is for a 27-year-old on the "silver" plan, the second lowest in cost.)

The Center for Budget and Policy Priorities says in Alaska, tax credits for insurance buyers are likely to drop dramatically for lower-income Alaskans.

The new plan will offer tax credits for buying insurance, but those credits are one-size-fits-all across the U.S., divided by age and income. Unlike the current plan, the proposed new law wouldn't take into account the actual costs of premiums in Alaska, which are again, the highest in the U.S.

Mark Regan, of the Disability Law Center of Alaska, said what is usually called a "subsidy" under the ACA is really a "refundable tax credit," which functionally works like a subsidy. The government "gives you (or your insurer) money even if you don't owe taxes," he said.

For now, that's also true of the House bill to replace the ACA, Regan said. "Their tax credit is refundable, so it amounts to a subsidy. It's just not as useful a subsidy as the ACA's, because it doesn't give more assistance to lower-income people who need more assistance in order to buy coverage."

Currently, the ACA makes insurance companies reduce deductibles for people whose family income is below 250 percent of the poverty line. Then insurers get money to reimburse them for that reduction.

The House plan keeps some of that, but not all. The requirement to reduce deductibles will be gone.

"If all you could afford was a low-premium plan with enormous deductibles, then that's what you would get, and the government wouldn't help you with the deductibles," Regan said.

The tax credits to help defray insurance costs will fall dramatically in Alaska, according to the policy priorities center — by an average of 78 percent, $10,243.

Nationwide, tax credits would fall an average of 36 percent, or $1,700. The difference is because the current law takes localized prices into account.

Right now, Alaska has "by far the highest per-person premium tax credits in the country, averaging $11,595 per marketplace consumer on an annualized basis for 2017," according to the report.

"Under current law, a 45-year old with income of $22,000 could purchase benchmark health insurance coverage for $1,200 or less anywhere in the country. Under the House plan, he/she would pay at least $11,800 to purchase comparable coverage in Alaska," according to the CBPP.

The House plan doesn't take location into account — all Americans would get the same tax credits, varying on age and income. It would range from $2,000 for people under 30 years of age to $4,000 for people over 60.

The House bill would also roll back Medicaid expansion in Alaska, which was one of 31 states — in addition to Washington, D.C. — to expand Medicaid under the ACA. The expanded program adds people whose incomes are less than 138 percent of the federal poverty line: $16,643 for an individual, $33,948 for a family of four.

Early in the week, Murkowski and several other Republican senators expressed concern about the House plans to cut Medicaid programs in a letter to Senate Majority Leader Mitch McConnell, R-Ky.

"We are concerned that any poorly implemented or poorly timed change in the current funding structure in Medicaid could result in a reduction in access to lifesaving health care services," the senators wrote. "The Medicaid population includes a wide range of beneficiaries, many of which cycle on and off Medicaid due to frequent changes in income, family situations, and living environments," the letter said.

The senators said Medicaid should "be reformed," but not in a way that costs coverage for "our country's most vulnerable and sickest individuals."

More than 27,000 Alaskans have been added to the Medicaid program in Alaska since eligibility was expanded in September 2015, by Gov. Bill Walker. In mid-2016, more than 155,000 people in Alaska were covered by Medicaid and the Children's Health Insurance Program, known as CHIP, according to the state.

The House plan would continue Medicaid coverage as is until 2019, after which point it would cost 2.8 to 5 times more to enroll new citizens, according to CBPP. States would bear that cost, or be forced to shrink the number of people covered by Medicaid.

That cost hike includes Medicaid enrollees who leave and seek to return to the program after a month or more. People who go without coverage for more than two months would be penalized with higher premiums and personal costs under the proposed new law.

Many people only use Medicaid for brief periods, so that could get costly, quickly. Most people taking on federal assistance use it for less than three years, according to the Census Bureau.

'Doing nothing is not an option'

Members of Alaska's congressional delegation haven't decided how they'll vote on the plan yet, particularly while the House committees continue to offer amendments and changes to the bill.

"I have been digging into bits and pieces of it, and what we've been doing a fair amount of — my health care team — reaching out to the folks back in the state," Murkowski said in an interview.

One of her big concerns with the bill, at first glance, is that Alaska remains the highest cost state in the nation. She said she recognizes "the tax credits that are being proposed … in a state like Alaska are not going to be as helpful as the credits that are available currently."

But "the beautiful thing for me right now is the House of Representatives is going through all this and we're going to see where they take it," Murkowski said.

Given that, the senator said she's not ready to name any issues — including Medicaid expansion — on which she'd hold her vote for passage.

"First and foremost: Doing nothing is not an option," said Sen. Dan Sullivan's spokesman Mike Anderson. Sullivan was pleased to see the House plan includes a repeal of individual and employer mandates, while keeping a requirement that insurance companies provide coverage for people with pre-existing conditions, and allow young people to stay on their parent's insurance until they are 26 years old.

"The senator has concerns, particularly over the costs on the individual market and he's working hard to address those concerns," Anderson said. "But Alaskans need to understand that the American Health Care Act is the first part of a long, multipronged process — with the goal to ultimately open up competition and drive down health-care costs especially for our small businesses and middle class, as well as continued health care for the most vulnerable Alaskans," he said.

Sullivan and Murkowski both said they are gathering information and reaction from Alaskans on the specifics of the legislation.

The current system is "unsustainable and on the verge of total collapse," Rep. Don Young, R-Alaska, said after the release of the House legislation this week.

"We've seen it at home and across the nation — skyrocketing premiums, soaring deductibles, the loss of all but one insurer in Alaska and a third of U.S. counties — all of which have eliminated access and forced countless families to make the tough decision to forgo health insurance entirely," Young said.

The congressman said he is reviewing the House proposal to "determine whether it supports the goals of reforming our health-care system in a manner demanded by the Alaskan people; one focused on patient-centered reforms, flexibility and added choice."

Like the senators, Young said he continues to listen to what Alaskans say about ways to "improve this legislation in areas it falls short."