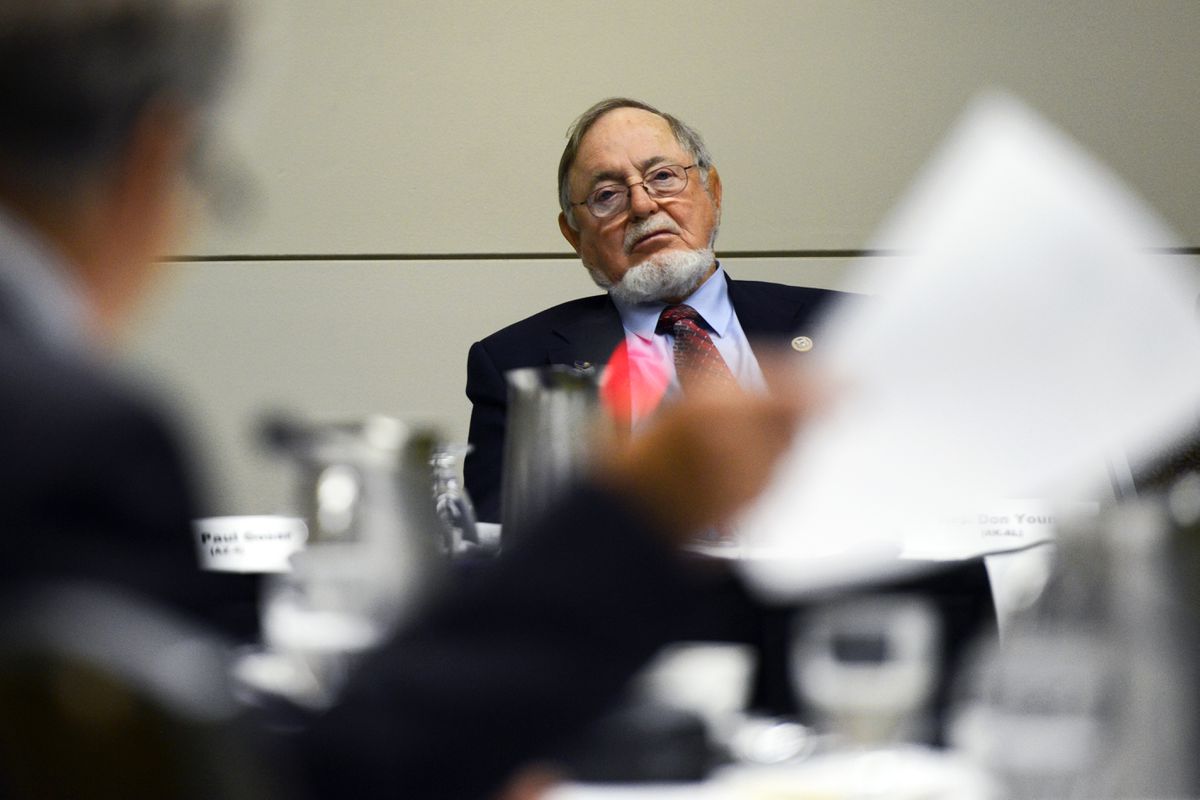 Rep. Don Young listens to a presentation by Charles Treinen, a board member of United Fisherman of Alaska, during a Western Caucus Foundation Alaska Roundtable held Thursday at the Dena’ina Civic and Convention Center. (Erik Hill / Alaska Dispatch News)

Rep. Don Young listens to a presentation by Charles Treinen, a board member of United Fisherman of Alaska, during a Western Caucus Foundation Alaska Roundtable held Thursday at the Dena’ina Civic and Convention Center. (Erik Hill / Alaska Dispatch News)

Alaska Rep. Don Young has spent the week guiding some of his fellow Republican members of Congress around some of Alaska's natural resources, and the group said they're ready to act to make drilling and mining more accessible in Alaska.

Young and four other members of the congressional Western Caucus joined with representatives of oil, gas, timber, fish, Alaska Native corporations and other industries in Anchorage on Thursday to discuss just what Congress could do to encourage more production in Alaska.

The industry representatives and Republican lawmakers agreed on the overall plan: Get the federal government out of the way. For the lawmakers, that meant naming names of troublesome bureaucrats.

The industry groups spoke of reforming regulatory programs and paring back the power of agencies and environmental groups.

Young convened the group at the Dena'ina Center downtown after travels to the North Slope to check out facilities run by ConocoPhillips and BP, the Arctic National Wildlife Refuge and Pump Station No. 1, start of the Trans-Alaska Pipeline System.

The group also visited the Fort Knox Gold Mine outside of Fairbanks. Afterward, some of them headed south for a fishing trip this weekend.

At the close of a panel on oil, gas and mineral resources, the caucus chairman, Rep. Paul Gosar, R-Ariz., urged industry officials to name names when it comes to difficult federal employees.

"We need to know who the offensive people are that are stymieing the applications. … We need names," Gosar said. "We need who they are. It doesn't help us if we don't, because if people are not held accountable you can't make things happen."

Gosar gave an example of a federal official in Lake Havasu City, Arizona, who was ultimately removed from his position, according to the congressman.

Darrell Henry, executive director of the Western Caucus Foundation, told people in the room they could route that information through the organization and it would be disseminated to members.

Sarah Erkmann Ward, external affairs manager at the Alaska Oil and Gas Association, told the lawmakers there is plenty they can do back in Washington, D.C., to help Alaska's struggling oil and gas industries.

First, she suggested help in streamlining and organizing the permitting process. "There needs to be some level of oversight" from Congress, Ward said, noting that at times, various federal agencies release conflicting orders and requirements for projects.

And she asked for more "certainty" in the permitting process, so companies could be more certain about their goals to justify investing billions of dollars.

Deantha Crockett, executive director of the Alaska Mining Association, echoed this concern, but reported that the current administration appears to be working on offering regulatory and permitting help for the industry in Alaska.

Ward also raised concerns about the Endangered Species Act, which she argued is used by groups and individuals to obstruct development, by focusing on far-off possibilities for currently healthy animals.

"We need better science than that," Ward said.

Crockett asked the congressmen to support legislation to reform the National Environmental Policy Act, which requires environmental reviews to be done on projects that have federal ties, via land or funding or some other route.

Environmental Impact Statements started out at around 300 pages, and now run 2,000 pages each, with a broader scope than originally included, Crockett said.

"I think we can largely blame that on the legal system," she said, pointing to the body of legal rulings judging the adequacy of environmental reviews.

It's always a "roll of the dice" whether a project will survive a legal NEPA challenge, so agencies include as much as possible, Crockett said.

"You expect to be sued," Ward told the members of Congress. "You build that into your business plan."