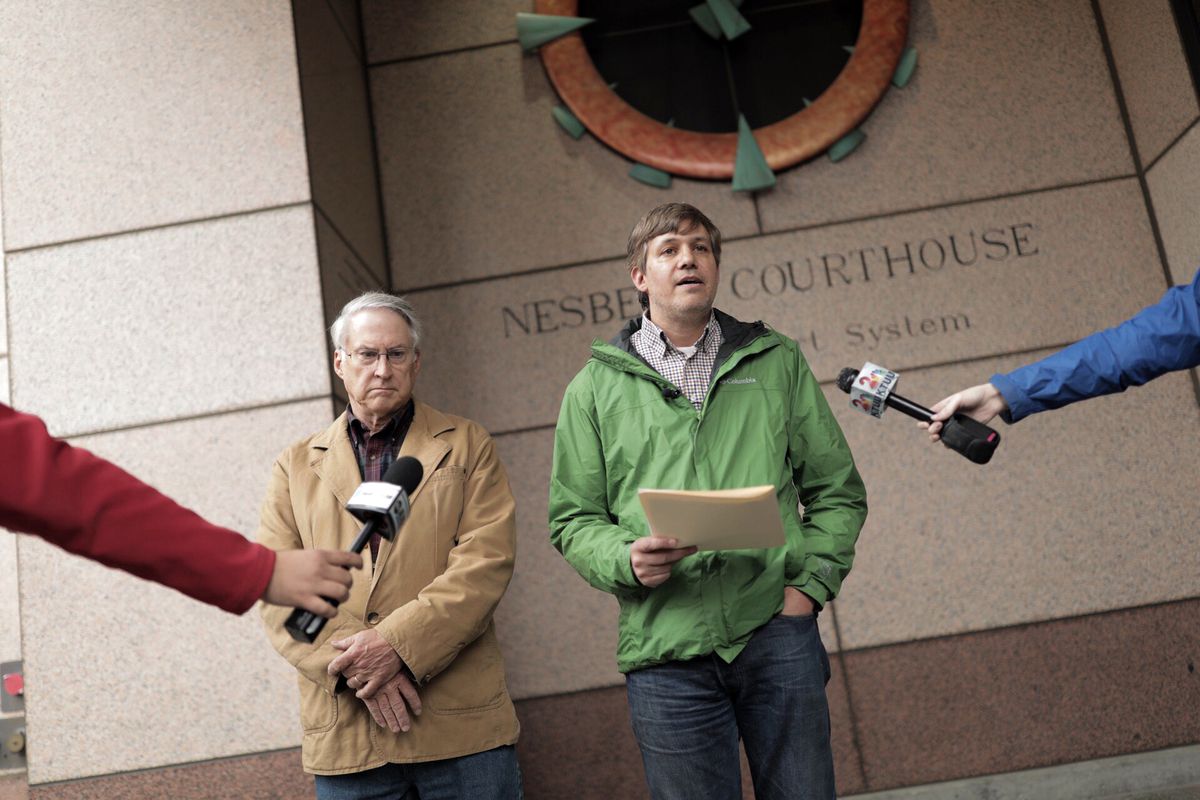 The unanimous decision means that Alaskans won't get an extra dividend payment on top of the $1,022 they received last year — about half of what they would have been paid had Walker not used his line-item veto power.

Wielechowski said Friday that the decision left him "bitterly disappointed."

At a news conference with Halford outside the downtown Anchorage state courthouse, Wielechowski urged lawmakers to advance his proposal to enshrine the historical dividend calculation in the Constitution, putting it out of reach of a future veto or a Supreme Court decision on a similar set of issues. But that step would require legislative approval before a public vote.

"Give the people the opportunity to vote on this issue," he said. "I have absolutely no doubt if it went to a vote of the people, it would pass. We have to get it past the Legislature."

The Supreme Court ruling, based on technical aspects of the Alaska Constitution and legislative law, means that about $650 million will stay in state accounts and remain available to lawmakers as they debate how best to fill Alaska's multibillion-dollar deficit.

The opinion was written by Justice Daniel Winfree. It hinges on two different clauses in the Alaska Constitution.

The first, known as the "anti-dedication clause," bars the state Legislature from earmarking cash for a specific purpose for more than a year at a time — making it so one set of lawmakers can't bind the next to its financial decisions, and allowing the public to change fiscal policies at election time. The clause requires annual appropriations by lawmakers that are subject to a governor's veto.

The second clause is part of the 1976 constitutional amendment that created the Permanent Fund, which creates an exemption to the anti-dedication clause to allow for oil revenue to flow directly into the fund year after year without intervention by lawmakers.

That constitutional amendment, approved by voters, included a section that requires all income from the fund to flow into the state's all-purpose account, the general fund, "unless otherwise provided by law."

In his lawsuit, Wielechowski argued that the Permanent Fund amendment, when combined with a separate law governing the dividend program, exempts the dividend from the "anti-dedication" clause. Without a change to the dividend law, they should be paid automatically, outside of the traditional appropriation process that would make them subject to a veto, he asserted.

But the Supreme Court rejected that reasoning. Winfree, in his opinion, cited the intent of the framers of the constitutional amendment and the voters who approved it, as well as the Constitution's "plain meaning."

Walker's veto was legal, Winfree wrote, because the constitutional amendment created an exemption to the anti-dedication clause only for money flowing into the Permanent Fund — not the money flowing out into dividend checks or any other program.

There is minimal historical evidence that the amendment's framers, or voters, intended to exempt the money paid as dividends, Winfree wrote, while language exempting the money flowing into the fund is "explicitly supplied."

That was a slightly different justification than the one from William Morse, the Anchorage Superior Court judge whose dismissal of the case was appealed to the Supreme Court by Wielechowski and the former legislators.

Morse's ruling was narrower than the Supreme Court's. It said simply that Walker had the power to veto the Legislature's transfer of cash from the Permanent Fund's earnings account into the separate account used to pay dividends.

In a prepared statement, Walker said he didn't enjoy vetoing the dividend but felt he had no choice.

"My decision last year to reduce the permanent fund dividend was, by far, the most difficult decision I have made as governor," Walker said. "It was necessary, however, to ensure there will be future dividends."

Walker urged passage of a fiscal plan "so we can build a stronger economy for years to come."

On Facebook, Wielechowski said the decision was at odds with the vision of Permanent Fund framers like former Gov. Jay Hammond.

"Hundreds of hours of research led me to believe what most Alaskans believe: that this was never the intent of Gov. Hammond or the Legislature that created the PFD laws," Wielechowski wrote.

The Legislature has never approved spending Permanent Fund income on government services, and the fund was once considered the third rail of Alaska politics — fatal to a politician's career if touched.

But with state savings accounts nearly depleted by the last few years of deficit spending by the Alaska Legislature, lawmakers now appear poised to tap the fund's earnings next year. Both the House and Senate approved separate bills earlier this year to fill most of the deficit with Permanent Fund money, though the legislation never took effect because the majorities in the two chambers couldn't agree on the details.

They and Walker also agreed to set the dividend at $1,100 — sharply lower than the amount that would have been available if lawmakers had relied on the historical formula to calculate payments. And Senate leaders have sidelined Wielechowski's proposal to solidify that historical formula in the Constitution.

The Supreme Court's decision Friday underscores that the fund's earnings are "going to be part of the economic solution for the state," said Larry Persily, a former deputy revenue commissioner who's now chief of staff to the Kenai Peninsula Borough mayor.

"Certainly the Legislature could go fund a $2,000 dividend," he added. "But most anyone who can do math knows that's not affordable."