Alaska Gov. Walker, in State of the State speech, urges Legislature to act on budget deficit 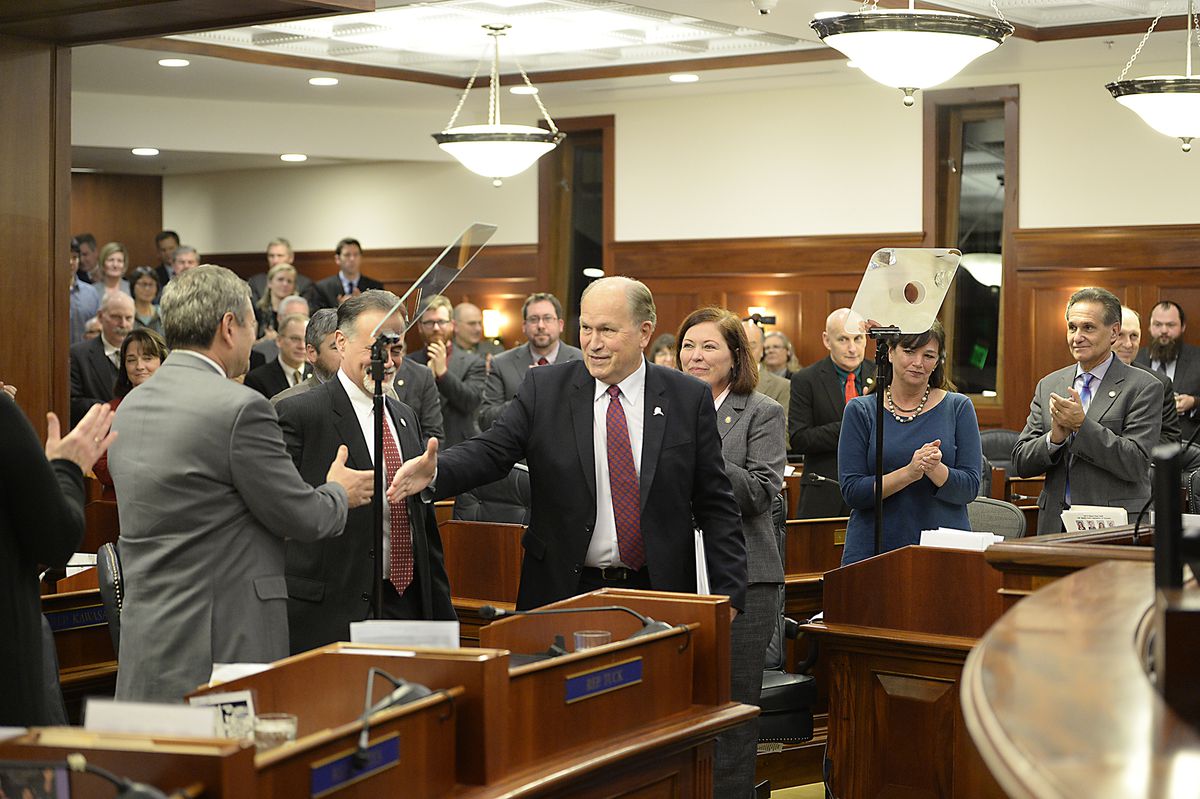 Gov. Bill Walker shakes hands with legislators as he enters the House chamber for his State of the State address before a joint session of the Alaska Legislature at the Capitol on Thursday. This is the fourth State of the State speech Walker has delivered. (Klas Stolpe for the Anchorage Daily News)

Gov. Bill Walker shakes hands with legislators as he enters the House chamber for his State of the State address before a joint session of the Alaska Legislature at the Capitol on Thursday. This is the fourth State of the State speech Walker has delivered. (Klas Stolpe for the Anchorage Daily News)

JUNEAU — Alaska Gov. Bill Walker renewed his call for state legislators to fix the state's big budget deficit Thursday night, telling them not to shrink from the "sweat and mud" that coats constituents when they solve their own problems.

Walker laced his State of the State speech with references to mushing, moose meat and mining, comparing Alaskans' everyday struggles to those faced by lawmakers who have failed for two years to agree on a plan to restructure the state's budget. He described himself as a carpenter from Valdez and Lt. Gov. Byron Mallott as a fisherman from Yakutat.

He described Alaskans at new breweries in Girdwood and Talkeetna, North Slope oil companies and small startups who are "committed to this state."

"They are making tough decisions and fighting for their future," said Walker. "They deserve leaders who are willing to do the same."

The annual speech was Walker's fourth since his election as an independent in 2014. Alaska's huge deficit has defined his four-year term, which ends later this year, though he's running for re-election.

The budget crisis was brought on by a sharp decline in oil revenue, stemming from a crash in prices combined with the long-term fall in production from the North Slope fields. At one point, the state was facing a deficit of nearly $4 billion on its $5 billion annual spending plan.

Walker has attacked the problem head-on, proposing a string of deficit-reduction measures in 2016 and 2017. But in both of those years, in spite of months of extra time in Juneau, lawmakers couldn't reach a compromise to restructure the state's biggest financial asset — the $64 billion Permanent Fund — and ended up dipping into savings accounts instead.

On Thursday, he didn't use that phrase at all, and he didn't bring up the budget until about halfway through his speech.

Instead, he began with stories.

He talked about Chris Apassingok, the Yupik teenager-turned-Native-leader from St. Lawrence Island who faced social media attacks after catching a bowhead whale; he described a Valdez hotel owner who had to rebuild after a fire.

Then he ticked through his administration's priorities: developing new oil fields and the long-sought natural gas pipeline from the North Slope; fighting Alaskans' addictions to opioid drugs like heroin; boosting spending on law enforcement; and responding to climate change's impacts.

By the second half of his speech, though, Walker returned his focus to the deficit, characterizing it as Alaska's sole impediment to progress. And he sharply chastised critics who have focused on deeper spending cuts ahead of revenue-generating measures like taxes or a restructuring of the Permanent Fund.

"They won't identify where the cuts should come from, but they'll resort to cheap caricatures of state workers as nothing more than bureaucrats and paper pushers clocking in at 8 and clocking out at 4:30 without adding real value," said Walker. "The cuts-only plan is no plan at all."

Walker's speech was drafted by the governor himself, aides said, with an assist from his wife, Donna.

It drew endorsements from friendly lawmakers, like members of the mostly Democratic House majority who have largely backed gubernatorial tax and spending plans.

"I share his optimism," said Anchorage independent Rep. Jason Grenn. "And I'm glad that's the tone he wanted to share that with Alaskans."

But some of Walker's proposals didn't go over as well — particularly the one to cut off lawmakers' paychecks if they miss a deadline for passing a budget. That idea drew applause from Walker's cabinet members and supporters in the gallery of the state House chambers, but barely a clap from the 55 legislators seated in front of them.

"The Republicans do not advocate for cuts-only. We only advocate for serious conversation and a reasonable budget. Let's talk about what programs we can seriously afford in declining revenues," Knopp said. He added: "I don't appreciate the fact that he takes the State of the State as an opportunity to chastise the Legislature."

Walker closed his speech with a sports metaphor, saying he's taking the field and asking others not to stay in the locker room trying to keep their uniforms clean, "in hopes of being in next year's team picture."

That message appeared directed at lawmakers — a suggestion they might be tempted to dodge hard votes to ensure they're re-elected.

Anchorage Republican Rep. Charisse Millett responded in kind on her way out, making it clear that she doesn't want to be stuck in Juneau this year past the Legislature's 90-day deadline.

"My only hope is that there's no extra innings," she said.