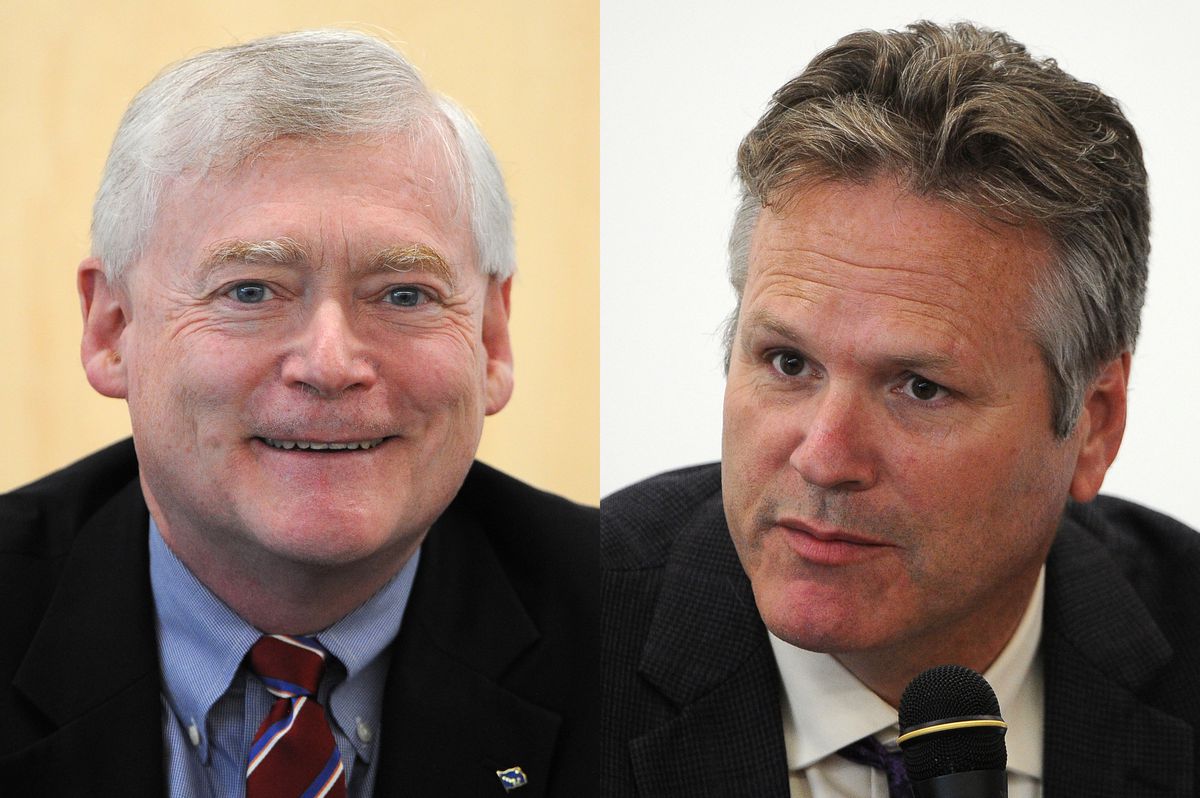 The front-runners in Alaska's Republican primary race for governor faced off Thursday night in a KTVA-Channel 11 debate where they discussed their would-be plans for the Permanent Fund dividend, abortion access, their positions on the Trump administration and more.

Mead Treadwell, a former Alaska lieutenant governor, and Mike Dunleavy, a former state senator, agree on many things. They both said they would vote no on Alaska's Stand for Salmon initiative, aimed at enhancing protections for fish. Both are pro-life, and both said they want to protect Alaskans' annual PFD checks.

Treadwell and Dunleavy have also both made tough-on-crime positions central to their campaigns, but on Thursday described different approaches. Treadwell said he would plan to sign a "series of executive orders" related to crime his first day in office if he becomes governor, and would call for more coordination between local, state and federal governments.

Dunleavy said there needs to be a five- and 10-year plan to "regain Alaska from the criminals." Later in the debate, on the subject of the opioid crisis, Dunleavy said as governor he would introduce legislation to "deal with drug dealers harshly" here.

Treadwell mentioned using money from the state's general fund and cutting money from other programs to fund a response to the opioid crisis.

"This is not a left-right thing, this is a human thing," he said.

Both candidates said they want to restore the PFD, the annual payout to state residents from Alaska's oil wealth fund, to its full amount. Gov. Bill Walker reduced the PFD in 2016.

One moment of tension in the debate came when Treadwell criticized Dunleavy for a Senate vote in July 2016. According to an Anchorage Daily News article at the time, Sen. Bill Wielechowski, D-Anchorage, had asked for the Senate to ask the House to join it in a special session "to override Walker's budget-bill vetoes, including one that reduced the dividend payout."

But then-majority leader Republican John Coghill of North Pole ruled the request out of order. He told Wielechowski that it was tradition for the House to invite the Senate, according to video footage of the Senate floor session. Coghill was sitting in for the absent Senate president, Kevin Meyer, R-Anchorage.

The Senate voted on whether to uphold Coghill's ruling. Fourteen senators, including Dunleavy, voted to uphold the ruling and three senators opposed it.

"I think my opponent's on thin ice," Treadwell said in the part of Thursday's debate about the PFD. "He was part of a Senate that balked."

In a previous interview this week, Dunleavy responded to earlier criticism of that vote.

"All I did was agree to support the ruling of the chair, believing in the future we would have another opportunity to have a vote to see if, in fact, both bodies would come to joint session to override vetoes," he said. "That never happened."

Asked about their positions on President Donald Trump during the debate, Dunleavy said he looks forward to working with him should he become governor.

"I think President Trump has been great for Alaska and great for this country, to be honest with you, and I'm talking about his policies," Dunleavy said.

Asked by a panelist if he would move to restrict access to abortion in Alaska if the landmark ruling was overturned or weakened, Dunleavy said: "I'd have to see what the law that is being proposed or the – whatever the proposal is, I'd have to take a look at it and see if, in fact, that's what would happen."

No matter what the law is, Treadwell said, people will find access to abortion.

"I have no illusions, though, abortion will be available," he said. "So what I want to do is help people find a way to keep their child, have the baby, and support adoption. … I don't know what the Supreme Court's going to deal up for us. I will move to protect life."

Treadwell and Dunleavy also had to give quick answers in a lightning round. The candidates were asked about various state agencies or programs, and then had to answer simply "yes" or "no" as to whether they would make cuts to those departments' budgets.

Here's what they said:

Dunleavy: Not at this time

Treadwell: No for now

Dunleavy: No for now

Treadwell: No for now

Dunleavy: No for now

Treadwell: We have to actually endow the University of Alaska with the land that Abraham Lincoln promised —

Moderator: Yes or no?