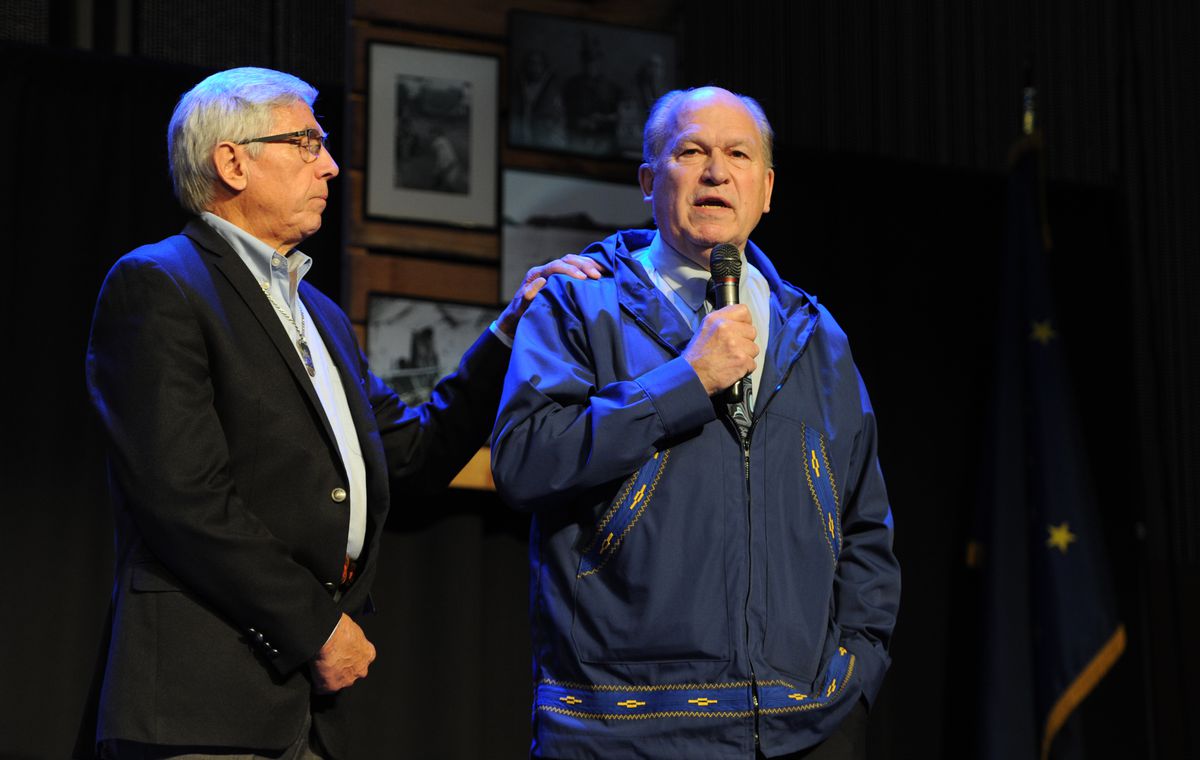 Alaska Lt. Gov. Byron Mallott abruptly resigned from office Tuesday after the disclosure of recent unspecified "inappropriate comments," complicating the crowded race for Alaska governor three weeks before the election. Details about what Mallott said, and to whom, were not immediately clear, though Gov. Bill Walker described the remarks as inappropriate overtures to a woman earlier this week.

A new lieutenant governor, Health and Social Services Commissioner Valerie Nurr'araaluk Davidson, was immediately sworn in Tuesday afternoon. In a brief statement, Davidson said she was "profoundly disappointed" by Mallott's conduct, adding "respect for women, and the dignity of all Alaskans, is our responsibility."

Walker, in a written statement that he later read in a brief news conference with Davidson in his Anchorage office, said, "Byron recently made inappropriate comments that do not reflect the sterling level of behavior required in his role as lieutenant governor. I learned of the incident last night. Byron has taken full responsibility for his actions and has resigned."

Walker said Davidson would assume Mallott's role as his running mate, although Mallott will officially remain on the ballot.

In his resignation letter to Walker, Mallott wrote: "It is a resignation compelled by inappropriate comments I made that placed a person whom I respect and revere in a position of vulnerability….I take full responsibility for this action and apologize to, and seek healing for, the person I hurt."

The letter did not identify the person or their relationship with Mallott.

Davidson was sworn into office during a private ceremony Tuesday afternoon, the governor's office said.

"While I am deeply saddened by the resignation of Lt. Governor Byron Mallott, I am profoundly disappointed by his conduct," Davidson said in the statement, which she later read. "Respect for women, and the dignity of all Alaskans, is our responsibility. I stand ready to serve as your lieutenant governor."

Both Walker and Davidson appeared briefly at a news conference at the governor's office in Anchorage, read the statements that had been issued earlier, then left without taking questions.

"There's a lot to process," Baird said. "We're trying to proceed in a way that's absolutely careful, and that absolutely keeps the victim in mind."

They said the governor initially learned of the comments late Monday afternoon, from Chief of Staff Scott Kendall. That led to a deeper conversation between Kendall and the governor Monday evening, they said.

Jang and Baird said Mallott's comments were made recently and that the person  was not a member of Mallott's staff. Baird would not say if she was a state employee.

Asked if the comments could lead to criminal charges against Mallott, both said, "No."

Later Tuesday, Walker described the remarks as involving inappropriate overtures to a woman, said Baird. The comments were made two days ago, he said.

"It was not work-related," Baird said.

He added that the woman had requested anonymity.

Mallott is married, according to a bio on the Walker-Mallott campaign website.

Walker named Davidson commissioner in 2014, soon after he was elected. Before that, Davidson had served as senior director of legal and intergovernmental affairs at the Alaska Native Tribal Health Consortium.

The resignation of Mallott, a longtime Alaska Native leader from Southeast Alaska, and the appointment of Davidson comes during the week of the Alaska Federation of Natives annual convention in Anchorage. It's the biggest annual gathering of Alaska's indigenous people, with Walker scheduled to welcome the gathering on Thursday and Davidson delivering the keynote address.

Walker and Mallott won the 2014 election on what they called a "unity ticket," named such for their different political party affiliations. Walker is a Republican-turned-independent and Mallott is a Democrat.

Messages with Begich and his campaign manager were not immediately returned Tuesday.

Walker's campaign manager, John-Henry Heckendorn, said Tuesday afternoon that Walker and Begich have been engaged in conversations for the past several days "about a path forward, what's best for Alaska." Those ongoing conversations are unrelated to what's happened with Mallott, Heckendorn said, adding that he was not able to talk about any of the details of those conversations.

When asked what he meant by a "path forward," Heckendorn said: "A path forward in the election that doesn't result in Mike Dunleavy being governor."

Dunleavy said in a statement that his campaign remained "focused on restoring trust in state government."

"We need safe neighborhoods, a healthy economy and full Permanent Fund dividends," he said. "This campaign has always been about the people of Alaska, not politicians."

Heckendorn would not say whether it was the Walker campaign that reached out to Begich.