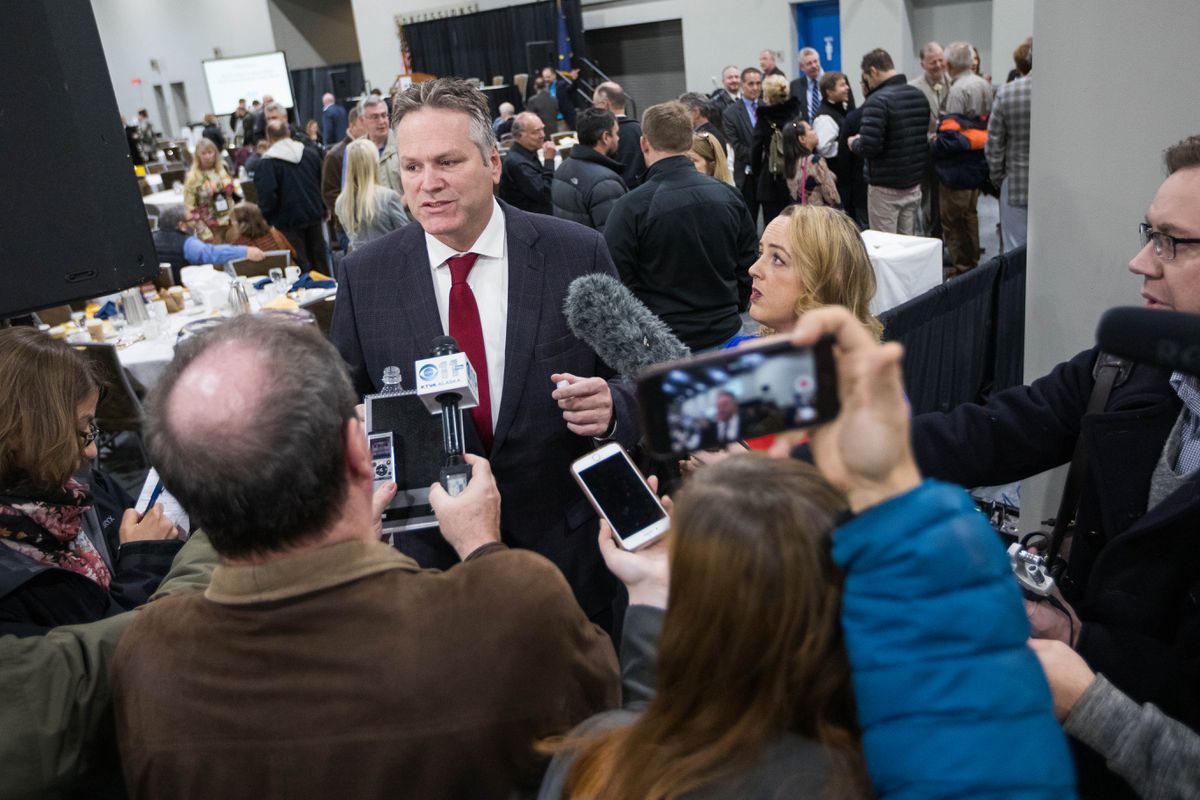 Alaska's next governor, Republican Mike Dunleavy, announced Thursday that he had selected Tuckerman Babcock to be his chief of staff when he takes office next month. Babcock was the chairman of the Alaska Republican Party, and resigned from that position at 2 p.m.

Dunleavy made the announcement at the Alaska Miners Association annual convention in downtown Anchorage, during a speech that also focused on resource development. It was his first high-profile appearance since Tuesday's election.

"I mean this state, in my opinion, if everything works out, is gonna be humming here in just a few years. … You're going to have to put on your seatbelts because it's not going to be a slow crawl. We're gonna pick up speed here real fast."

[Related: 'It's going to be rolled out pretty quick.' Here's everything Gov.-elect Dunleavy said about super-sized Permanent Fund dividends.]

Dunleavy also announced members of his transition team during his speech. Afterward, he expanded on his remarks in a short news conference. He also talked to reporters about Alaskans' Permanent Fund dividends, the state budget, Medicaid, the process of transitioning into office, and more.

Dunleavy made the PFD a cornerstone of his campaign, saying he wants to pay out full dividends using the formula in state law that lawmakers have traditionally used. Dunleavy also wants to pay Alaskans back the money he says they're owed after three years of capped dividends. During the race, Dunleavy estimated that amount at $3,733 per eligible Alaskan.

Asked on Thursday what the time frame is for repaying that money, Dunleavy said: "That's part of our process. Early on, we're gonna develop an approach to make sure that that happens. So, as we go into the opening of the session, we'll have that rolled out."

His goal is that the PFD be paid in cash, he told reporters Thursday, adding, "We are working on some ideas regarding land. We have 100 million acres of land, very little of it's in private hands. We've got to make a decision as a state as to what we want to do with our own state land."

Dunleavy's administration plans to review the state's Medicaid program and "see how we can improve upon it," he told reporters.

"Take a real hard look at Medicaid and see if it's something we can sustain," he said. "Everybody wants something, we know that. But if we're not able to sustain programs, I think it's kind of a disappointment for the people of Alaska to rely on something that we can't sustain."

Dunleavy said he hasn't had conversations yet with Gov. Bill Walker, an independent, about the state budget.

Asked about his plans for the operating budget, Dunleavy said: "We're going to work on that, but all I can say is, get ready."

Dunleavy also announced that his campaign manager, Brett Huber, will be his senior policy advisor. That means Huber is "part of the inner circle, has a huge role in where we go with the state of Alaska," Dunleavy said. Both Babcock and Huber are "a good fit for starting off this administration," he said.

Babcock is a longtime Alaska political insider and has been GOP chairman since 2016. He's been a legislative aide for several lawmakers, was executive director of the state reapportionment board, was an executive with Matanuska Electric Association and has been involved in many political campaigns.

"I've known Tuckerman for years. I have a lot of faith in him, we have a pretty good relationship, he's pretty sharp, he's got experience," Dunleavy said. "Same with Brett Huber."

Huber was a legislative aide and Dunleavy's chief of staff when he was a senator and was executive director of the Kenai River Sportfish Association and president of the Alaska Outdoors Council.

In a statement announcing the press conference, Dunleavy's team said he would be announcing cabinet appointments. Babcock and Huber's were the only positions outside of the transition team announced.

"We're working on the others and announcements will be rolling out every day," Dunleavy told reporters.

Glenn Clary is the new chairman of the Alaska Republican Party, taking Babcock's place. Clary, a longtime pastor at the Anchorage Baptist Temple, was the vice chair. In addition to being chief of staff when Dunleavy takes office, Babcock is the chair of Dunleavy's transition team.

Thursday's news conference was Dunleavy's first since he was elected to become governor. During his speech beforehand, he also brought up coal.

"Red Dog, Greens Creek, Usibelli, and that's right — coal. Not just lead-zinc — coal," he said, and the crowd applauded again. "We're looking at some potential big finds and getting those online."

Dunleavy, a former state senator from Wasilla, won decisively over Democrat Mark Begich in the Alaska governor's race. With 98 percent of precincts reporting, Dunleavy had 52 percent of the vote to Begich's 44 percent. Begich conceded Wednesday morning.

Dunleavy also announced on Thursday the launch of a website, governormikedunleavy.com, where people can apply for positions with the administration and contact the team.

He has named the following members of his transition team:

• Gina Ritacco, transition director of boards and commissions. She was a legislative aide for Dunleavy when he was a state senator and was a campaign manager for state Sen. Mia Costello, R-Anchorage.

• Stacey Stone-Semmler, transition legal counsel. Stone-Semmler is a partner with the law firm Holmes Weddle & Barcott in Anchorage. She represented the Republican Governors Association and Families for Alaska's Future-Dunleavy in hearings with the Alaska Public Offices Commission this year after complaints were filed against the groups.

Gov.-elect Mike Dunleavy is expected to announce several members of his transition team as well as cabinet appointments during a news conference at 1:30 p.m. Thursday.