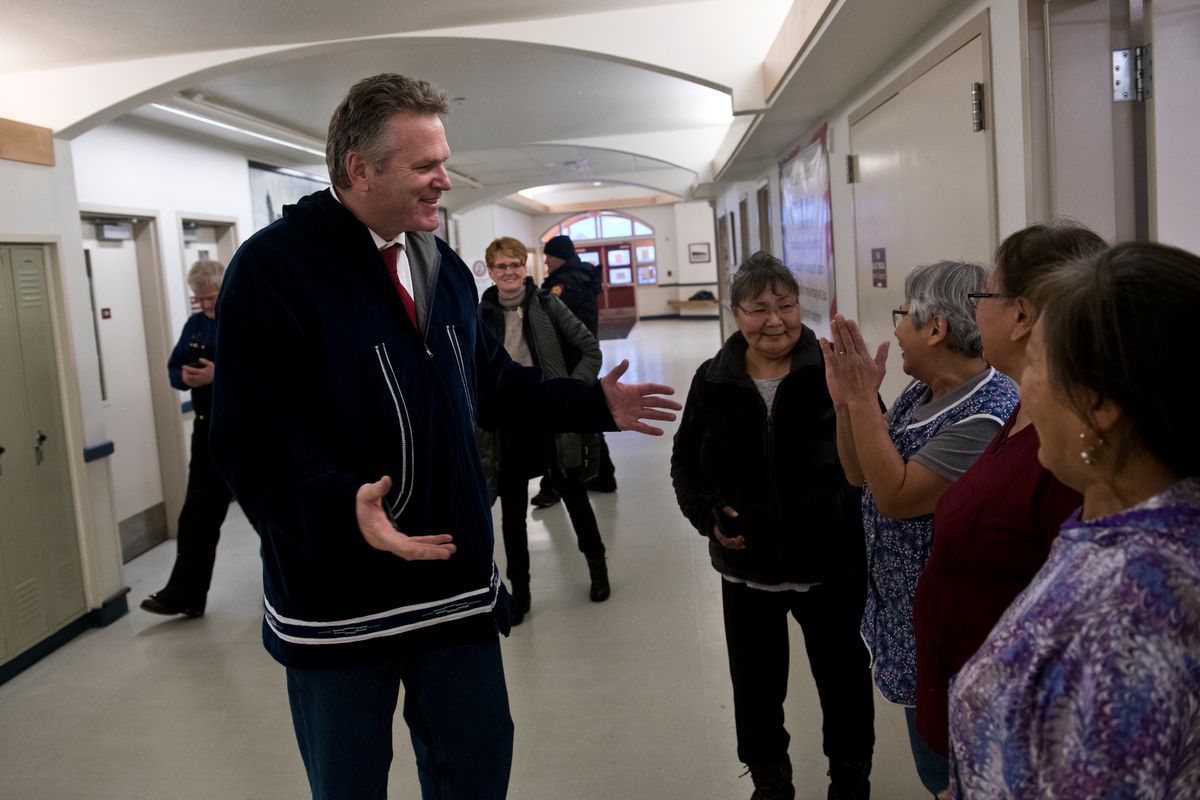 Gov. Mike Dunleavy is greeted at the Noorvik School on December 3, 2018. His inauguration was supposed to happen there, but weather caused his delayed arrival. He was inaugurated in Kotzebue. (Marc Lester / ADN)

Gov. Mike Dunleavy is greeted at the Noorvik School on December 3, 2018. His inauguration was supposed to happen there, but weather caused his delayed arrival. He was inaugurated in Kotzebue. (Marc Lester / ADN)

Speaking to inauguration crowds in Northwest Alaska, Dunleavy repeated campaign promises of battling crime — “We are not going to tolerate any more sexual assault," he said in Kotzebue — and improving rural education. He has also vowed to deliver a super-sized Permanent Fund dividend after his predecessor, independent Gov. Bill Walker, fell out of favor, in part, because of his insistence on using fund earnings to help pay for government services.

As a candidate, Dunleavy was criticized by opponents who said his promises would eventually deplete Alaska’s piggy bank without refilling it through taxes or other means. Now joined by a Republican-controlled Legislature, Dunleavy takes the reins with the potential to make big changes to life in Alaska.

[Dunleavy sworn in as governor after a very Alaska travel glitch]

Hours after he was sworn in to the state’s highest political office, Dunleavy spoke to Daily News reporters about what he plans to do and how he says he would pay for it.

Q. You talked today in Kotzebue and Noorvik about public safety in particular Bush public safety — saying it was your top priority?

A. That is job No. 1. We have to make sure that Alaskans are safe whether it’s urban Alaska or rural Alaska. And that is what we are gonna focus on.

Caption
Noorvik elders sing to honor Gov. Mike Dunleavy. Gov. Mike Dunleavy is greeted in Noorvik on December 3, 2018. His inauguration was supposed to happen there, but weather caused his delayed arrival. He was inaugurated in Kotzebue. (Marc Lester / ADN)
Wait 1 second to continue.

Q. There are dozens of villages with no police at all. What is the state’s role in fixing that problem?

A. We have a role to make sure folks are safe. This is our first day. It’s a couple hours old, this administration. But we’re going to be having meetings this week about how to put our public safety approach into place. We’ll be naming a couple more cabinet members on Wednesday. Once we do that, we’re going to start to roll out a series of initiatives to make Alaska safer.

Q. Were any prosecutors fired today?

A. I’d have to double check on that. I know that a number of folks got a letter to send in their resignations and I know that there’s going to be some discussions with people. The vast majority of people are going to end up most likely being brought back into the administration.

Q. The one thing I didn’t hear you say today — but speakers in Noorvik talked about — was climate change or global warming and their concerns about the weather. What’s the state’s responsibility?

A. I came from Pennsylvania, which was a smokestack state. Places like Pittsburgh, Philadelphia. Alaska’s footprint in terms of being a contributor to pollution or however you want to word it is pretty small compared to other states in the U.S. So my focus has been trying to create jobs for our kids and grandkids so they don’t have to leave the state.

The issue of global warming, in many respects, it’s still being debated as to how to deal with it, what exactly is causing it. I know there’s a lot of folks and scientists who believe that man is contributing to this. But the question is, what is Alaska’s role in this? What is Alaska doing?

Alaska is being affected by erosion, there’s no doubt about it. Whether it’s Barrow, Kivalina, Shishmaref and points south. So that’s going to be the focus of this administration and the federal government, is working together and seeing what are we going to do with those communities. Because if the storms keep rolling in, obviously there is going to be more erosion.

Q. Today you talked about not closing rural schools. You talked about beefing up police in the Bush and keeping your promise on a big dividend. All those things are expensive. How can you pay for them when we are in a time of low revenues and bad prospects?

A. You pay for the PFD with $19 billion in the Earnings Reserve. That’s not a hard one.

A. $18 billion, 800 million. Projected to grow over the next couple months. Probably will surpass $20 billion here shortly. But nonetheless, that’s how you pay for the PFD.

Your educational system, what I’ve talked about is working with governmental entities, the federal government, tribes and others to potentially build dorm capacity in some of our regional hubs like Kotzebue. And they’ve already done that. We have dorms in Kotzebue.

But how many other dorms do they need for term type of regional schools where kids, for example, from Noorvik can go to Kotzebue and learn how to drive. Get certifications in a number of different areas. Take some challenging courses such as physics labs and biology labs, which you might not be able to get in a smaller school. That’s what we’re looking at doing, but partnering with the federal government, partnering with some of the tribes.

Q. After the quake hit, did you think about whether or not to have the ceremony today and wonder if it might pull you away for too long from where you’re needed?

So the damage was, given the size of that earthquake and the aftershocks, the damage was a lot less than I think most of us thought. So the response to deal with that is more than adequate.

Folks out here put a lot of effort into this event, so we figured we could get out this morning, do the event and get back. We’ll be back in Anchorage by about 5 o’clock.

In many respects about commitment. We wanted to have it here. We told them we were coming. People spent a lot of time, a lot of energy putting this together. … It was important.

Too often there are parts of Alaska that feel forgotten.