What Murkowski has to say on Pebble, the governor’s proposed budget cuts and the Mueller report 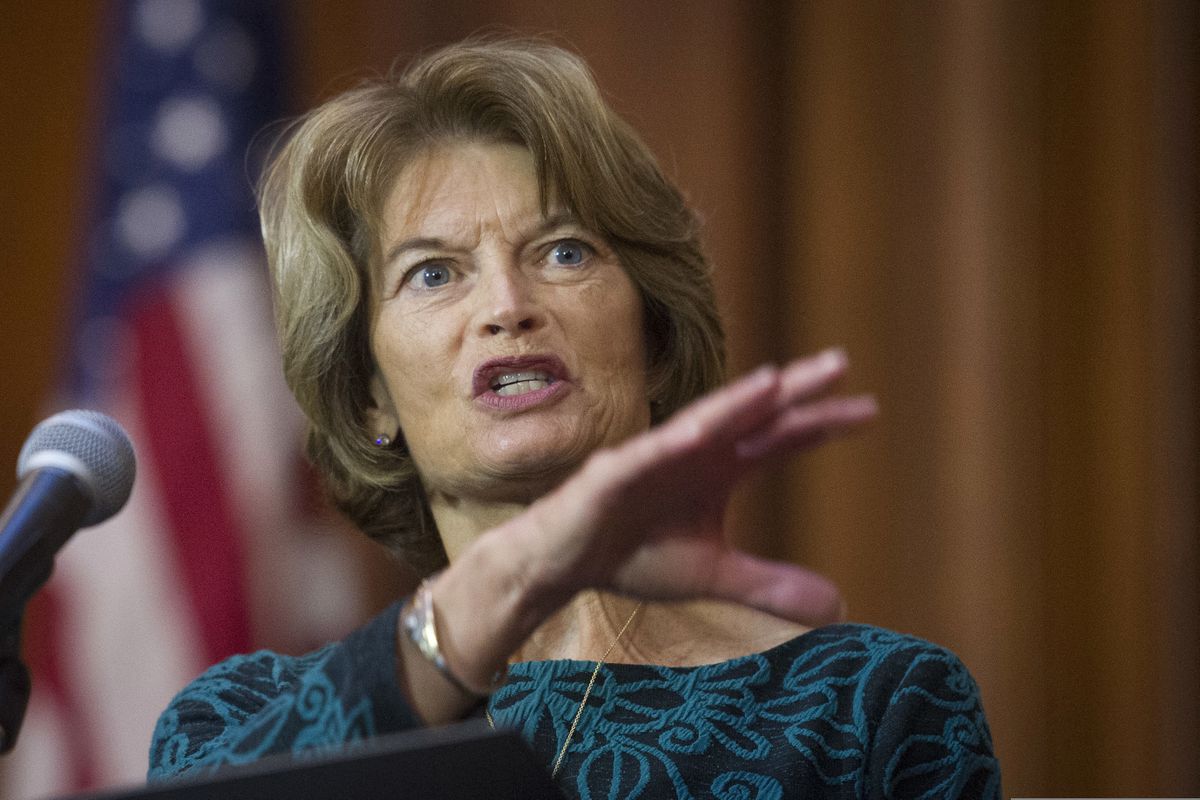 Sen. Lisa Murkowski, R-Alaska, speaks on Dec. 11 at EPA headquarters in Washington. Murkowski says she is likely to support a resolution of disapproval over President Donald Trump's declaration of a national emergency to secure more money for a wall on the U.S.-Mexico border. (AP Photo/Cliff Owen, File)

Sen. Lisa Murkowski, R-Alaska, speaks on Dec. 11 at EPA headquarters in Washington. Murkowski says she is likely to support a resolution of disapproval over President Donald Trump's declaration of a national emergency to secure more money for a wall on the U.S.-Mexico border. (AP Photo/Cliff Owen, File)

In an hourlong interview with the Anchorage Daily News editorial board and reporters Friday, Alaska’s senior senator said special counsel Robert Mueller’s report on the inquiry into Russian interference in the 2016 election should be made public. Sen. Lisa Murkowski, R-Alaska, also said she’ll likely call for more public-comment time on a federal review of the Pebble copper and gold prospect.

She explained her thinking on other issues, saying she would likely support a House resolution of disapproval seeking to block President Donald Trump’s national emergency declaration to secure funding for a U.S.-Mexico border wall. She also expressed frustration with the impact Gov. Mike Dunleavy’s proposed budget could have on rural Alaska, but gave him kudos for raising tough topics.

This transcript has been edited for clarity and brevity.

ADN: On the Mueller report, do you have an opinion on whether that should be made public?

Murkowski: I believe it should be made public, and I had that discussion with (U.S. Attorney General) Mr. William Barr before he was confirmed. What he told me was that he also felt that, just for the integrity of the process and for all that has gone into the Mueller report, that he felt that it would be important.

ADN: Is the U.S. Army Corps of Engineers’ 90-day public comment period enough time for people to review and comment on the 1,400-page environmental draft review of the Pebble mine project in Southwest Alaska?

Murkowski: I am looking at (the report) and saying, I think, given the size and scope, and again the Alaskan interest, the public interest in this, it’s probably not going to be sufficient.

So I think we just need to be prepared that we’ll probably be joining in (formally) asking for a longer comment period.

ADN: (Noting President Donald Trump’s emergency declaration to secure border-wall funding) Can you discuss Congress’ slow “abdicating” of power to the executive branch and how do you reset that or take a fresh look at that?

(When we enacted the 1976 National Emergencies Act), what we failed to do was really put any criteria for how we would define a national emergency.

There have been 59 that have been declared underneath this act, and all of them to this point in time have been matters where they were not controversial in the sense that nobody in the legislative branch looked at it and said, “Well, that’s an overreach." ...

But because we’ve never objected to that, you’ve had this little bit of creep with every one of these that’s come on. “Well, yeah, of course the president can do that.” Now we’re at a point where this is different. There’s a great deal of argument whether this constitutes a national emergency, does this constitute a disaster, and then does the president have the legal authority to do this?

I think that there’s probably very arguable grounds that he has the authority because of what we’ve laid down in the National Emergencies Act. The real question is not whether he can, but whether he should. Is this a reach further than anyone has done in any of these previous ones? This is the first time where there has been basically a reach over beyond what the Congress has specifically done.

So this is a step that has not been done before. So, the place that we are at right now is that if we as the legislative branch don’t rein that in, if we just say, “Well, we don’t like it, wish you hadn’t done it,” then what we have done is we are expanding executive authority by acquiescence, and that to me is more than a slippery slope, and so what do you do? ...

I think the older I get and the more I’ve been in the Senate and my experience in the (Alaska) House, I’m realizing the institution is really important. And the institution in my view is being degraded when we step back and say, "Hmm, we’re going to turn an eye on that level of overreach, that we consider it overreach, but we’ll let you get away with it, because ultimately, it’s a policy I agree with, and so if I agree with it. I’ll just give you a pass on that.”

That’s dangerous for both sides, I think.

ADN: You sound like a yes on the resolution of disapproval (that the House is expected to vote on Tuesday). Is that accurate?

Murkowski: If we just sit back and say, “Well, we’ll put (the president’s) priorities ahead of (funding) we already assigned,” well, then the example that everyone is using out there is that when (Democratic Massachusetts Sen.) Elizabeth Warren becomes President Warren, and she says, “There is no greater crisis or disaster than climate change, and we need to implement the Green New Deal today.” And she says, “President Trump did it for his priority, and therefore I have the authority to do it with mine.”

So based on where we are now, my understanding of what the House will be voting on if it comes over to us like this (as its currently crafted), I would vote to support the resolution of disapproval.

ADN: (Gov. Dunleavy’s proposed budget, with many cuts falling on rural areas, calls into question why Sen. Ted Stevens and others have taken steps to preserve culture and life in rural Alaska.) Why do we do that?

Murkowski: ... So if you’re an outsider coming in, you look at your profit centers and where you make money in the state and where you lose money big time, and it’s really easy to say, “Ugh, Marine Highway System, get rid of that loser.” And yet as somebody who was born in Ketchikan, raised in Wrangell, raised in Juneau, how did families get around? It was how the produce came to us. If it didn’t come up on the barge, it came down from Juneau, the basketball teams, the band, everything. This is our highway. And so I look at it and say, “If you really want to try to pencil it out, do your highways really make you a lot of money around here?” No, it’s extraordinarily expensive per mile to build a road around here. We accept that, but somehow or other, when it’s the Marine Highway System, “We need to get rid of that.”

And in fairness, the governor deserves some credit for putting some really hard things out there because we do have to be honest with our budgeting. We do have to be honest with some of the inefficiencies that we have built into a system that have just been allowed to continue. And so I do not fault him at all, or his team. I give them kudos. But I do hope that in addition to looking at how the dollars line up, that there is some appreciation that the answer is not to allow rural Alaska to collapse and move everybody into the city. I think that we would be a much poorer state for that.