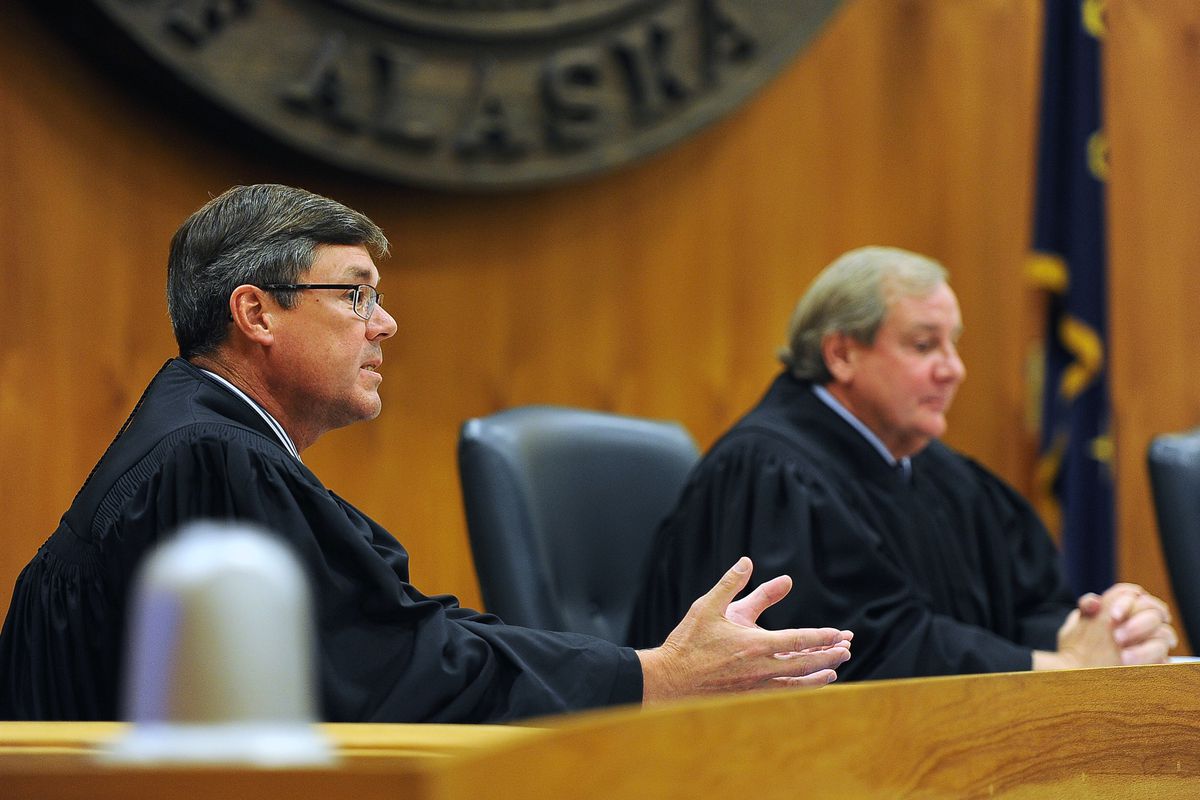 JUNEAU — Founders of the state’s constitution intended for a governor to appoint for judgeships candidates nominated by the Alaska Judicial Council, the chief justice of the Alaska Supreme Court said.

Chief Justice Joel Bolger, in recent remarks, defended the council’s process for vetting and nominating candidates after Gov. Mike Dunleavy filled one vacancy on the Palmer Superior Court but refused to fill another.

One of the seats is vacant. The second is soon to be.

Dunleavy, in a letter to the council last week, said he would not be making a second appointment from a list of three finalists the council sent him. He said there were qualified applicants "inexplicably" not nominated and requested the council's reasoning.

Dunleavy spokesman Matt Shuckerow said the governor looks forward to scheduling a meeting with Bolger to further discuss the matter.

The council's website shows there were 13 applicants for the two seats but two withdrew and a third was appointed to another judgeship.

Under the constitution, the governor is to fill a superior court vacancy by appointing one of two or more persons nominated by the council. The Alaska Supreme Court has held the council is within its right to send one more nominee than the number of positions to be filled.

State law calls for a governor to fill a superior court vacancy or appoint a successor for an impending vacancy within 45 days after receiving nominations from the council. That period has passed.

Susanne DiPietro, the council's executive director, said the seven-member council plans to meet Thursday to discuss its options. She did not get into what those might be.

She said former Govs. Wally Hickel and Frank Murkowski pushed back on nominations but filled seats within 45 days.

Bolger's comments were posted on the commission's website. DiPietro said they were made at the start of a commission meeting Friday.

Bolger said the council, on which he serves, aims to nominate the most qualified candidates. He said areas considered include professional competence, fairness, temperament, legal and life experience and commitment to public and community service.

Each council member votes independently, Bolger said. If a candidate receives four votes, his or her name is forwarded to the governor, he said.

It is not uncommon for the council to nominate a person for one position but not for another, Bolger said. Strength of the other candidates, the nature of the open position and the community the judge will serve are considerations, he said.

Democratic Rep. Matt Claman of Anchorage said Friday that Dunleavy "is failing to uphold the constitution" in the matter and has failed to follow the rule of law.

Shuckerow said by email Monday that Claman "should join the Governor in asking for more openness and transparency in this process adopted by the Judicial Council."

Claman scrapped a Friday hearing on one of Dunleavy's crime bills after speaking about the judicial matter and what Claman said was a denial by the governor's office of a travel request by the state public defender. Claman said travel for public defender Quinlan Steiner was denied for the remainder of session.

Given that, Claman said he would only hear Anchorage-based staff with the administration testifying on crime bills by phone until travel for Steiner is approved.

Steiner said he was denied travel for a criminal justice commission meeting this month that ultimately wound up being paid for by the commission and for hearings on crime legislation and the Public Defender Agency's budget last week.

He said he was at one point asked to submit a travel plan, then was told by a deputy commissioner in the Department of Administration, under which his agency falls, that Dunleavy's chief of staff denied travel for the rest of session then on Friday was asked for a travel plan that he said he will submit.

Steiner said he is trying to make a case for additional funding because his agency has more cases than it can handle and without more money could have to start refusing cases, which he said would disrupt the criminal justice system. Being at hearings in person also can be advantageous in weighing in on bills and helping resolve any potential snags, he said.

Dunleavy's office has said it wants to end nonessential travel, and Shuckerow said previously that the Office of Public Advocacy and the Public Defender Agency have said they are underfunded.

The governor's office "has approved certain travel in the past, but is currently requesting a formal travel plan for the remainder of the legislative session to consider what is within reason," Shuckerow said.

He said if committee chairs prefer testimony by phone, “that is perfectly acceptable to the Administration.”